Minutemen shoot 28.6 percent in second half 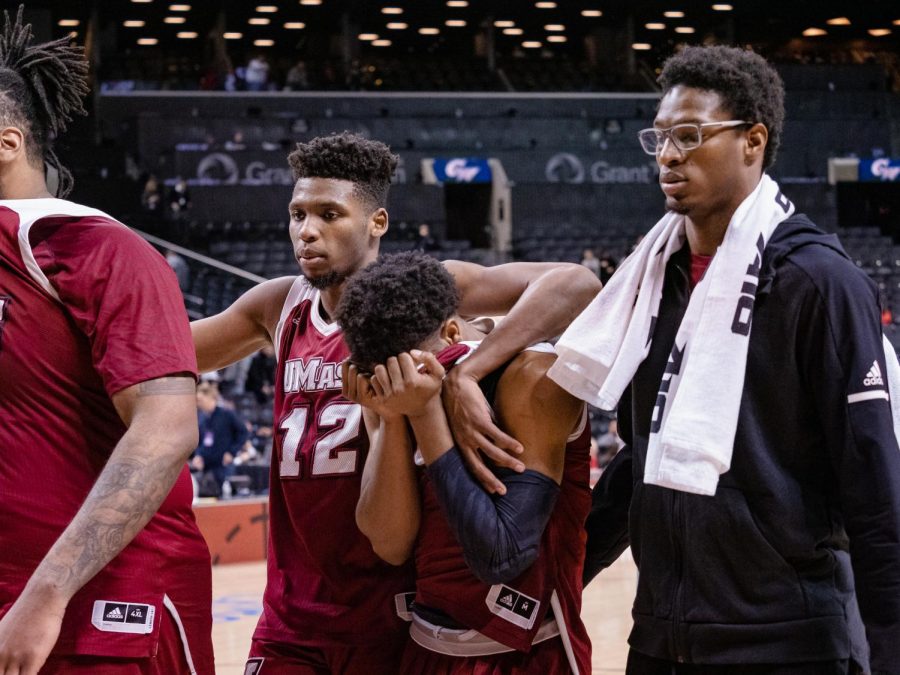 BROOKLYN, NEW YORK — The Massachusetts men’s basketball team’s season came to a crashing halt in the first round of the Atlantic 10 tournament, falling to George Washington 68-64 in overtime.

In what has been a challenging year on the offensive end, the Minutemen (11-21, 4-14 A-10) once again struggled to put the ball in the basket. After opening the game a scorching hot 10-for-13 from the field to take a 14-point lead, UMass was ice cold the rest of the way, finishing just 35.9 percent from the field and 28.6 percent from three.

Much of this was due to ball movement, with the Minutemen carving up the Colonial (9-23, 4-14 A-10) zone early by tossing five assists in the first five in a half minutes, but failing to move the ball once George Washington switched to man-to-man, totaling just two assists in the final 39 and a half minutes of the game.

UMass would finish with 16 turnovers in the game.

“We missed some guys at times,” Minutemen coach Matt McCall said. “We turned it over some there, on post doubles when the ball was going into Rashaan [Holloway]. Had some bad, bad, bad turnovers. Had some chances to make some game-winning plays down the stretch. I thought our ball movement was really, really good in the first half and I thought their adjustment to go man-to-man, our guys got taken off guard a little bit.”

UMass had multiple chances to win the game in regulation, having possession with six seconds left and the game knotted at 56, but the Minutemen were out of sync on the inbounds play.

With players running to the wrong spot, Keon Clergeot, who finished with a career-high 25 points in the absence of Luwane Pipkins, caught the ball near the sideline, took a dribble in before putting up a contested three that fell way short of the rim, sending the game into overtime.

On the possession before, the Minutemen were inbounding under their own basket and got the ball inside to Rashaan Holloway, but the big man had the ball stripped out of his hands.

Much like the entire season has been, it was missed opportunities that did UMass in.

“We did a poor job at the end of regulation executing, twice,” McCall said. “Drew up two different actions there. One we were trying to get Carl Pierre coming off a wide screen set by Rashaan and allow him to create a little bit there. And then was trying to get Keon off a double pick-and-roll end of regulation, trying to get him in the lane and screen away for Carl for the shot.”

Terry Nolan Jr., who finished with a team-high 20 points for the Colonials, opened the overtime period with a three to give George Washington the early advantage.

Already in the bonus, the Colonials were able to get to the charity stripe and convert — while the Minutemen continued to struggle putting the ball in the basket — to take a five-point lead with 3:19 to play.

Much like the prior 40 minutes of action, the two teams went stagnant offensively, with a Clergeot layup making it a three-point game before a Justin Williams free throw with 1:31 remaining put George Washington back up by two possessions.

That’s when the UMass offense began to find its stride for a small stretch. Clergeot got to the rim on the next possession and converted a tough runner in the lane, and Nolan would miss a three on the other end.

Freshman Sy Chatman grabbed the board for the Minutemen, who pushed the ball up the court, with fellow freshman Tre Wood taking it to the rim. Wood’s layup was blocked, but Chatman was there to clean up the miss and knot the game up with 39 ticks on the clock.

It didn’t take the Colonials long to answer, as Nolan got to the rack with ease, finishing the layup to take back the lead.

UMass called a timeout, this time getting better execution and got Pierre going to the rim, who was fouled but would go one-for-two from the line, forcing the Minutemen to play the foul game the rest of the way, the difference being George Washington going 7-for-12 from the stripe in overtime to UMass’ 2-for-6.

With the season coming to a close, McCall understands how important it is for the culture to change over the offseason, as the Minutemen have been bounced within the first two rounds of the A-10 tournament the last two seasons, and the team showing little growth this year.

“This is the most important summer since I’ve been here, as a head coach, for our program moving forward” McCall said, “and it’s time that this program take a huge, huge step forward because we’ve been getting knocked back and getting our teeth set in, and it’s time that we march forward.”