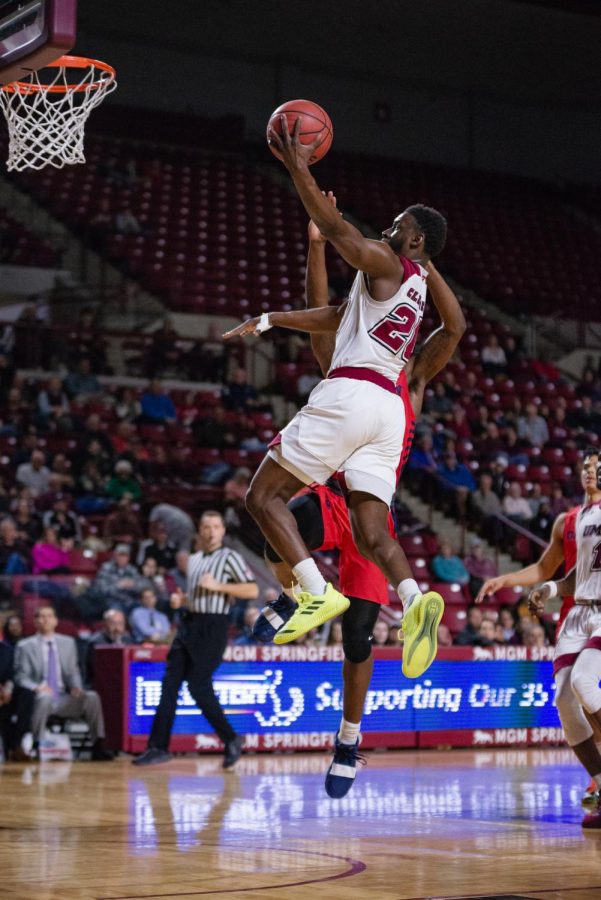 Coming into the final home game of the 2018-2019 season, the Massachusetts men’s basketball team is looking to build momentum heading into the Atlantic 10 tournament.

Nearing the end of a disappointing campaign, UMass (10-19, 3-13 A-10) is statistically eliminated from earning a bye in the tournament heading into Wednesday night’s game against Richmond (12-17, 6-10 A-10), guaranteeing that the Minutemen will play on the first day of the tournament. But UMass still has a chance to build some momentum with strong showings in the final two games of the season, against Richmond and Rhode Island.

“I said to Luwane [Pipkins], our main thing is to stand together,” center Rashaan Holloway said. “Through the ups and downs, let’s play together. Do what we have to do to get wins. We had a rough middle of the season, we’re having a rough ending, but we only can win games from now. Let’s just go out there and play together, see what happens.”

As the Minutemen have struggled in conference play, coach Matt McCall has constantly cited a lack of consistent effort and teamwork as the causes for UMass’ woes. Wins over Richmond and Rhode Island, both in the bottom half of the A-10, would be a reason for hope that the Minutemen might be able to string together wins in the conference tournament.

Another reason for optimism is the expected return of Pipkins, who has been nagged by a hamstring injury for the past month. A preseason contender for A-10 Player of the Year, Pipkins has struggled with shooting woes and missed time to injury, but returns in time to potentially round into form for the most important games of UMass’ season.

Along with Pipkins, freshman Tre Wood is expected to see significant minutes running the offense, while fellow ballhandler Keon Clergeot is 50-50 with a thumb injury hampering him since the trip to George Washington.

“It’d be nice to have all three of them out there, to be honest with you,” McCall said. “Keon couldn’t really do much the George Washington game. We haven’t had a full, healthy roster the entire conference season, so the more guys we can get back before Brooklyn, the better.”

Injuries have taken their toll in the back half of conference play, as Curtis Cobb, Samba Diallo and Khalea Turner-Morris are out for the game against Richmond. The loss of Diallo particularly stings, as he had greatly strengthened the Minutemen on defense before he went down.

On the other end of the court, UMass will have to contend with forward Grant Golden, who was named to the preseason A-10 All-Conference team and currently leads Richmond with 17.9 points and seven rebounds per game.

“I think Golden is a terrific frontcourt player, can hurt you in a lot of different ways,” McCall said. “He really hurt us last year up at their place. Physical, can play with his back to the basket, can step out and shoot.”

For UMass, beating Golden inside will be key, as over-eagerness to shoot from deep has cost the Minutemen at times this year.

Playing in the Mullins Center for the final time this season could also give UMass a boost. Despite a dismal overall record, the Minutemen have posted an 8-8 record at home, and all three of their A-10 wins have come at Mullins.

UMass will get a chance to add one more Wednesday night against Richmond, with tip-off scheduled for 7 p.m.