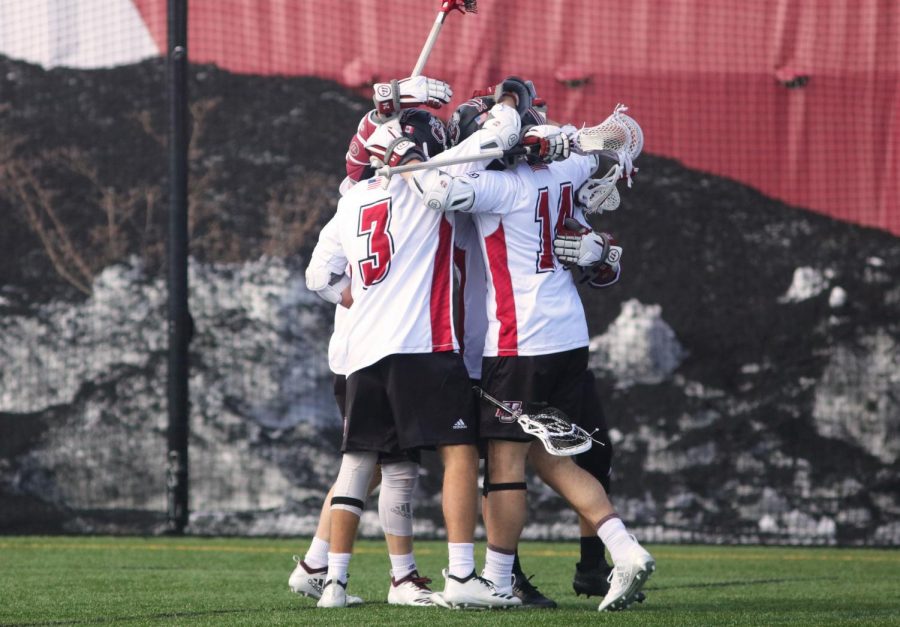 Coming off a near-upset of No. 4 Yale this past Saturday, the Massachusetts men’s lacrosse team came out strong over Albany on Tuesday and never looked back in its 14-8 win over the Great Danes.

Albany (1-3) proved to be an interesting opponent as it was just coming off of a close game with No. 3 Cornell, losing by just one point in a shootout 17-16.

The Great Danes scored once in the first quarter, but it was UMass who dominated with one more from Philpott, finishing the quarter 3-1.

The Minutemen controlled the center, with faceoff specialist Tom Meyers contributing 19 wins of the 26 faceoffs taken. In addition, Meyers had a career-high-tying 13 ground balls. This proved to be advantage for UMass offense over Albany.

“The thing you have to worry about with Albany is them going on runs,” said coach Greg Cannella. “They had two runs in the game in which they scored multiple goals, one time three goals. Your faceoff guy at that point in the game, Meyers, he wins the draws and kind of shuts that down a bit, their possessions, their motion a little bit.”

UMass started off the second with Procyk’s first goal of the game, which was quickly answered by an Albany goal to bring it to 4-2 five minutes into the quarter. From there, the Minutemen scored another by Spencer, the senior’s second of the game. Albany managed another as well, bringing the score to 5-3 at the half.

“It was 5-3 at half,” said Cannella. “We had just about 30 shots at half time. We felt we didn’t finish the goal very well, and we told our guys to keep shooting, got to get the opportunities. Fortunately for us, we went after it in the second half.”

The Minutemen came out explosive in the third quarter scoring five goals, including Philpott’s third goal to make it a hat trick. Meyers also had quite the quarter, racking up seven of the nine faceoffs taken in the period. The quarter ended with UMass up 10-6, which was potentially just close enough for Albany to pull ahead still.

“We made a lot of saves,” said Cannella. “We got the ball off the ground, we won a lot of faceoffs which gave us opportunities. It’s more about scoring when playing Albany, because they can score. But it’s also about the ground balls, the faceoffs and the goalie play.”

In the fourth, senior goalie Sean Sconone made all the difference with seven saves in the net. The Minutemen put up four more goals to finish the Great Danes off, including two more from Procyk, joining Philpott with another hat trick.

“We’re happy to have come out with a win,” said Cannella. “We knew it would be a tough game, and it certainly was. Our ability to win faceoffs and make saves, as well as score in the second half was probably the difference in the game.”

UMass is set to hit the road again to play NJIT on Saturday, March 9 at 12 p.m. at Ranger Stadium.