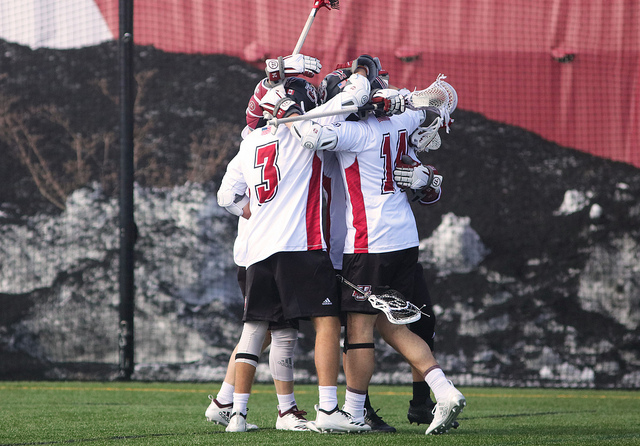 The Massachusetts men’s lacrosse team beat NJIT 19-7 on Saturday to capture its first pair of consecutive wins on the season. The win came on the heels of a 14-8 drubbing of Albany by UMass (3-3).

After a slow first quarter, the Minutemen tore off four straight goals to surge to a 6-1 lead thanks to scores from Kevin Cutinella, Kevin Tobin, Devin Spencer, and Chris Connolly. UMass struck the back of the cage three more times in the quarter to claim a 9-3 edge going into halftime.

For the second straight game, UMass was not held back by its third quarter as it shut out the Highlanders (1-6) while adding six more goals. Jeff Trainor and Procyk each added 2 goals, Ben Spencer had one, and Devin Spencer had one as well during the period.

With the cushion UMass established during its frenzied second and third quarter runs, it seemed as if more Minutemen became empowered with the confidence and aggression to look for their shot and get in on the scoring.

“I think we were good in the second quarter and then early in the third that created that cushion,” said Cannella. “And then when we subbed some of the younger guys, they continued to play hard and…a couple guys scored that hadn’t scored in their careers yet, so it was a great opportunity for them and we’re glad they took advantage of it.”

After limited offensive contributions in the first few games of the season, midfielders Kevin Tobin and Kevin Cutinella have come to life in the past two games. Each attempted three shots on Saturday. Tobin scored twice and Cutinella scored once.

Up by 12 goals by the fourth and final period, the Minutemen opted to their reserves, who made the most of their playing time. Jack Geiger, Alex Shuster, Matt Baugher, and Tim Hoynes all cashed in to score their first college career goals. Less than five minutes into the fourth quarter, Cameron Carpenter subbed in at goalie for Sean Sconone. Then, with 3:15 to go in the game, Hampton Brannon checked in for Carpenter, the third different goalie to see minutes for UMass.

“We just want them to go out there and play hard, play relaxed, do what they do in practice every day,” said Cannella, discussing the late-game substitutions.

Sophomore Tyler Green saw extended reps at FOGO, winning 10 of his 14 face-offs. Tom Meyers handled the other 16, winning a dominant 13 of them. It was the first time Green saw action since the Ohio State game, in which he won 7-11 face-offs.

“Tyler’s been doing well at practice, Tommy’s been a workhorse for us,” said Cannella. “So any chance I have to be able to do that, I’m gonna do it, just to save some legs for Tommy…he’s gonna take a lot of face-offs this year, it’s still early in the season and we don’t want to burn him out.”

One downside to the Minutemen’s performance was that a high number of their turnovers were unforced. NJIT only caused 2 of UMass’ 13 turnovers.

Still, UMass commanded the shots on goal department, putting 22 more shots on goal than did the Highlanders. UMass also controlled the ground ball game, securing 49 to NJIT’s 21. Cannella saw his team’s ground ball dominance as a result of the face-off game.

“Between Tommy and Tyler, both those guys—Tyler had 7 ground balls and Tommy had 12,” said Cannella, “so you’re looking at 19 ground balls just off the face-offs, so that’s probably the biggest contributor to [the team’s ground ball dominance.]”

The Minutemen are slated to play UMass Lowell on Tuesday to kick off a four-game home stand.

Game is scheduled for a 3 p.m. start.