Top power plays set to battle it out in Manchester, NH 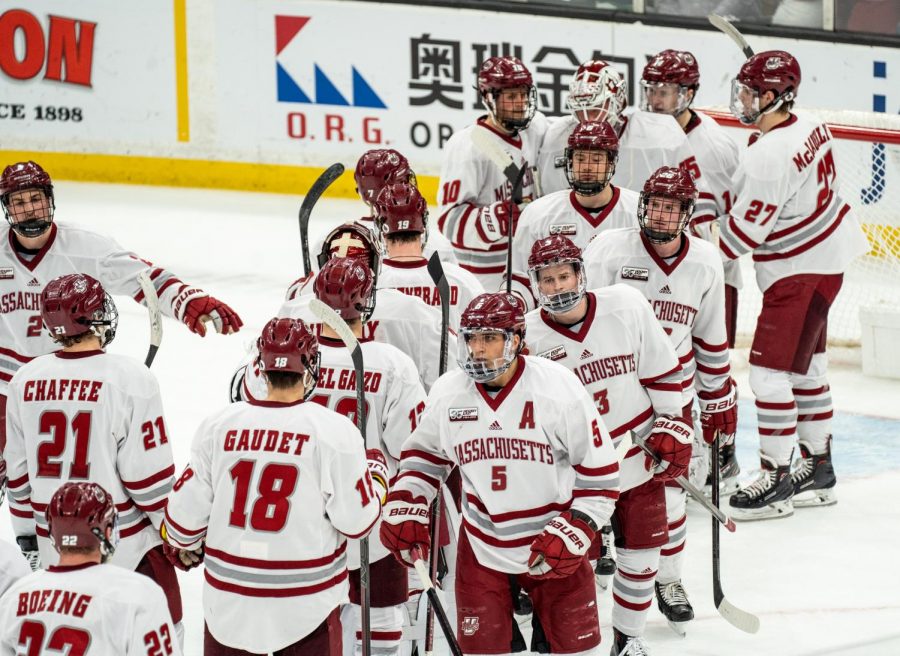 After suffering a stunning defeat to Boston College in the Hockey East semifinals last Friday, the Massachusetts hockey team turns the page and shifts its focus to the NCAA Tournament.

As a result of its record-setting regular season, No. 4 (28-9-0, 18-7-0 HEA) UMass makes its first trip to the national stage since 2007, marking its second tournament appearance in history.

On Sunday, the Minutemen earned the No. 1 seed in the Northeast Region and the No. 4 overall ranking among the nation’s top-sixteen teams. On Friday, they will open NCAA play against No. 13 Harvard in the Northeast Regional semifinals. The other semifinal matchup features No. 7 Clarkson and No. 12 Notre Dame. The winner of each semifinal will play Saturday night for a shot to advance to the Frozen Four.

But following its uncharacteristic showing under the bright lights at TD Garden, UMass can’t afford another sluggish start. For the remainder of the postseason, it’s ‘win or go home.’

“It’s the same way they’ve reacted all year after a loss,” coach Greg Carvel said of how the Minutemen have dealt with falling short of the Hockey East title. “They expect us to come in and give them the reasons why and where we can change and be better. A lot of kids admitted they were out there with big eyes. So, we’re hoping that we’ve learned [from it] and that we’ve got that behind us.”

The four-seeded Crimson (19-10-3, 13-7-2 ECAC) enter their fourth NCAA Tournament in the last five seasons coming off a conference semifinal stumble of their own, in which they fell to the Golden Knights (26-10-2, 13-7-2 ECAC), following a two-game sweep of Dartmouth in the ECAC quarterfinals.

As for what Harvard brings to the table, “Speed, skill and a high-end player in Adam Fox who can be a game-changer,” Carvel said. “They play fast and skilled and their back-end is very similar to ours. They’ve got a top-four similar to our top-four, maybe even better. We haven’t played many teams this year where their back-end can match ours, but I think this is a case where it’s a draw or theirs is a little better. They’re a good hockey team, they always are, so they’ll be a very good opponent.”

With a team-high 48 points and 10 goals on the season, Fox, a Hobey Baker Memorial Award Finalist and 2016 draft pick of the Calgary Flames, will be at the center of Harvard’s hopeful upset of top-seeded UMass. Lined up on the opposite blue line of fellow Hobey Finalist and Minuteman star, Cale Makar, the matchup will feature two of the most dominant players college hockey has seen all season.

“He’s on the ice all the time,” Carvel said of Fox. “I think he might have a point or two more than Cale, but we’ve watched a number of their games here in the last couple of days and he’s just really, really effective and if you don’t neutralize him, he’s going to be a big factor in the game.”

The Crimson hold a 6-1-1 advantage in the all-time series against UMass. The last, and only, time the Minutemen came out victorious was in 1999. The most recent matchup between the teams was in 2012.

Friday’s showdown in the semifinals will be unlike any of the meetings that came before it, however, as the ninth matchup between the teams features the top-two power plays in the nation.

Harvard holds the highest conversion rate on the man-advantage, at 28.8 percent, while UMass sits just behind in second-place, scoring 28.7 percent of the time with the extra skater. On the other side of special teams, UMass is just as successful, killing penalties at 87.1 percent. The PK isn’t as friendly to the Crimson, however. Out of their 101 penalties committed, they’ve killed just 77.2 percent.

“Two really good power plays,” Carvel said after practice on Tuesday. “Our PK has been good this year too, so I’m sure it will be a factor. As a coach, you go into games hoping it’s not – you’re hoping that you’re really good 5-on-5 and that’s what wins you the game, but some games it’s a big factor.

“Last year, it seemed most games it was a factor was when we lost,” he added. “This year, it seems to have been a factor when we won, so we’ll need the power play to be effective and the PK too.”

Puck drop is set for 3 p.m. at SNHU Arena in Manchester, NH.