Plan in response to education and demographic issues 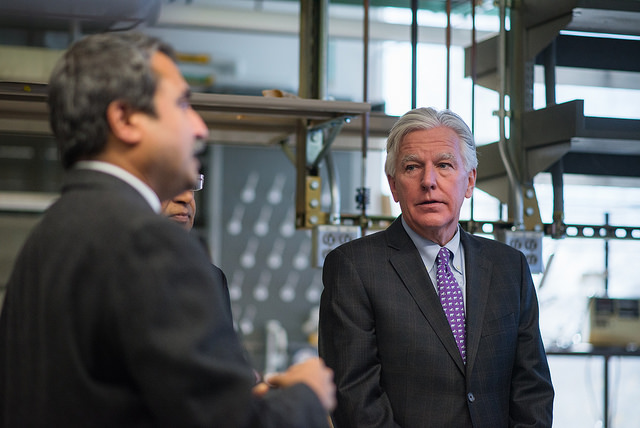 In the wake of changing demographics, the University of Massachusetts System plans to create an online college for adult learners.

During his annual State of the University address on March 4, UMass System President Marty Meehan unveiled the University’s intentions for an online college designed to help alleviate a variety of issues in Massachusetts.

“Last fall, we presented to the Board of Trustees a model that will allow us to rapidly scale this platform through strategic partnerships while implementing best practices in digital education for adult learners,” Meehan said. “By offering degree completion programs, rapid response to workforce demand and customized workplace credentials for employers, we will significantly enhance our contribution to the workforce development in Massachusetts.”

Development of the college is currently in its early stages. During an interview with the Boston Herald’s Joe Battenfeld, Meehan said he plans to meet with leaders and faculty of the individual UMass campuses to discuss the college. Though marketing analysis will be conducted to come up with a name, Meehan said he expects the name to be similar to “UMass Plus” or “UMass Global.”

To fund the program, the University expects to take from its reserves and pay the money back with interest, Meehan told Battenfeld.

“This is a venture that wouldn’t have any state money,” Meehan said.

Meehan also noted education issues in the state, citing that around half of Massachusetts residents 25 and older have a four-year degree, with over 20 percent of the Commonwealth’s population having some form of college credit and no degree.

“We need to think of innovative ways that we can get through what is [going to] be, I think, serious disruption in higher education,” he said.

The University faces a number of competitors in the online college market, including Southern New Hampshire University, Purdue Global and Penn State World Campus. SNHU currently has an estimated 15,000 Massachusetts residents enrolled, Meehan said during his speech, and that a University analysis found that around 50 percent of Massachusetts online adult learners said they would rather enroll in a similar UMass program.

But Meehan doesn’t just intend to target nearby learners. “It’s predicted that over the next several years, four to five national players with strong regional footholds will be established,” he said to Battenfeld. “We intend to be one of them.”

UMass currently has an online presence through UMassOnline, where students can take courses virtually and earn a degree through one of the UMass campuses.

The program was first created in 2001 under UMass President William Bulger. A release on the program described it as a “gateway to the distance learning opportunities offered by the University’s five campuses at Amherst, Boston, Dartmouth, Lowell and Worcester.”

When introducing Meehan during his state of the University address, Chairman of the UMass Board of Trustees Robert Manning noted his support for the plan.

Manning said a UMass online program will allow adult learners “to take that liability, that anchor, that is holding them down and convert it into an asset, and do it in the cloud, online.”