Minutewomen connected on 53 percent from three 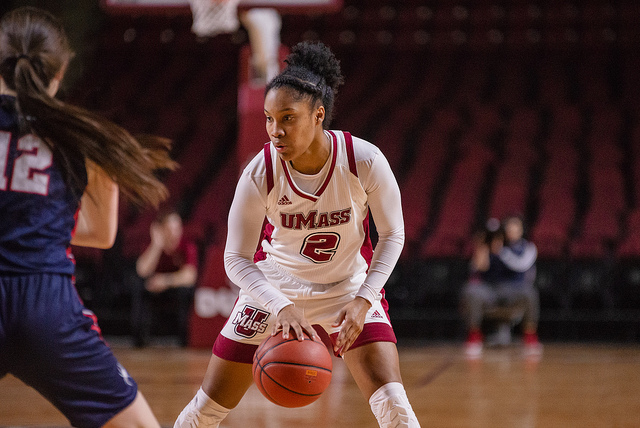 It was a hard fought battle for the Massachusetts women’s basketball team in its 57-53 win over Rhode Island.

The Minutewomen (15-15, 7-9 Atlantic 10) were impressive in their resilience with every one of Rhode Island’s runs. The Rams (8-20, 3-13 Atlantic 10) were persistent all game, refusing to fold when the Minutewomen would push their lead to double digits, something they seemed to do during the last matchup between these two teams earlier this month.

“I thought it was a tale of two halves,” said UMass coach Tory Verdi. “We got wide open shots and were able to knock them down, so I was really proud of our effort there. In the second half, we extended the lead and then they went on a run until it was kind of back and forth for the rest of the game. I’m really proud of our players. We faced adversity down the stretch, but we were strong enough to stop them when we needed it.”

The Minutewomen got off to a hot start in the first quarter, racking up 18 points. The team made the most of their rotations on defense as well, holding the Rams to just 8 points and forcing them to take tough shots. This trend would fade a bit in the second quarter, as UMass struggled to keep possession of the ball, forcing bad turnovers and allowing URI to capitalize on them at the other end. Ultimately, they would hold out and keep a 10-point lead entering the half with a score of 32-22.

“We were just knocking down shots,” said Verdi about what the team has done to start well the past couple of games. “We’re taking the same shots as before, except now we’re making them. I thought our players did a great job.

“Vashnie Perry was fantastic for us. Genesis Rivera came in and gave us a real spark offensively. I thought Bre Hampton-Bey was great at driving in and making plays for us.”

The second half was where things would turned on for UMass. The Minutewomen started off the third quarter with multiple chances to put the Rams away for good, but failed to capitalize on those chances each time. They would halt every Rhode Island revival with a timely three-pointer or a tiny run to swing the momentum, but never fully pulled away. The third quarter would end with UMass up 47-37.

The momentum would swing heavily in favor of the Rams in the fourth quarter. A hot stretch from URI guard Emery Colome would be the catalyst to a stretch that saw Rhode Island break down the UMass lead and turn it into a one-possession game late in the game.

The Minutewomen had themselves a very efficient game offensively. The team shot 43.5 percent from the field and an outstanding 53.5 percent from three on 15 attempts. The offense was flowing and when the team wasn’t wasting possessions with careless turnovers and offensive fouls, they were actually playing like a team that could go toe-to-toe with anyone in the A-10. The Minutewomen are second in the conference in three-point percentage with 32 percent and showed that when they are hitting from outside, they are very hard to beat.

“Hitting shots from outside is great for us,” said Verdi about the team’s shooting from outside the arc. “It forces defenses to have to play up on us, which creates lanes for us to put the ball on the floor and to attack. We’ve got to continue to break the defense down with our ball movement and make our shots count.”