Walker: Minutemen define ‘playoff style hockey’ and how to achieve it

How does a team that has been clutch all season carry that kind of momentum into the postseason? 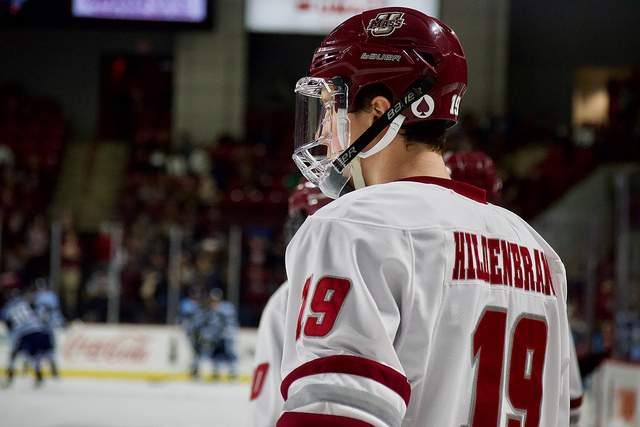 One final, regular-season matchup stands between the Massachusetts hockey team and the playoffs.

The No. 2-ranked Minutemen (26-7-0, 18-5-0 Hockey East Association) don’t necessarily need the win against Connecticut (11-20-2, 6-15-2 HEA) this Friday night, having clinched first-place and home ice for the Hockey East Quarterfinals a handful of games ago.

But, it is the last opportunity to make any necessary adjustments before the most important part of the season.

“I think you’ve seen us become a better defensive team,” coach Greg Carvel said after practice Tuesday. “We start games better; we’re scoring the first goal again consistently like we did in the first half of the year.

“I think the guys are in the right mindset, I think we’re all comfortable that we’ve re-found the edge to our game that got us to a good level in the beginning of the year,” he added. “And just everything seems to be trending in the right way.”

‘Playoff style hockey’ is a term Carvel has mentioned the last handful of games, hoping the team would elevate to that level of play as the regular season rounded out. He believes the Minutemen’s 6-0 showing against Maine this past weekend was exactly what constitutes ‘playoff style hockey.’

Collecting the first two shutouts within the last four matchups of the season shows the team is still achieving feats that it struggled with earlier. Carvel mentioned how on several occasions this season, the team has carried shutouts into the third, only to let it slip away in the final frame.

Now, the Minutemen are persevering through all 60 minutes.

“[Playoff style hockey is] playing very physical, good, defensive-minded hockey and be patient, waiting for the offense to come,” Carvel said. “It’s the beginning too, starting games the right way. Discipline. I think our discipline has been much better on the ice.

“You can just tell the kids are at that point where whatever you tell them to do they’ll absolutely do it to the best of their ability.”

It’s difficult to imagine this team being any more competitive than it already has been this season. Can you go up from scoring with 2.3 seconds left in regulation to steal a win, or posting three unanswered goals in the third period to secure a come-from-behind victory?

In order to go far in the Hockey East playoffs and the NCAA tournament, the Minutemen are going to have to continue finding ways to win against all odds. It will take their smartest brand of hockey, and a level of composure that is usually only seen in veteran contenders.

There is no real playoff experience within the UMass roster, but that isn’t what Carvel plans on leaning on as the competition gets tougher. It’s his team’s attitude and outlook that will anchor their performance in the postseason.

“The thing about our team is that we don’t live off of emotional energy,” Carvel said. “So, whatever the circumstance, whatever the team, you’re consistent and that’s what we have to rely on because we don’t have playoff experience in Boston, in the NCAA’s and levels that we hope to get to.

“But we have a very consistent standard and form of standard that will hopefully serve us well.”

Just because the Minutemen don’t play off of emotion, doesn’t mean the teams they’ll face won’t. The No. 1 and No. 2 rankings that UMass has earned will be blinding to whoever they face in the postseason, because who doesn’t want to knock off the top team?

This will be the program’s first appearance in the Hockey East Tournament as the No. 1 seed and its second appearance in the NCAA tournament since 2007. It may be unchartered waters for the program, but the team has a pretty good understanding of what it means to play playoff style hockey.