UMass feels confident in its ability to play like a No. 1 seed 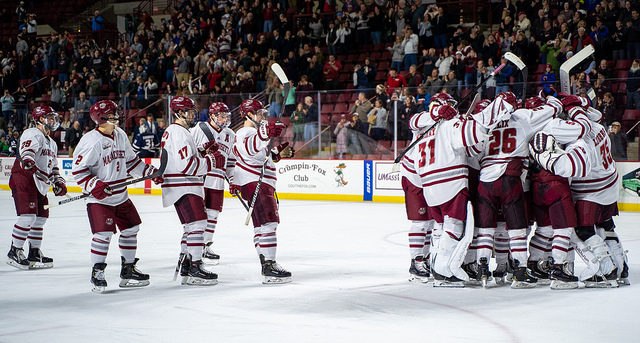 The last time the Massachusetts hockey team played inside TD Garden was back on March 16, 2007, facing New Hampshire in double overtime. It was the first 20-win season for the Minutemen in four years and they were the 12th seed up against the third-ranked Wildcats.

Jonathan Quick was in net, Don “Toot” Cahoon was behind the bench and it was the very first season that UMass earned an at-large bid into the NCAA tournament. Bobby Butler, a UNH freshman, scored 90 seconds into the second OT to knock the Minutemen out and advance to the Hockey East Championship to play Boston College.

Boston College went on to win that 2007 title. And four of the next five titles after that.

Roles may be reversed but the Minutemen’s gameplan will always remain the same.

“Our mindset won’t change,” head coach Greg Carvel said after practice Tuesday. “We’ve focused on the game in front of us. We’ve had the mindset all year that it’s inexcusable to lose any game.”

The Eagles are coming off four consecutives contests against Providence after ending their regular season in Rhode Island with a 3-1 loss, before drawing the Friars for the quarterfinal round. BC dropped Game 1 after forcing OT late in the third, only for Providence to steal it 5-4 early into the extra minutes.

Games 2 and 3 were also one-goal games, but with BC managing to come out on top 4-3 Saturday night before securing its advancement Sunday evening 2-1.

The way the Hockey East Tournament bracket fell could not have worked more in the Minutemen’s favor. UMass Lowell, who still stands as the only team to defeat UMass twice this season, was knocked off by Boston University.

And some of the Minutemen’s toughest competition this season came from Providence, who managed to get upset by the Eagles. Not having to face either of those teams to get to the championship is a big break for UMass.

Carvel looks at the No. 1 seed as an expectation for the team to play like they’re supposed to be there. That is probably the major difference between the Minutemen’s run in the playoffs last season compared to this one.

The team as a whole believes that they are supposed to be here.

“We’re supposed to have a good chance of winning this thing,” Carvel said. “So, if we finished lower and upset somebody to get there, maybe you’d have the ‘we’re happy to be here, we’ll go in there and play with house money and see what we can do.’”

“But we’re the house, we’re supposed to go in there and win some games.”

Boston College sports 12 NHL draft picks on its roster, which Carvel noted will bring tremendous skill and agility. But just like with each talented squad that UMass has faced this season, defense is the main priority.

It’s been an uncharacteristic season for the Eagles, but that might play into their advantage as they come into the matchup with one upset under their belts already. It’ll be imperative for UMass to block out the lights from the big stage and play its brand of hockey that has been effective all season.

Win or lose, playing in the TD Garden atmosphere will be a positive tune-up for the Minutemen.

“I haven’t heard a staff member or player even talk remotely about the national tournament,” Carvel said. “We did great things in the regular season and we’ve had a good start here in the playoffs.”

“We have two games to win a championship and that’s quite an opportunity,” he added. “We’ve talked all year to make sure we don’t regret anything and make the most of these opportunities. So, I’m excited, very excited.”