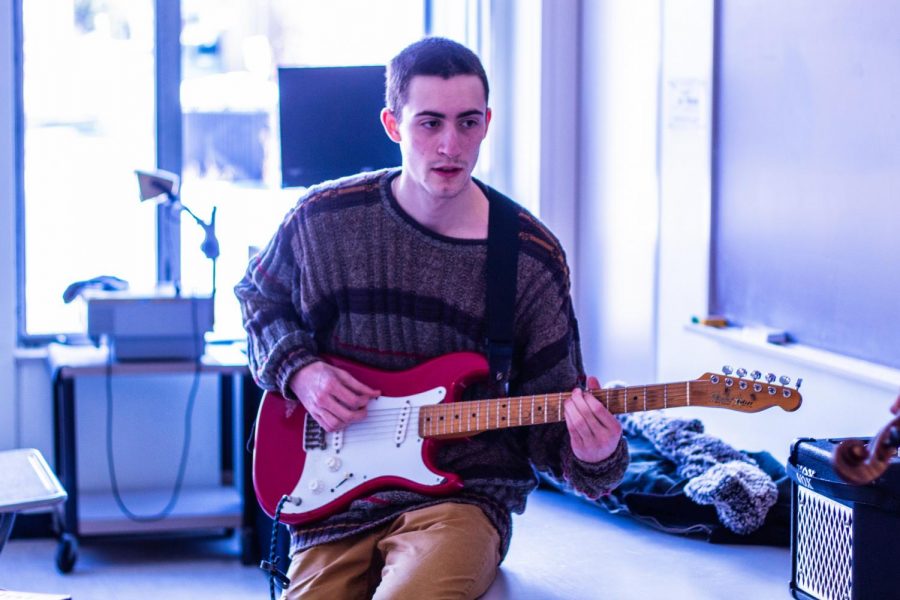 On Saturday afternoon, Isenberg School of Management’s first floor echoed a symphony of electronic dance music, acoustic guitars and a violin, among other instruments, in the midst of WMUA’s first-ever Music Makeathon.

The two-day event, culminating in a Sunday night showcase, was open to students at the University of Massachusetts and the rest of the five colleges. Over the course of the weekend, over 50 students participated in the Makeathon.

Judge Russell, the events director at WMUA, explained that the event was inspired by popular “hackathons” held at universities, in which computer programmers and other software developers work intensely over a short period of time to develop a digital project. As a radio station, Russell said, WMUA is a “place for music,” although DJs don’t always get a chance to create their own.

“There are tons of talented people on campus,” Russell said, adding that at the final showcase, he thought it was important that there was “no one headlining.”

“Performing music for an audience… it feels like what you’ve made is real,” Russell continued. “People can make music without record labels, but sometimes it feels like that’s not true, even when you know it is.”

As a musician, Russell also felt the event would be a good excuse for students busy with other work or activities to “sit down and make something.”

Being that it was the first time the Makeathon was held, Russell held some concerns that nobody would come, but said he was very happy with those who did attend.

After checking in with Russell and other event volunteers, students were able to borrow equipment brought in by WMUA or the volunteers themselves. He joked that, unlike hackathons, the Makeathon lacked widespread sponsorship, but he doesn’t necessarily think that should change.

“There [at hackathons] you see people working really hard to create something… at the end, the work can be taken advantage of when a company just comes in… music isn’t like that.”

Andrew Smith, a freshman who plays acoustic guitar, said he found out about the event from a posted flyer near one of his classes. He said he was happy to meet other musicians at the event and brought some friends to collaborate with. Despite majoring in the sciences, he appreciated the opportunity to explore his “artistic side.”

“I taught myself how to play from YouTube videos, so it was cool to talk to people who know more about playing as a group, and things like that,” Smith said.

Smith added that he was able to talk to other students about artists he liked, including Mac Miller. “I traded numbers with a few of the people, so we could talk more.”

Will Anderson, another freshman playing with Smith, brought in his guitar and a computer to add other synthetic instruments to his recordings.

Anderson said that he would attend the event again if it was held next spring, and he would like to see it become a bigger event in the future.

Looking to the future, Russell said that he would like to see the event expand and offer more equipment and possibly workshops for students. While the event wasn’t organized with the music department at the University, Russell would consider working with them another year.

However, he said it was important for the event to not be entirely involved with the music department, since he feels the programs aren’t geared toward the music which “music people… who aren’t music majors… are making.”

Anderson agreed with Russell, adding that most musicians he knew taught themselves outside of traditional settings.

“I did band in high school, but I’ve really developed my style on my own,” Anderson said. “Most of what I do is based on who I listen to, not something from a classroom.”