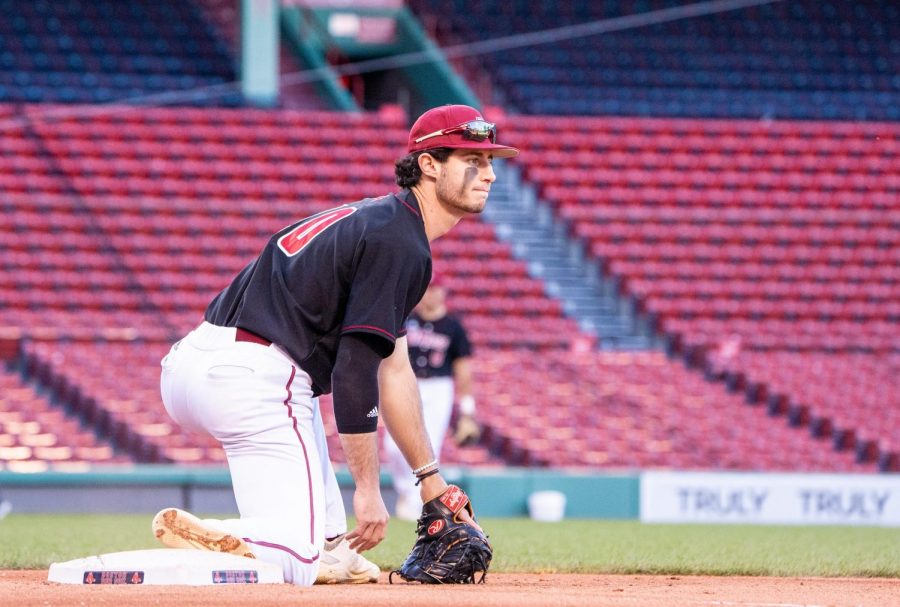 Five batters before Logan Greene walked off the Massachusetts baseball team with a Baseball Beanpot Championship, Anthony Videtto doubled down the left field line to lead off the ninth inning. That hit set the table for Connor Smith to single home Videtto, tying the game at 9-9.

Videtto’s day got off to a tough start as the first baseman struck out with a runner on first base to end the first inning. On top of being set down to end the first, Videtto also stranded the bases loaded in the fourth inning, watching strike three.

But after struggling at the plate early, the UMass four-hole hitter became a tough out for Crimson pitchers.

In the Minutemen’s first Beanpot Championship since 2012, the sophomore went 3-5 with a walk and two RBIs.

“He had a great day, under the spotlight,” head coach Matt Reynolds said.

Beyond traditional box score stats, Videtto used his speed to impact the game.

In the third inning, after Nolan Kessinger doubled to cut the Harvard lead to 3-2, Videtto beat out a soft ground ball to keep the pressure on the Crimson, setting the Minutemen up to knot the game at three apiece.

“I feel like I’m one of the faster guys on the team,” Videtto said. “Anything I can do, steal bases. Its just awesome being out here. I’m just so happy, I can’t even think.”

After singling home two runs to cut the Harvard lead to 9-8, Videtto stole second base, putting the possible game-tying run in scoring position.

“He had a great day,” Reynolds said of Videtto. “He did a great job off the lefty, stealing second base.”

Videtto went toe-to-toe with his first base-counterpart on the Crimson side as Harvard first baseman Patrick McColl went 2-4 with two RBIs of his own.

McColl has been dominant in 2019. The senior came into the game batting .443 with 33 RBIs and nine home runs. The first baseman would add his tenth in the first inning Wednesday.

The game is a continuation of what has been a hot season so far for Videtto, who came into Wednesday’s contest hitting .303 with 14 RBIs and nine extra base hits.

Videtto’s three hits matched a season-high, marking the fifth time in 2019 that the first baseman has hit that mark in a game. The sophomore also has recorded at least one hit in six of the last seven contests.

“He’s been a heck of a player for us all year,” Reynolds said. “He’s a solid guy. That’s why the guy whose name I write in the four hole every game- well his name begins with a ‘V’.”

Videtto has a chance to keep his hot streak going on Friday as the Minutemen travel to Maine to start a four-game weekend series with the Black Bears. Friday’s game is set to begin at 4 p.m.