No arrests occurred on Marathon Monday 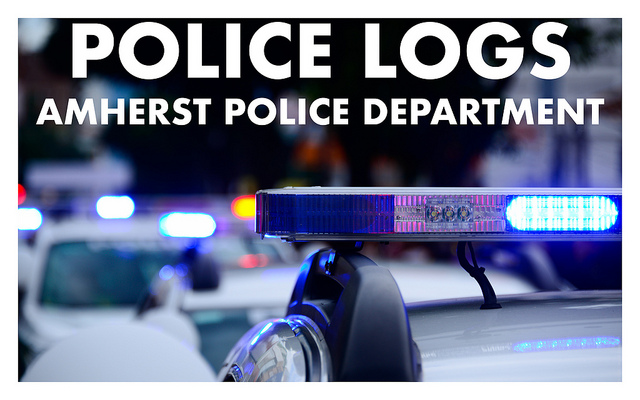 The following police logs are from the Amherst Police Department from Monday, April 15, 2019.

9:48 a.m.: A breaking and entering into a motor vehicle was reported at 143 Northampton Road. An incident report was filed with the Amherst Police Department.

10:46 a.m.: An officer requested dispatch information on a past assault.

5:47 p.m.: A red 2001 Dodge Ram was reported operating all over the street by 307 Pelham Road. The vehicle was seen swerving and crossing the yellow lines. The vehicle was located at the registered owner’s residence. The operator checked out okay and said he was avoiding pot holes in the area.

8:46 p.m.: A gray 2000 Lexus SE was seen operating all over the road by 389 N. Pleasant St. The operator turned off the rotary toward the University of Massachusetts campus and was no longer in front of the reporting party. The UMass Police Department was notified; an area check for the vehicle was negative.

5:07 p.m.: A reporting party stated he was house sitting at 170 E. Pleasant St., Apt. 125, and was locked out of the residence. He attempted to gain access by climbing through a basement window and then got stuck. An involved party confirmed the person was house sitting and was instructed to enter through a window. The person was successfully removed from the window by the Amherst Fire Department. An officer spoke with the resident and confirmed he was not breaking and entering.

5:10 p.m.: A woman came into the police station to report odd things happening at the house next door. She lives at 76 Stony Hill Lane and the neighbor is at 78 Stony Hill Lane. She indicated she had security cameras installed in an attempt to catch her neighbor throwing pine cones over the fence that hit her roof. She said she will be adjusting the cameras to catch her neighbor. She has further heard loud banging at random hours of the night, which has caused her to lose sleep. The woman has been encouraged to seek a harassment prevention order; however, she weighed out the options and it was not clear if that was worth it to her.

5:28 p.m.: A reporting party at 497 E. Pleasant St., Apt. 117 stated that he saw a few college-aged individuals messing with a fire hydrant. He was unsure if they damaged it in any way, but they appeared to be doing something to the valve. An officer spoke with an involved party who was attempting to use the hydrant for leverage to tighten a bolt on his spare tire. The person was advised not to do this; the hydrant appeared to be unaffected.

11:21 p.m.: A reporting party was concerned about potential drug activity taking place at Sunset Grill and Pizza, 150 Fearing St. A delivery driver reported she was approached by two males in the parking lot of the location who tried to block her car. They also rubbed their noses, “asked if she wanted some” and then mouthed some words. The driver did not think that they meant her harm, but she was uncomfortable and believed they were trying to sell her drugs. The manager of the restaurant reported customers informing her of similar instances earlier that day. Another employee recognized the two individuals and said she went to high school with them. They were believed to have a dark gray sedan; no plates and no video footage. However, there is footage of the two men entering the establishment. No drugs were seen, but increased patrols are requested in the area.

10:33 p.m.: An officer assisted the Amherst College Police Department at Craig’s Place, 434 N. Pleasant St. The officer made contact with a listed party regarding a larceny on the Amherst College campus. The information was forwarded to the school’s police department.