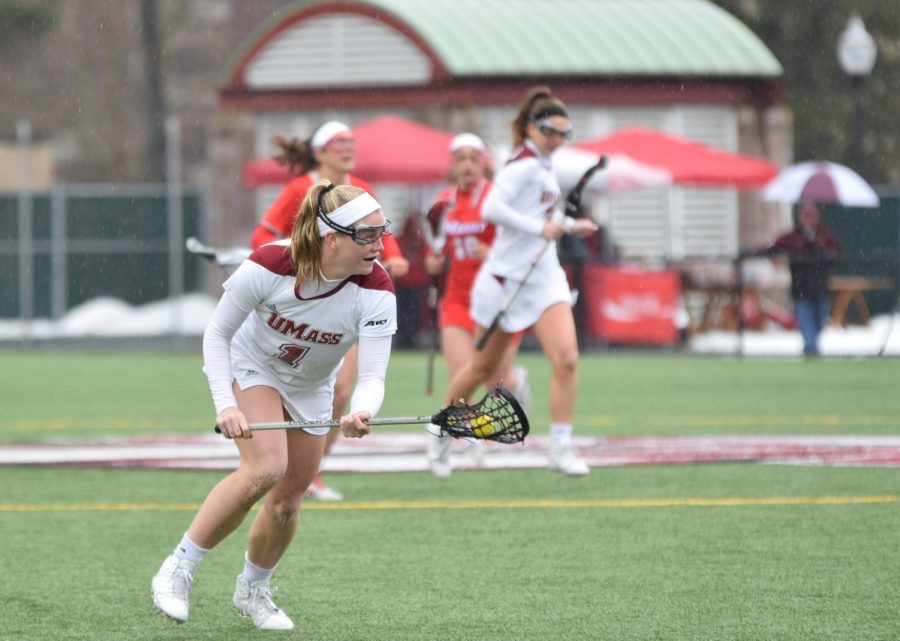 As the Massachusetts women’s lacrosse team went into overtime against Richmond on Sunday, the shadow of the 2018 Atlantic 10 championship game loomed over Garber Field. In that game, UMass (13-3, 8-0 A-10) battled back to tie the game in regulation, only to lose 35 seconds into overtime in a stunning upset.

Sunday, with the score tied 12-12 and UMass enjoying a player-advantage to start the period, the story was different. Junior Caitlyn Petro won the opening draw, and one minute and 12 seconds later, the Minutewomen found the back of the net.

“The opening draw of overtime is something that I’ve been thinking about for 12 months,” Petro said, smiling and shaking with emotion after the game. “Last year our season ended in an overtime loss to Richmond in the championship game, and what happened was I lost the draw. They went down, they scored in like 10 seconds. I’ve been thinking about that for 12 months now, and all that pressure on my shoulders, I was able to just look at my teammates and take a deep breath, and just did what I had to do, you know?”

So far this season, redshirt senior Kiley Anderson has handled most of the draws for UMass, but from the opening draw it was Petro on Sunday, leaving Anderson exclusively on the attack.

“They’re a real strong defensive team,” Petro said. “Very good goalie, good defense, they ride really hard. So what we needed was Kiley more focused on the attacking end, and I think I’ve been doing pretty well. I’ve had a little bit of a hot streak on draws the past couple games. So might as well just capitalize on that.”

The switch worked; after losing the first two, Petro won 11 straight draws to close out the first half; the streak ultimately ended at 15.

“That was definitely a turning point for us, I think, because we were down a little bit at the beginning of the game, and the energy was a little bit shifted in their favor,” Petro said. “But having those draw controls – I think my job is mostly just making sure the energy’s there. If you get a good draw and get the ball down to the attack, they’ll take care of the rest.”

All told, UMass outdrew Richmond 19-8 to propel an offense that was running hot and cold, capable of quick runs or long dry spells. But despite 18 turnovers, the Minutewomen held the ball longer than Richmond and ultimately were able to find just enough holes in a strong Spiders’ defense.

“On offense, we were kind of up and down,” McMahon said. “But in the end, when it counted, we showed discipline and poise and we executed exactly what we wanted to do in that man-up situation, so they ran it to a T.”

Petro was less dominant in the second half, as Richmond came away with six of 13 draws. But in the end, when it counted, she was able to corral the ball and UMass finished off the victory.

“She came in and crushed it,” junior Kaitlyn Cerasi said. “That’s all in her mind, winning the draw, and she really did so well. Especially after she won it, she was able to possess it and hand it off. She killed it.”

For Petro and the Minutewomen, the win was a chance to banish some ghosts. UMass is now undefeated in the A-10 with one game left, against George Washington next Saturday. The Minutewomen are guaranteed the top seed in the A-10 tournament, where they will look to return to the championship glory they enjoyed for nine straight years before last spring’s heartbreak.

“I think this is what our team was looking forward to all season, was just this game,” Petro said. “So it’s like a little bit a sigh of relief, but there’s a lot of work to do. We saw the score of this game. It was great to get the win, but now all we’re focused on is getting better, improving in those areas we lost on last year and what we did this year.”