Chaffee, Hildenbrand fortunate for another opportunity to play on a national stage 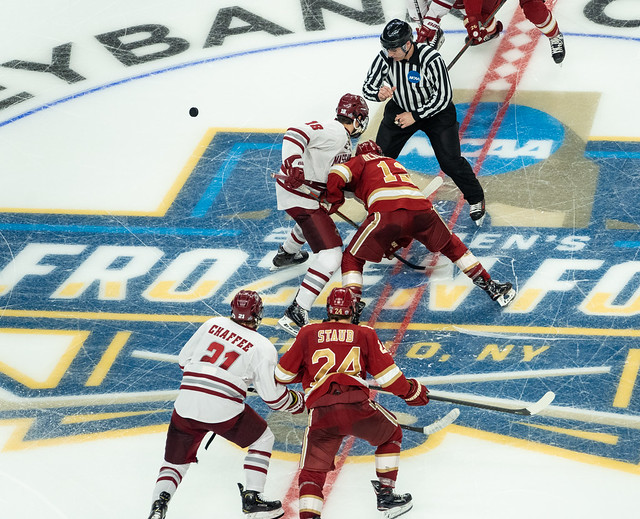 UMass at the Frozen Four at the Key Bank Arena on Thursday, Apr. 11, 2019. Photo by Jon Asgeirsson.

BUFFALO, N.Y. — If there was one positive thing to come out of the Massachusetts hockey team losing its captain and leading scorer to major penalties in the semifinal matchup of the NCAA Tournament, it’s that there will be another game.

Another chance for Mitchell Chaffee and Niko Hildenbrand to compete with their teammates on a national stage.

“When we came off the ice, they were high-fiving and hugging everybody,” coach Greg Carvel said of the two. “You could tell by looking in their eyes those kids had been sitting in terror. None of these kids want to be a reason why a season like this comes to an end.”

Chaffee and Hildenbrand’s absence in UMass’ 4-3 overtime win over Denver was a huge obstacle to overcome. It could’ve been a massive setback, considering just over six minutes in the Minutemen (31-9) had already lost their captain and were down one goal.

But UMass once again proved its resiliency and had fourth-line players like Anthony Del Gaizo stepping up and skating on the first line. Carvel considered the win to be a “real culture moment” for the team, managing to hang on to the win despite blowing a two-goal lead and playing without two core skaters.

Denver skated on the power play for over 13 minutes Thursday night, and the Minutemen were without two of their top four penalty killers. Hildenbrand particularly eats up a ton of minutes on the PK, while Chaffee simply rounds up the team’s average in size.

“Yeah, those guys are great teammates, great leaders,” Jacob Pritchard told the media Friday before practice. “They’re a huge part of our team. Losing them, we know how much they care and how much those hours were probably just terrible for them.

“At the same time I think they trusted us that we’d go out there and get the win.”

With both players forced to watch from the press box as their team battled for a chance to compete for a national championship, one can imagine what was brewing inside of them.

It could potentially serve the Minutemen well, with the two coming back with the freshest set of legs and an insatiable desire to make up for lost time when taking on Minnesota-Duluth (28-11-2) Saturday night.

“Those two guys, the upside is I think we’ll receive the absolute best they can give the team tomorrow night,” Carvel said.