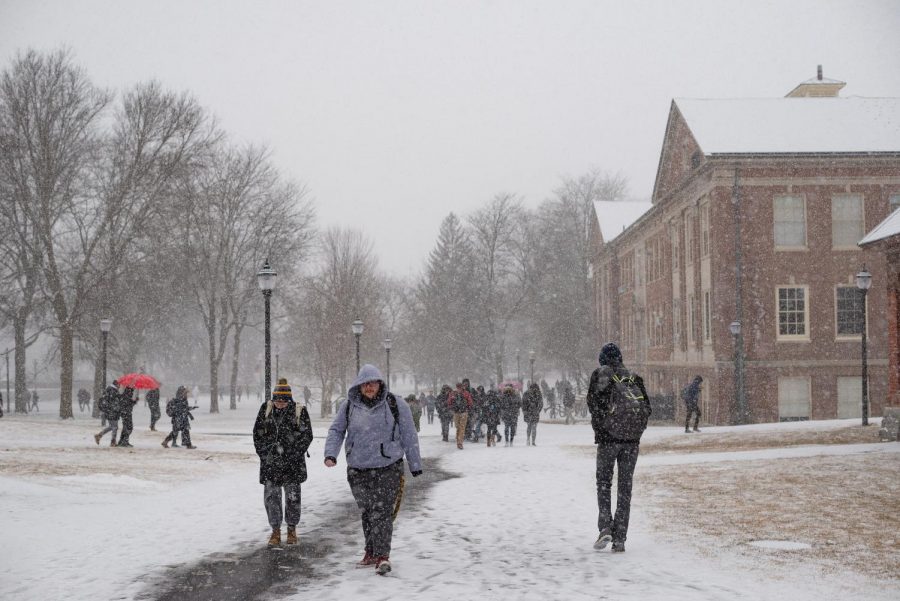 The things people love about New England – seasons, cold weather, skiing – won’t be the same by 2060.

Warming global temperatures will change the way we think about New England, and in a couple decades, the Massachusetts climate will be much more similar to North Carolina, according to  Dr. Richard Palmer, the head of the Department of Civil and Environmental Engineering at the University of Massachusetts and the university director of the Northeast Climate Adaptation Science Center.

The primary cause of climate change is greenhouse gases emitted into the atmosphere from human activity. Many people like Palmer are working to understand and mitigate climate change.

“There’s always a lot of natural variability, but what we’re seeing is this continuous increase in global temperature over time,” Palmer said.

The CASC transforms the terabytes of data provided by intergovernmental agencies into an easier and more user-friendly format, so managers of natural resources, cultural resources, state and tribal agencies can understand what temperatures and precipitation will look like in the future.

The center receives data from studies done on global models. From there, researchers take the output of those models and run them through up to 16 other algorithms.

The CASC also does work locally.

One thing the center is studying is the production of maple syrup, which Palmer said is likely to decrease as New England warms up.

The center also expects to see changes along waterfront shoreline. As intense storms move more sediment and natural nutrients into bays and estuaries, this can lead to algal blooms, a hazard for both aquatic life and humans. They also look at the change in forests and how trees in northern forests will be challenged by change in temperature.

Since Palmer’s primary area of research is water resources, he’s interested in putting current climate projections into context regarding how the natural cycle of water and hydrology of the region will change.

“The things we can expect are lower snowpack in the mountains and therefore a general movement to more rain and less snow,” he said.

Locally, changes in the Connecticut River are expected. Even though there’s an anticipated increase in annual rainfall and runoff in the river, Palmer also anticipates lower summer flows.

“It could even perhaps rain more in the summer but if it’s even two or three degrees warmer, there’s a lot more evapotranspiration particularly in the summer,” he explained.

Evapotranspiration is the process of how water moves from the ground to the atmosphere by evaporation from the soil and from the evaporation of water in plant life.

If snow melting happens earlier in the season and peak flows occur in January and February, rather than in April like they do now, there will be less spring water runoff, Palmer said.

“What that implies is that there’s a longer dry period,” he said. “It would mean lower flows in the Connecticut river, more chance of drought events in the region.”

The CASC works with the Executive Office of Energy and Environmental Affairs and Massachusetts Department of Transportation. MassDOT is interested in the increase in extreme flows because flooding can affect transportation networks, according to Palmer.

Since high flow periods can take out roads, bridges or culverts, CASC is working with MassDOT to estimate how much river extremes are likely to change in the future.

“We’re seeing that peak flows may increase by 20 or 25 percent by midcentury and later,” Palmer said.

In 2016, transportation emissions were the highest source of greenhouse gases in the state according to the Massachusetts Department of Environmental Protection.

Kearns said air quality is important to study because it can lead to high asthma rates and other respiratory diseases.

Despite that, he’s hopeful because collaborative initiatives like the Transportation and Climate Initiative sets priorities to curb transit emissions while investing revenue back into public transportation.

Kearns sees a solution to transportation emissions in investment in public transportation, such as projects like the east-west rail, or north-south commuter rail link.

Although a less significant source of emissions in this state, power plants contribute to greenhouse gases and those affected are some of the most vulnerable populations.

“It’s not a coincidence that a lot of power plants, pipelines are being put in these poorer neighborhoods and communities,” Kearns said.

This does not mean these communities can’t organize to make change happen. In 2014, MassLive reported that Action for a Healthy Holyoke had lobbied for years to have the Mount Tom Power Plant shut down and were finally successful.

“People who are historically underrepresented and disadvantaged are not being advocated for and they are more vulnerable,” said Rachel Berggren, a masters student at UMass studying sustainability sciences with a concentration on sustainable food systems. “Whether it’s people living in housing complexes next to factories that are polluting, they are already most impacted. People with more money are more able to deal with disaster whereas people without money and without social advantages are going to be left behind if their houses get destroyed.”

Climate in the valley

Berggren noted climate change has already started to impact the Pioneer Valley. Last summer, farmers in the area had crops destroyed by rot from the increase in rainfall, causing crop production to be lower than normal.

“Crops that are growing on the ground are more impacted by floods because of rot and decay,” she said. These crops are left in the field to turn over into soil for next year.

“It’s cut into their costs and ability to sell produce,” she said.

Berggren worked at Warner Farm in Sunderland last year and said they were affected. Despite longer growing seasons, the ability to reliably grow isn’t so certain.

“In this world of climate change, do we know if we’ll be able to feed ourselves?” Berggren said.

Berggren is currently doing a practicum on farm food loss. She said she is finding out how much food is left on farms and how that can be reduced by creating a secondary market. Ultimately, her goal is to set up a system that would bring food that would otherwise be wasted into dining halls.

“The fact that data and the numbers are telling us this needs to have already been dealt with 30 years ago,” she said.

“If individual citizens don’t care about it, how do we expect our policy makers and politicians to care about it?”

Climate change will also have impacts on global and local economies due to necessary disaster response programs, Berggren said.

“If we don’t do preventative work to stop climate change we’re gonna have to spend a lot of money cleaning up the impact like dealing with floods, dealing with infrastructure that is collapsing and crumbling because of weather catastrophes,” she said. “That’s where I see it hitting us economically. Having to rebuild things.”

Berggren talked about the misconception that food will compost in the landfill with other trash.

“Food waste is one of the biggest waste products in our landfills and they contribute to methane gas production,” she said.

Composting is part of a multistep system that can be helpful, she said. The process can have positive impacts, like anaerobic digesters which produce energy.

“In the same way we got here, we can get somewhere else through intentional behavior change,” Berggren said, noting social restructuring needs to occur for people to think differently about climate change. “We need to see ourselves as part of the environment and we need all of our actions to be in relationship to that environment.”

Palmer is hopeful things can change — and he is already seeing it.

“I think it’s a serious enough problem. The perceptions have changed dramatically if you look at polls,” he said.

According to polls from the Yale Program on Climate Change Communication, in 2018, 73 percent of polled Americans thought climate change was happening — an increase from 62 percent in 2013.

Around the world, the younger generation is taking charge of their future. On March 15, teenagers around the world, including in Amherst, walked out of school as a protest against climate change inaction.

“It’s great to see them out marching, trying to make change within and outside of the system,” Palmer said.

But many argue that though the problem climate change poses is daunting and the consequences are likely to be catastrophic —it’s already here.

“You don’t have to do everything. You can’t solve this problem by yourself,” Berggren said. “If all of us could just come together and do one little thing each day to start thinking more about this, it doesn’t have to be a radical change. It can just be one choice at a time.”

Judith Gibson-Okunieff can be reached at [email protected] and followed on Twitter @jgibsonokunieff.