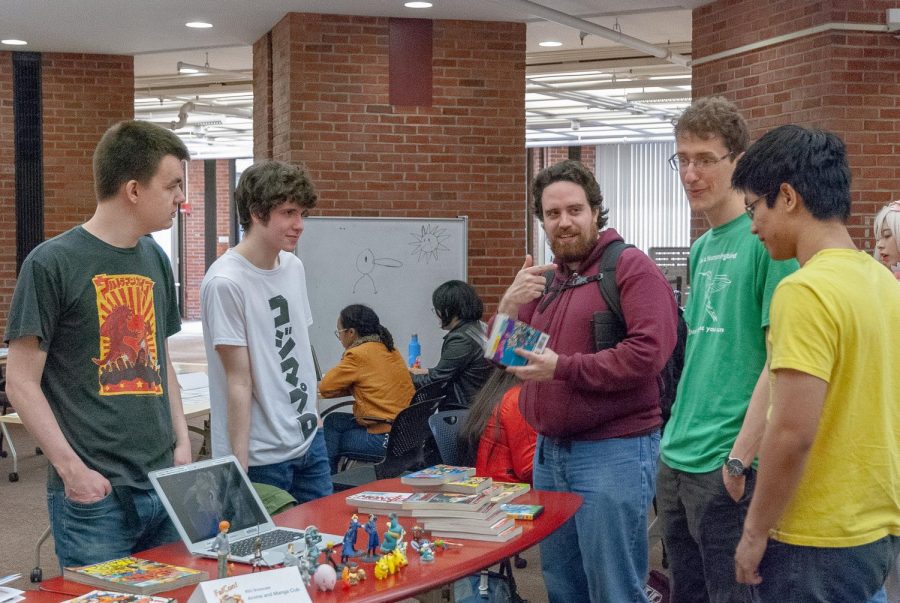 On Saturday, March 30, the W.E.B. DuBois Library at the University of Massachusetts held the first FalCon, a comic, anime and science fiction convention.

Named in honor of a family of falcons living on top of the 26-story library, FalCon attracted dozens of students to meet with Registered Student Organizations, look through a showcase of artwork, play games and hear talks from local artists and authors.

Lauren Weiss, UMass Libraries marketing and outreach assistant, started organizing the event around a year ago, inspired by her own experience attending conventions.

“I really wanted to offer this as a fun networking event,” Weiss explained, saying that bringing different student groups together for niche interests was a great way to “mix it up a little.”

In the library’s lower level, dozens of tables were set up for various RSOs, including the Animation Club, Anime and Manga Club, UMass Cosplay and Costume Club and Super Smash Brothers Club.

Sean Emerson, a UMass senior and president of the Anime and Manga Club, felt the event was about “all the nerdy, fun things you can do on campus.”

“For people drifting around on campus, they can learn about the clubs, [the clubs] can get new members,” Emerson explained. At his table, Emerson promoted the club’s upcoming eight-hour film marathon on April 6, featuring films such as “Summer Wars” and “No Game, No Life: Zero.”

Nearby, Xiaoyue Wong, the vice president of the UMass Cosplay and Costume Club, staffed her table dressed as anime character Sakura Miku. Now in the club’s second year, Wong and the other members are preparing to attend Anime Boston, the largest anime convention in the northeast. During weekly meetings, they help each other prepare their outfits for the event.

In attending FalCon, Wong, a junior animal science major, hoped to introduce cosplay culture to the rest of campus and correct “a lot of misunderstanding.”

“The culture of cosplay, you can actually be whoever you want to be in a costume and wig,” Wong explained. “It’s a very accepting culture.”

While some RSOs had a clear connection to the event exhibitions and activities, others sought to bring attention to their lesser known organizations.

Alyssa Pool, a sophomore member of the Knitting, Crocheting and Needlework Club, explained how her group meets every Thursday from 6 to 8 p.m. for people interested in the “fiber arts.”

“We technically have a lot of members, but it’s probably 10 to 20 people, a rotating group that come,” Pool said.

In the UMass Theatre Guild, chairperson Cassandra Clark brought attention to the final production of the season, “The Secret in the Wings,” which is set to open next weekend.

“It’s a super quirky show,” the theater and English senior said, explaining how the play showed a “dark side of fairytales.”

In planning the event, Weiss wanted to keep students at the center of activities, allowing submissions for an “Artist’s Alley.” The five students exhibiting their work ranged from freshman to graduate students, and came from majors in painting, education, studio art, animation and art history.

David Osgood, displayed his art on one table while introducing attendees to the Animation Club at another. As club president, Osgood spoke on how formative being a member has been, especially in introducing him to his best friends and advancing career skills.

FalCon gave different disciplines the “opportunity to overlap,” Osgood said, adding that animation was a “source of joy and creativity every week.”

“It’s important for students to discover these clubs that might match their interest… you need to be able to find your people, be creative with them.”

Olivia Marchione, a freshman, exhibited her painted and drawn works, but also attended to see “what other people are doing.”

During the first talk of the day, author James Cambias read a chapter from his third book, “Arkady’s World” and answered questions from members of the audience.

Prior, Cambias tabled alongside student organizations to talk to students one-on-one about his career and interest in science fiction, as well as offer advice.

“I heard about this event at the very last minute,” Cambias said, explaining that his wife was an adjunct professor on the UMass campus. A Louisiana native, Cambias now works from Deerfield, Mass.

Interested in science fiction from an early age, he learned that Isaac Asimov published his first short story at 15 years old and Cambias was inspired to write himself.

“I was 14 at the time and wanted to beat him [Asimov] into print,” Cambias laughed. While he didn’t reach that goal, publishing his first short story in 2000, Cambias eventually published his first book in 2014, titled “A Darkling Sea.”

“We’re in a very interesting time right now,” Cambias said about the science fiction genre, noting the increased number of independent publishers and new markets. “The whole secret is you have to write something.”

Gary Hallgren, a local illustrator and comic artist from Granby, Mass., spoke at 1 p.m. about his career spanning from “alternative hippie comic books” to the nation’s most prestigious publications. Currently, Hallgren ghosts the popular comic strip “Hagar the Horrible.”

In the Digital Media Lab, Ian Walls of web services and emerging technologies at UMass Libraries ran an activity for students to pose in front of a green screen that could become a variety of science fiction themed backgrounds.

Walls became involved in the planning committee to show that the library isn’t just “that big tall building in the middle of campus.”

“People don’t always know we have things other than books,” Walls said. A seven-year employee of UMass, he added that FalCon would be the last event he helped with before leaving for the private sector.

“I really appreciate the energy and passion that students have for the work they do,” Walls said. “It’s a bright note, an upswing, to see [FalCon] come to fruition.”

“I hope I can come back next year as a community member,” he said.