Event featured a walkout and a student protest on one of the school’s quads. 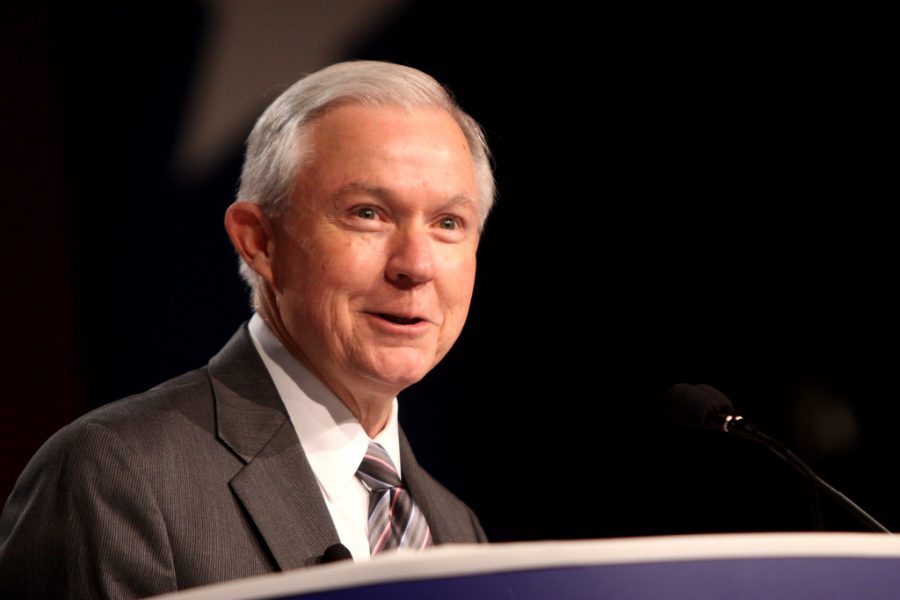 By James Woglom and Meghan Sorensen

Sessions’ event garnered significant criticism from Amherst students and community members. A protest event, titled “The Community Speaks! No to Sessions; Yes to Valley Activism!” was led by the Amherst Direct Action Coordinating Committee concurrently with his speaking engagement on the campus quad.

While the College Republicans promoted Sessions’ talk as a discussion of the reasons behind what moved voters to support Donald Trump, Sessions rarely mentioned his former boss by name. However, he did defend his decision to recuse himself from matters relating to the Russia investigation, an action of his which Trump strongly criticized.

“I had to face the ethical choice right off the bat, having been asked at my Senate confirmation, ‘Will you recuse yourself?’” Sessions said.

Given that he held a position within the Trump campaign, he felt it would not be appropriate to investigate a campaign which he was a part of. After conferring with an ethics official in the Department of Justice, “I read the regulation that he cited and…felt comfortable and correct that the ethics officer was right and I should recuse myself, and I did so,” Sessions said.

Sessions also delivered strong praise for former Special Counsel Robert Mueller, who has been vigorously attacked by other figures on the right, including Trump.

“Special Counsel Bob Mueller is a very established prosecutor,” Sessions said. “He knew his integrity was on the line when he accepted the job. He has now issued a report, [and] some people may say it was excessive, but I say it was a complete and thorough investigation. Let’s accept the results, and get along with the business of America.”

In his opening remarks, Sessions advised conservative students on how to stay true to themselves on a liberal college campus. Sessions was momentarily interrupted by a peaceful demonstration of the exact ideological divide present in college campuses which he mentioned.

“Hang in there. Don’t accede premises you disagree with or reject. Think through your ideas, in your efforts be respectful of others, strive to be accurate and honest in all you say and do… truth usually wins out,” Sessions told the crowd before a mass of audience members silently raised fists, turned their backs, and held up an LGBT flag into the air before turning and exiting the chapel in protest.

“I have to say that was a little better than last week at the University of Minnesota,” he said.

“I thought the protest was done well,” said Jake Grossman, a sophomore political science major at Amherst College. “It didn’t disrupt his speech but they still got to make their point.”

While a student at Huntingdon College, Sessions and his wife Mary Sessions started the school’s first young Republicans club. In Alabama at the time, there were so few statewide Republicans that, “the joke was they would caucus at the phone booth. We [students] thought that we were right, and we advocated for them, just as many liberals, conservatives and libertarians do today,” he said.

Sessions noted a lack of conservative faculty at Amherst College and emphasized the importance of experiencing intellectual diversity.

“On this campus, if you’re not on the liberal end of the spectrum that’s considered to be an unacceptable political ideology,” Grossman said. “You’re really ostracized on campus and can’t really publicly state your beliefs on a lot of issues.”

Sessions spoke at length about the importance of free speech and protection of the First Amendment, saying that, “truth is not a solely-owned concept.”

A significant portion of Sessions’ speech focused on the role free speech plays on college campuses.

“A university is supposed to be a place where we train virtuous citizens,” he said.

Pointing to incidences of free speech restrictions that have occurred at Boise State, Clemson and Virginia Tech, he noted, “freedom of expression would not exist if only [allowed to be] exercised in a space which a benevolent government has given.”

He continued by emphasizing the importance of challenging one other and sparking discussions on prominent issues rather than meeting differences of opinions with violence and disruption.

“Unfounded arguments should be responded to with more persuasive arguments, not force,” Sessions said. “The attack on free speech strikes on what it means to be an American.”

Will Meyer, co-editor of The Shoestring, an independent web magazine covering culture and politics in western Massachusetts, felt that making an event like this about “free speech” missed the larger story.

“The right loves to hide behind the claim that they are promoting free speech as an esteemed democratic principle. But these are the same forces that will stop at nothing to quiet and suppress speech and actions that go against their ideological agenda,” Meyer said, surrounded by protesting students and members of the Amherst community.

“That’s part of the reason I attend [Amherst College Republicans events] even though I’m not a Republican,” Montesinos said. “I think even if ideas are unpopular you have to listen to them… The right to hear what they have to say from the opposing side is really important.”

Meanwhile, the protest on one of Amherst College’s quads gathered many who disagreed with Sessions and his appearance.

“We organized this event to celebrate all who are building movements of resistance against individuals like Jeff Sessions and the wider, violent structure of white supremacy his actions uphold,” the Amherst Direct Action Coordinating Committee said in a statement.

Huey Hewitt, a senior history and Black studies major at Amherst College, said his organization’s protest was designed to both respond to Sessions’ presence on campus and celebrate the organizing work happening in the Pioneer Valley.

“[We decided] it would be more tactical to do a walkout, where we show that we’re not willing to listen to Jeff Sessions but we’re not going to shut him down for speaking, and then have this alternative event to show that our voices are louder than his,” Hewitt said.

The opportunity to celebrate and bring together community organizing in the Valley, even without the impetus of Jeff Sessions’ presence on campus, “already is a beautiful event,” Hewitt said. “I would say this has been the biggest and the most successful event [of ours] at the College in many years.”