Danielle Ellis and Kendra Allen key in both wins 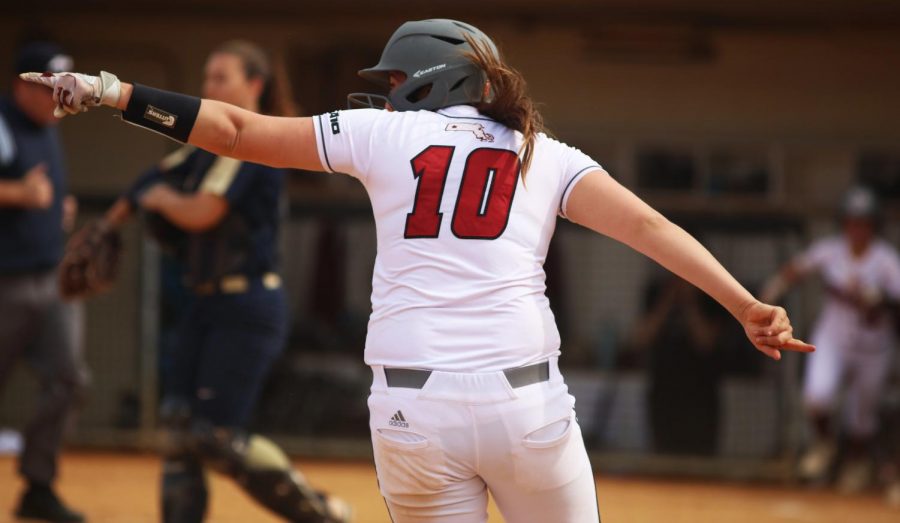 Freshmen Danielle Ellis and Kendra Allen led the Massachusetts softball team to a sweep in its doubleheader with George Washington on Saturday, as the Minutewomen earned a nail-biting victory in game one and a dominant victory in game two.

The story of the game was the play of freshmen Danielle Ellis and Kendra Allen. They gave massive contributions with their bats that led the Minutewomen (19-15, 7-1 Atlantic 10) to a 4-3 extra-inning win in the first game and a 14-1 victory by mercy rule in the fifth inning of the second game.

“When a hitter, it sounds so cliché, but when they’re in the zone, they’re in a zone,” UMass coach Kristi Stefanoni said. “Today Dani had a really good day, she was seeing the ball well. She had a great plan to do that, she followed through, and I think that’s what helped her plate discipline today. She acted like a veteran today for sure.”

Danielle Ellis, who committed to George Washington in the early stages of her recruiting before decommitting and coming to UMass, was starting her first conference game. Ellis went 5-for-5 at the plate and walked twice over the two games.

In the first game, she was the only starter able to generate any sort of offense, going 3-for-3 at the plate and drawing a walk while also scoring on Allen’s home run that tied the game.

In the second game, Ellis continued her hot streak, going 2-for-2 at the plate with two RBIs and a walk. She was not the focal point of the offensive explosion that the Minutewomen had, but she was definitely a contributor.

“I just felt good,” Ellis said. “My mindset just felt good. I feel like I had a good grasp of the plan on all the pitchers. I just went in there and I executed.”

Kendra Allen had herself a day as well. The freshman came into the weekend with just 24 at-bats, but made the most of her pinch-hit opportunity. In the bottom of the sixth inning of game one, with the Minutewomen down 3-1, Allen blasted a shot over the left field wall that tied the game up. In extra innings, she would walk to load up the bases before Madison Gimpl’s game-winning hit.

Allen carried that momentum forward after being inserted into the starting lineup in the second game, where she would go 1-for-2 at the plate with a walk and score a run.

“I was just trying to stay focused and locked in,” Allen said of the home run. “I know I don’t get that many opportunities as a freshman so when I did get the opportunity I was just like ‘stay driven’ and see a strike and just bang it.”

The two freshmen were a part of the two biggest moments of the doubleheader, each being a part of the game-tying home run and also being on base for the game-winning hit.