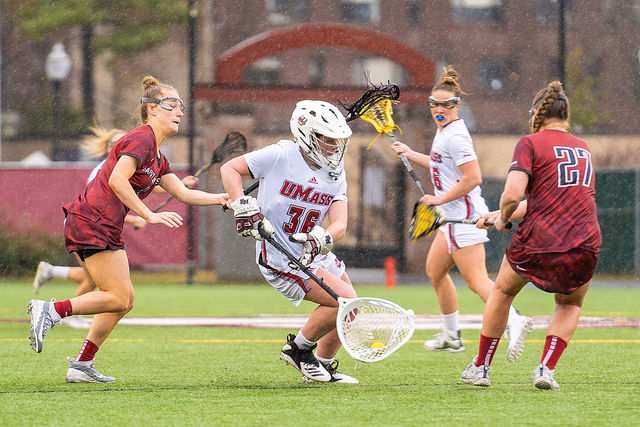 For the Massachusetts women’s lacrosse team, the weekend went about as well as the team could have hoped.

Coming into the weekend, there were three teams tied atop the Atlantic 10—UMass, George Mason and Saint Joseph’s—all undefeated in conference play. The Minutewomen played George Mason and St. Joe’s back-to-back and won them both, ending the weekend in sole possession of first place in the A-10.

The wins were nice, but the striking thing was how they won. In the first half of the season, there were a lot of questions around this UMass team, even as it got out to a 7-3 start.

The 2018 season cast a long shadow: UMass’ jaw-dropping 63-game conference win streak came to an end last April, as the Minutewomen lost the A-10 for the first time in 10 years, and top scorers Holly Turner and Hannah Burnett graduated soon after. Beyond that, the Minutewomen showed cracks early in the 2019 season, particularly in underwhelming losses to Harvard and Dartmouth.

None of that stopped UMass from racking up wins, mostly blowouts against lower-level competition in non-conference play. The Minutewomen relied heavily on a potent offense to stake them to an early lead and kept piling on, preventing their opponents from coming back by keeping up the pressure on the attack.

But when that strategy failed, UMass struggled. Absent top scorer Kiley Anderson against Dartmouth, the Minutewomen gave up a couple early goals and never mustered a comeback. Against Harvard, UMass fell behind in the first half and the offense got stagnant as the Crimson pulled away. The Minutewomen started the year 6-1 when they scored first and 0-2 when they didn’t.

Even in the games they won, the Minutewomen were often sloppy on defense, which was masked by the big leads they built up. While the defense was never truly bad, it was prone to unforced errors and had surrendered 13.5 goals per game heading into this weekend. UMass had yet to prove that it could lean on its defense if it had to.

George Mason is a good team, although not likely to be in the mix for the A-10 championship at the end of the year; the Patriots went just 5-4 in the conference last year and lost in the first round to Saint Joseph’s, and the roster this year isn’t deep enough. Still, they beat defending A-10 champion Richmond last week and were expected to play a close game.

Instead, UMass dismantled them systematically, cruising to a 24-5 win akin to their season-opening victory over Bryant. One of the top teams in the A-10 was dispatched as easily as a sub-.500 team from the Northeast Conference. That was the most impressive win of the season for UMass and the defense, which I questioned before the game, disrupted the Patriots throughout the day.

There was plenty to criticize from the Minutewomen on Sunday. They were sluggish out of the gate, falling behind 5-2 in the first eight minutes as the Hawks found holes in their defense. They got hit with four yellow cards and committed 26 turnovers, although pouring rain may be partially to blame for the latter (for the record, St. Joe’s had 27). Late in the game, clinging to a two-goal lead, they couldn’t get the ball back to put the game away.

Still, this was exactly the sort of game I had been waiting to see from UMass.

The Minutewomen fell behind early, as their offense finally met a defense that could disorient and stifle them. Kiley Anderson was almost a non-factor, and the Hawks were winning draws. There was a fair amount that went wrong, and the Minutewomen handled it beautifully, coming back to tie the game at halftime and eking out a second-half lead.

And while the UMass defense was good against George Mason, it was better against St. Joe’s. For the first time, the Minutewomen leaned on their defense to get them back into the game. UMass shut out the Hawks for the final 22 minutes of the first half and allowed just three goals in the second half. In the final 10 minutes, when St. Joe’s was hammering away and the Minutewomen couldn’t get anything going on the attacking end, the defense held firm to preserve a narrow victory.

It was a great game for UMass, which has now won four straight. Better yet, the improvements seem like they might stick. The defensive turnaround has correlated with the return of goalie Lauren Hiller, who missed the entire non-conference schedule due to injury. Hiller, who said Sunday was her “first fully-back game,” was spectacular this weekend, particularly in the close win over St. Joe’s.

On the other side of the field, the attack has evolved beyond just the Kiley Anderson show. Anderson ran roughshod over UMass’ non-conference schedule, scoring 39 goals in nine games. Since then, she’s been held to four goals in UMass’ four A-10 games, and UMass has four wins.

Anderson has certainly played a role in that, getting extra attention from defenders and pulling down draw controls, but it speaks to the fact that more players are getting involved for the Minutewomen.

Three players – Stephanie Croke, Kaitlyn Cerasi and Cassidy Doster – recorded two goals each against St. Joe’s, while Cerasi, Haley Connaughton and Emma Dotsikas led UMass’ onslaught against George Mason. Against Dartmouth two weeks ago, the Minutewomen mustered just seven goals without Anderson, but now they have the offense in place to win without her.

There are five games left for the Minutewomen to prove they’ve turned a corner. Richmond looms, two weeks away, and St. Joe’s team will be a dangerous opponent if UMass sees them again. But right now, for the first time all year, the Minutewomen look like the class of the A-10.