Hockey mailbag: Gearing up for the Frozen Four 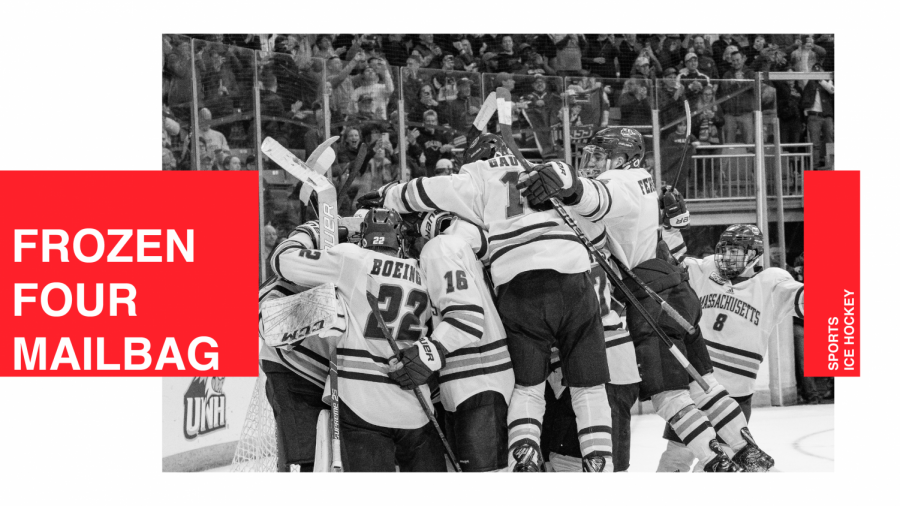 A lot has happened since my last mailbag in late February. The Massachusetts hockey team secured its first ever Hockey East regular season title, beat New Hampshire in the quarterfinals, lost to Boston College in its first trip to the TD Garden since 2007 and then ran the table in the NCAA tournament Northeast Regional to punch its ticket to its first Frozen Four in program history.

UMass is now headed to Buffalo this week and will square off with Denver in the national semifinal Thursday night.

To kickstart the Daily Collegian’s coverage of the Minutemen’s historic endeavor, I’ll answer some questions ahead of UMass’ bout with the Pioneers. Let’s get to it!

Question: @BobJefferson77 asked, “How did the team regroup after the HE semi-final loss and prepare for the Regional?”

Answer: The short answer is just as they have all season. After every loss the Minutemen sustained this season, the next game saw UMass adjust and attack on its way to a bounce-back win. In fact, the Minutemen are the only team in the country not to lose consecutive games all year long.

The longer answer boils down to, in coach Greg Carvel’s words, five distinct points in its game. After UMass’ win over Notre Dame in the regional final, Carvel said he got his team to focus on those five points, that he did not disclose, after the loss to the Eagles.

Carvel did say he wanted his guys to get back to playing aggressive hockey. He felt the Minutemen were too passive in the loss to BC. Being hard on pucks and just playing with confidence were what Carvel wanted to see.

UMass had thrived under that style of play and when it didn’t play like that in Boston, the change was noticeable. He added that the overwhelming atmosphere contributed to the performance and getting that type of experience out of the way helped the Minutemen in spades in Manchester.

It came down to simple changes, because that’s how UMass has operated all season. Its mindset all year hasn’t involved elaborate motivation tactics or overblown hype. Instead, the Minutemen have banked on focusing on themselves and staying even-keeled through the ups and downs.

Q: @ronNcaphill asked, “How does UMass stay focused and not allow the FF distractions (especially the Cale/NHL stuff) to affect it?”

A: This is a bit similar to the previous question, so I’ll touch on the Cale/NHL aspect.

If there’s anyone that can deal with distractions on the UMass hockey team, it’s Cale Makar. As a top draft pick, Makar has had to deal with extra attention since he arrived in Amherst. When he decided to return for a sophomore season, the buzz only increased as the Calgary, Alberta native was expected to be one of the best, if not the best, players in college hockey.

Makar dealt with all of that and put together a Hobey Baker-worthy season while also leading the Minutemen to unprecedented territory.

Not to mention that No. 16 already starred in the biggest amateur hockey tournament in the world last winter in the IIHF World Junior Championships—that were also in Buffalo—makes me think that he’ll be just fine when Thursday’s puck drop rolls around.

Now, whenever UMass’ season ends, it’s likely Makar will join the Colorado Avalanche’s playoff push immediately, and something like that could be hard to ignore. I would still say that won’t be on Makar’s mind until the conclusion of the season, but the prospect of joining the NHL in a matter of days is hard to prepare for.

Q: @ZACHISGOD asked, “What part of Denver’s game should UMass be the most concerned about?”

A: The first thing that comes to mind is goaltending. Like the Minutemen, the Pioneers did not allow a goal in either of the Allentown regional games. Freshman Filip Larson backboned Denver to its two shutouts against Ohio State and AIC.

On the season, Larson posts a 1.87 goals against average and .935 save percentage, which slightly trails UMass goalie Filip Lindberg’s numbers at a 1.41 GAA, .939 save percentage. Safe to say it’ll be a goalie battle on Thursday.

The Pioneers’ defense has to be credited as well in their airtight weekend in Pennsylvania. I didn’t get a chance to see any of their NCAA games, but everything I’ve seen has praised their defensive play. I have to imagine it’s similar to what the Minutemen accomplished in regionals, such as dominating puck possession and keeping their opponents chasing all 60 minutes.

In general, this matchup intrigues me because I think both teams play a similar style of game. Both make it tough on their opponent night in and night out and both are sound in all areas of the game. Denver holds the upper hand in experience, but that hasn’t scared UMass at any point, so I expect an entertaining contest at KeyBank Center.