In a likely last hurrah, Cale Makar’s appreciation for UMass was on full display

Makar’s legacy was solidified in Buffalo 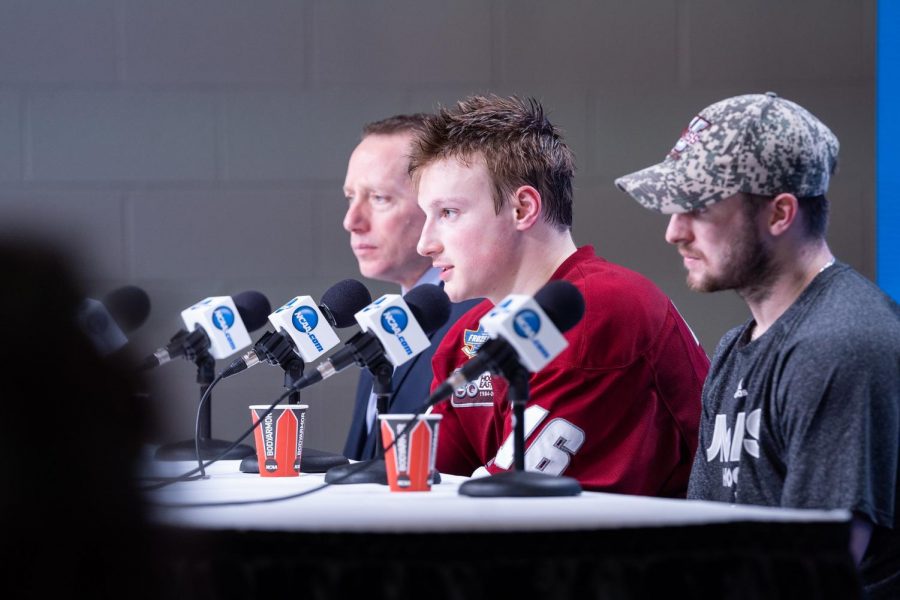 Not because he’s a better hockey player than Johnny Gaudreau or Jack Eichel or Paul Kariya or the host of incredible players who held the trophy before he did — Makar spent the entire season proving he was the type of person deserving of the award, and just happened to have the ability to supplement that.

Makar wasn’t at his best in Saturday night’s loss to Minnesota-Duluth in the national championship game. He struggled to impose his will in the game, he had some defensive lapses that led to big chances, and for maybe the first time in his college career, he was on the wrong end of a big hit at the blue line.

Then he stepped through the black curtains behind the dais in the press room at the KeyBank Center, and those qualities, that character, it all came out.

Makar, who is widely expected to sign with the Colorado Avalanche in the coming days and make his NHL debut as soon as Monday or Wednesday, addressed the media still fully dressed, in a maroon Massachusetts sweater that he wasn’t eager to part with.

“I mean, I just want to keep it on as long as I can,” Makar said. “It’s a jersey that I’m very proud to wear. Our team has brought so much respect, like I said, to this program. Honestly, it’s going to be a couple years that I never forget in my entire life.”

“Yeah, it’s tough right now,” Makar said. “I’m pretty sour, but you look back at the two years that I’ve been at this school, and especially this year, the amount of respect that we’ve created for this emblem of Massachusetts and UMass, it’s just amazing.

“The group of guys we have in that room is just a testament to the character guys we’re going to be bringing in in the future, as well.”

UMass coach Greg Carvel has spoken highly of Makar week after week, and after Saturday’s loss, that didn’t change.

“Very proud of my team, our team, and extremely proud of Cale,” Carvel said. “He came back this year. He didn’t have to do that. I think he’s a kid that he sees the group ahead of himself, he wanted to help take the program to another level, and he did that along the way. He did it with complete class every step of the way. He’s an outstanding young man. I think he’s a better person than he is a hockey player. Very appreciative of what he gave to UMass hockey.

“Hoping he comes back next year,” Carvel said with a smile, “but we’ll see if that happens.”

A lot has been made of Makar’s humility, and not a word of it is exaggeration or innuendo — a single conversation with Makar and it’s immediately clear that it’s all genuine. The humility, the pride, the appreciation for the program; everything he’s said since he arrived at UMass has been real.

“I’m so very honored and humbled to put this jersey on every single game,” Makar said. “Our practice jerseys, as well. I’m so fortunate that I chose this school under such great staff, not just the coaches but support staff, training and everything as well. It’s just a sense of pride now.

“Like I touched on, we brought so much respect to this crest and this program is no longer an embarrassment. Everybody can look at us as a program that’s going to be successful for years.”

Some were surprised that Makar even came back for a second year. He’s an NHL ready defenseman and he has been for sometime, and he could’ve made the jump, cashed in, and started his professional career a year early. But he stayed, and Carvel is as appreciative as anyone.

“When you get a kid like Cale, you feel a lot of responsibility as a coach to develop him and make sure — he could have gone anywhere, could have done anything,” Carvel said. “But he chose to stay loyal to his commitment to UMass. I took it and our staff took it as a huge responsibility. The thing that I love about Cale is that he never makes you feel like he’s doing us a favor by playing for UMass. He’s very grateful for what we did for him, and it’s genuine. You just got a sense of it there. He didn’t look at UMass as a steppingstone that he was going to fly by. He looked at UMass as a very important part of his life. I gave him so much credit because he did everything absolutely right, every last part of it.

“That’s why I’m so happy that he won the Hobey Baker award because he’s absolutely what you want in a Hobey Baker winner. He’s an elite hockey player. But when we think about Cale, personally when I think about Cale, first thing that comes did me mind is how good of a kid he is. He’s unbelievable. I feel very fortunate that I got to coach him. I don’t expect him back. Just very grateful, very grateful.”

Makar’s legacy at UMass was solidified before the Minutemen took the ice on Saturday, and the disappointment of a thorough defeat to Duluth doesn’t change what Makar accomplished in two years in Amherst.

He elevated a program from mediocrity to the national stage, he embodied a culture that helped turn a five-win program into one that was 60 minutes from a national championship. He did everything right, he did everything he could for the program and for the University to which he meant more than any UMass athlete since Marcus Camby.

And he did it all with unerring poise, humility and grace, every step of the way.