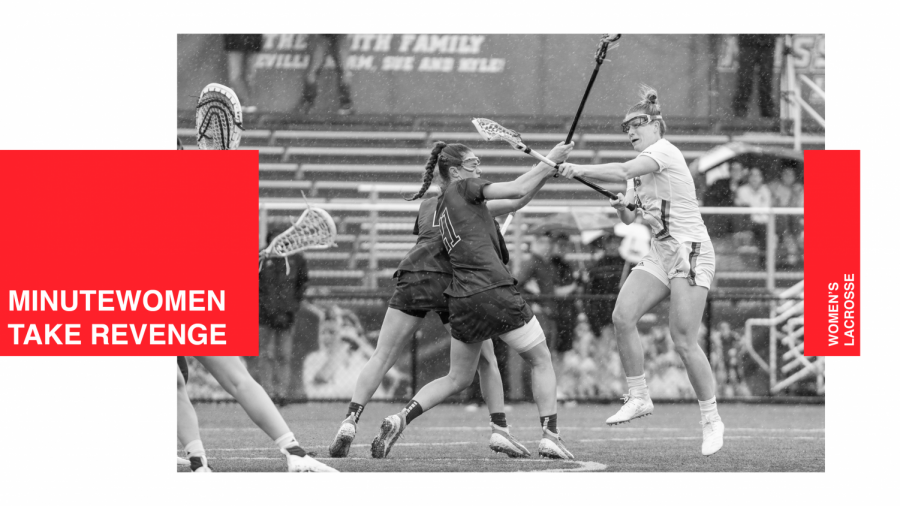 Just over a minute into overtime, Kaitlyn Cerasi took a pass from Stephanie Croke near the right post and rifled a shot into the upper right corner of the net to give UMass (13-3, 8-0 A-10) a measure of revenge against Richmond (13-3, 6-2 A-10), which upset the Minutewomen in overtime in last year’s A-10 championship game.

“We thought about last year, obviously,” Cerasi said. “We lost to them and we just think back to how that felt. Redemption, we’re in this together as a team. It’s a new team, we want to move on from that, but we want to win the A-10s.”

UMass trailed by two heading into halftime but came out firing on all cylinders, stringing together three goals in the first four minutes of the second half to take its first lead of the day. After that, the game went back and forth, as neither team got more than a one-goal lead in the final 26 minutes.

UMass took a 12-11 lead on Cassidy Doster’s shot from the top of the circle with 10 minutes left, but was unable to add a cushion despite several minutes of sustained offense in the final stretch. Richmond senior Katie Sciandra scored her sixth of the game with just over nine minutes left to tie it up again, and both defenses held against furious attacks to force overtime.

“I think for a little bit there in the second half we got a little bit sloppy,” coach Angela McMahon said. “Clears, some unnecessary unforced turnovers, so we’ve got to buckle down on that. That was something we got away from on Friday, but it has given us some trouble in the past.”

Richmond opened up the game strong, scoring first and building a 5-2 lead in the first 20 minutes. Goalkeeper Lauren Hiller got off to a good start despite the score, making five saves in those first 20 minutes; she would finish with a career-high 17, which tied for the second-most in program history.

“Lauren Hiller did a great job in cage, but honestly, I think our whole defense really stepped up,” McMahon said. “Richmond’s so talented, they’ve got so many weapons, we had to find ways of limiting their opportunities and forcing them into tough situations.”

After the Minutewomen stormed back to tie the game at five, including a pair of goals in less than 20 seconds, their momentum dissipated. Richmond’s defense caused a turnover after the third goal and Sciandra picked up her third of the game on the other end, and after a couple more missed opportunities by UMass, Sam Geiersbach found the lower right corner of the net with just three seconds left.

“We were feeling a little flustered going into the halftime,” draw specialist Caitlyn Petro said. “We were getting good shots on net and everything, but our offense just seemed really frustrated, almost. So what we did during halftime was just really tried to focus in on, ‘What is our game? What are our jobs?’ Take a deep breath, do what you’re here to do, and just focus on that.”

In the final seconds of regulation, Geiersbach was hit with a yellow card for a foul at the edge of UMass’ attacking zone. Although the Minutewomen were unable to finish the game off in regulation, they capitalized on the player-advantage 1:12 into overtime.

“We were man-up, so it was really just working it around and making some moves there to see who the open player was going to be,” McMahon said. “Once we found that, we were able to go at it again and execute off of it.”

With the win, UMass moves to 8-0 in the A-10 and a guaranteed top seed in the A-10 tournament with one game to go.