Those in attendance included Chancellor Subbaswamy 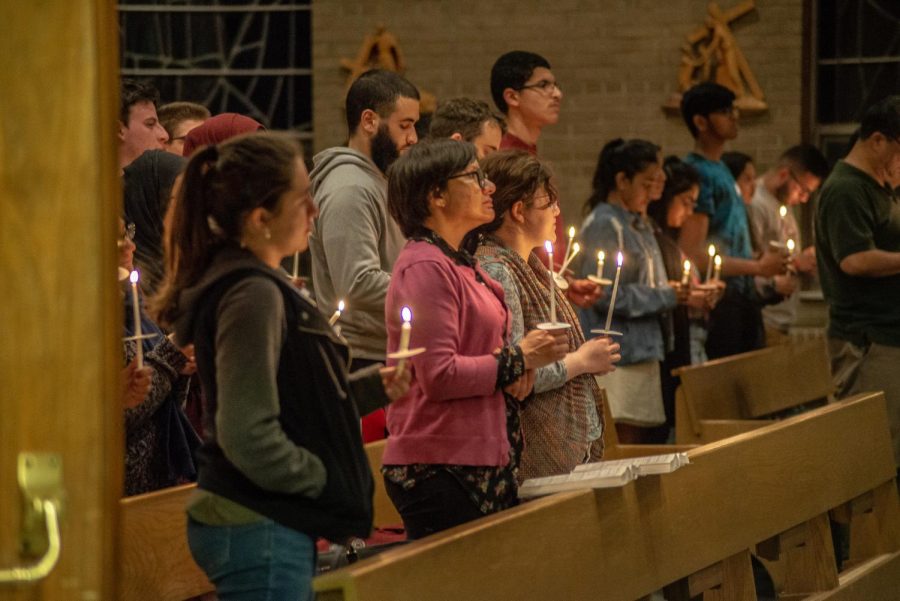 University of Massachusetts Chancellor Kumble Subbaswamy and 80 others gathered in the Newman Center on Thursday evening to host a candlelight vigil honoring those killed and injured in Sri Lanka on Easter Sunday.

Over 250 people were killed and over 500 were injured in attacks on three churches and three hotels.

The vigil opened with music followed by an introduction by church director, Father Gary M. Dailey.

“We are gathered here tonight as Christians and others of various faiths for two reasons: to remember and to pray,” Dailey said. “Remembering the events of Easter Sunday is necessary because it is a snapshot of a much broader evil in regard to Christian persecution throughout the world.

“Nine hundred thousand Christians have been martyred in the last decade. That is one Christian dying every six minutes,” Dailey continued, expanding on how there are more Christian martyrs than in the early days of Christianity.

“The second thing we gather to do tonight is to pray,” the priest continued, explaining the importance of the Easter celebration in the Christian religion. “And that’s what these Christians on Easter Sunday were celebrating. With profound joy, with the singing of the Easter Hallelujah little did they know that admits that joy, they would be called to martyrdom.

“We come together tonight to condemn these acts of terrorism and inhumane acts which are never justifiable in any religion or in any circumstance,” Dailey continued. “People of every religion must have the freedom to worship in their own way without the free of violence and death.” He ended his introduction with a prayer.

Chancellor Kumble Subbaswamy spoke next, thanking Father Dailey for his words and for his work at the church. “When there are innocent people murdered, whether it is a mosque in New Zealand or churches in Sri Lanka, how do you as a human being make sense of this?

“Faith is certainly one part of it and hopefully that faith consoles those who are directly experiencing tragedy, but also that faith steers us all into action,” Subbaswamy continued. “As the head of the University that truly believes in the ideals of inclusion, diversity and believes in the values of respect of human dignity fundamentally, we can easily get despaired and say, ‘what does this all mean,’ or we can spring to action.”

The Chancellor encouraged all to live up to the expectation of respect and dignity to everyone.

Newman Catholic Student Association President Lillian Alvino followed Chancellor Subbaswamy and read a scripture from the Bible. She spoke on passion and love before opening the vigil up to a reading of intentions, followed by a chorus of “Lord hear our prayer” from those attending.

She prayed for world peace, an end to violence and for the those who died, their families and community members. She then carried out the prayer of Our Father.

In the pews was Assaf Elroy, Israel fellow and UMass Hillel employee. The vigil welcomed those of all religions to show respects after the massacre.

Dustin Baglow, member of UMass Cru, a Christian organization, spoke last, beginning with a Bible scripture from the Book of Luke.

In the Roman Catholic religion, the priest lights a candle at the Easter Vigil mass, the Paschal Candle. It is blessed and lit each day of Easter, symbolizing the light of Christ.

“This light was one of the last things the worshipers in Saint Sebastian and Saint Anthony Churches saw before they were brutally executed,” Father Dailey said in his final remarks during the vigil. “I ask Michael and Andrew to come forward to light their candles with the Paschal Candle and to share that light with you.”

Two students lit their own candles and continued down the rows until every candle was lit.

The service ended with three songs. A chorus of Amazing Grace echoed throughout the chapel before the attendees blew out their candles. All were welcomed to refreshments provided by UMass in the lounge outside of the chapel.

Editor’s Note: The original version of this article contained an incorrect death toll and a miscalculation of the number of injured people in Sri Lanka. The spelling of the Newman Catholic Student Association President’s name has also been corrected.

Cassie McGrath can be reached at [email protected] and followed on Twitter @cassiemcgrath_.