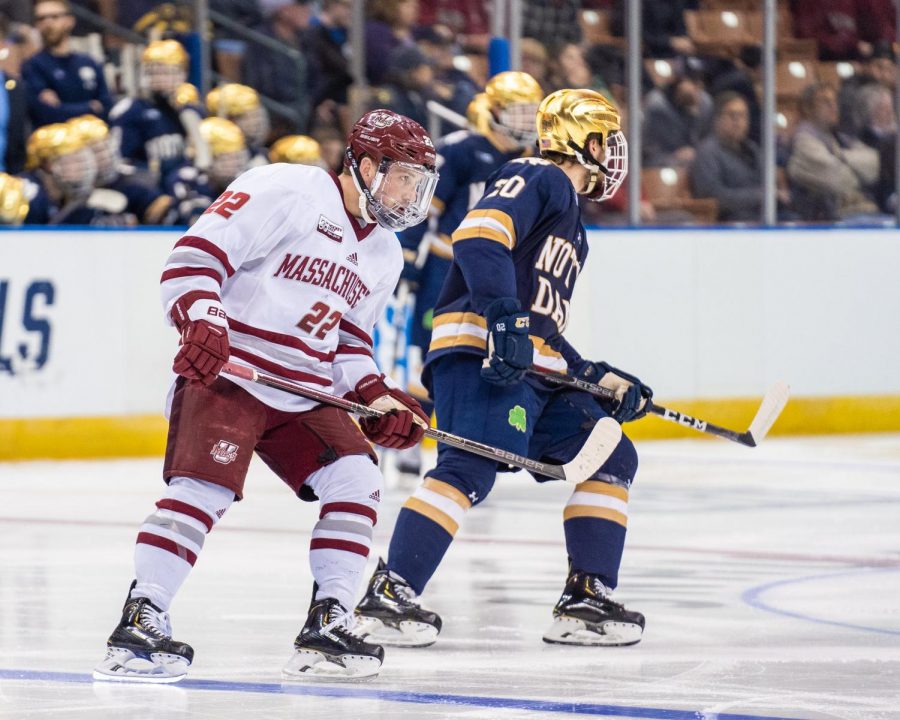 Brett Boeing’s first game in a Massachusetts sweater was a win.

The next 17 he played: all losses.

Fast forward two seasons from his post-Christmas arrival in 2017, Boeing, now a third-line center, is the leading goal-scorer for No. 4 UMass during its longest playoff run in history.

After downing No. 13 Harvard and No. 12 Notre Dame to claim the Northeast Regional title last weekend, the Minutemen (30-9-0) are set to make their first-ever appearance in the Frozen Four.

As one of only five remaining players from that first season under coach Greg Carvel, it’s fitting that Boeing, who saw the program at its worst, is arguably having the most success at its best.

“I think the main thing is, coming into this year being my last year, it added a little motivation to try and continue my career,” Boeing said. “Like Carvy says, ‘We’re playing on borrowed time.’ You want to bring your all to every single game and just do your best. At times, you don’t want to overthink and think about, ‘Oh, what’s after this?’ You just want to see how far you can take things.”

In five postseason games, the senior has racked up five points on four goals. He scored twice in Game 2 against New Hampshire on March 16 and added two more in last Friday’s 4-0 shutout of the Crimson. In UMass’ shutout of the Fighting Irish the next night, Boeing’s shot spurred John Leonard’s highlight-reel tally that made the game 2-0, solidifying the Minutemen’s position on college hockey’s biggest stage.

“I say it all the time: When he’s a difference maker, we’re a really good team. So, he’s quietly a very important part of our team. He’s very responsible. He’s one of these kids, you can throw him anywhere – power play, penalty kill, first line, third line, fourth line – he’s just very versatile and you need kids like that on your team.”

Boeing spent the summer going into his senior season putting in extra work with Leonard and UMass strength and conditioning coach, Clayton Kirven. Six months after the season began, he hasn’t missed a game and, safe to say, that extra work in the shadows of Mullins has paid off.

“That’s been to my advantage this year,” he said. “I’ve been able to stay healthy throughout the year. So, conditioning-wise going into the playoffs, I feel pretty high-energized and ready to go.”

Aside from Boeing, Kurt Keats is the lone Minuteman senior left from the 2016-17 roster that experienced just five wins and that 17-game losing streak. Now, the two can’t help but bask in the moment.

“Even talking to Keatsy – we’ve talked the last couple of weeks – we just never would have thought that we’d be here,” Boeing said. “Even just to get this chance is something that both of us will remember for a long time. It’s been pretty emotional. My last game, going out with a pretty convincing win against UNH, was pretty emotional for me and Keatsy and some of the seniors. Just to see how we’re going — to get to the Frozen Four — you can’t stop yourself to think about how special it is and how emotional it can be at times but going up after that game to see my parents and their reaction, it was pretty special.”

According to Carvel, watching Boeing endure this final run has been pretty special, as well.

“He’s like the other older guys on the team – it’s great to be part of this, but [they’re a little] wistful that it came late in their time at UMass,” he said. “But those kids will always carry with them that they turned the program around, and that’s really heavy stuff. It’s easy to go to a top program and maintain it, it’s a different thing to go to a team that lost 17 in a row and finish your career in the Frozen Four.”

For Boeing, the difference two years has made is palpable.