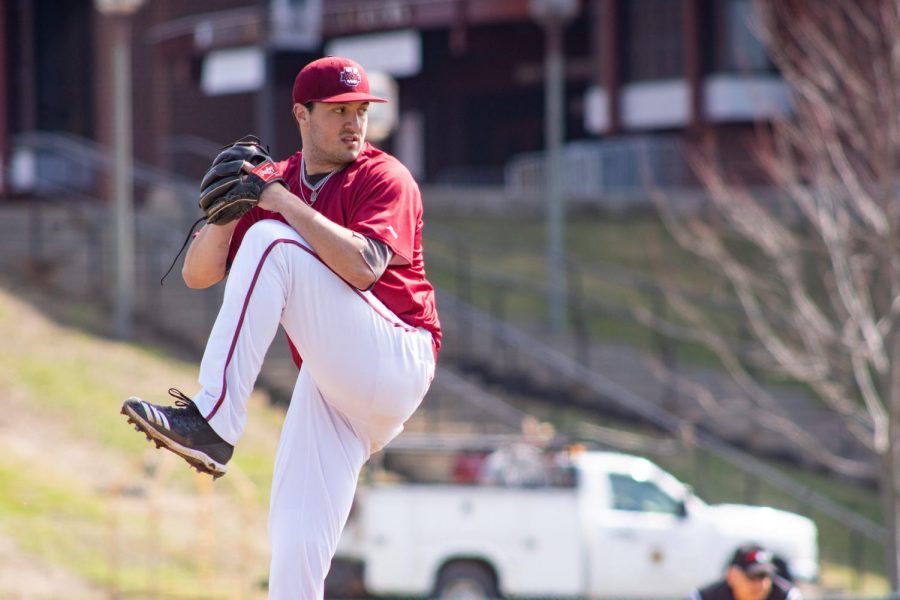 It felt as though the Massachusetts baseball team was trapped in a bizarro world Sunday afternoon.

For a team that struggles to put up runs, exploding for 17 rounds around the bases isn’t something many have come to expect from UMass (8-18, 3-6 Atlantic 10).

“Obviously we got off to a good start,” said redshirt freshman Collin Shapiro, who finished the day with six runs batted in. “[Anthony Videtto] got us going with the two-run home run and I think that really set the tone for the rest of the game.

“We just kept putting on the runs which is something that we had been struggling to do and we just put our pedal on the gas and did it today.”

The regular culprits of offensive success were on their game Sunday – Videtto’s home run in the first inning and Shapiro’s two hat tricks worth of RBIs would’ve been enough to match Saint Louis’ output.

It was the bottom of the lineup who added the insurance.

Heading into the game, Ryan Lever, Alec Norton, Logan Greene and Luke Oliphant were batting under .222 and struggling. All finished with two or more hits. Opposed to the past, the entire lineup was hitting. All nine starters in the lineup had at least one hit and six of the nine had at least an RBI.

This was a reason to be excited for coach Matt Reynolds.

“It’s fantastic,” said Reynolds. “Top to bottom. Oliphant had a key base hit bunt for us that kept the rally going and then Norton started to collect some big hits this weekend. There are some other guys I’m missing too.

“Lever had a nice weekend. It was good,” Reynolds added. “I thought top to bottom there were no easy outs, which is how you’ve got to be as an offense.”

Reynolds went on to say that things aren’t always like they were on Sunday.

“You’ve got to make them really earn outs and at times, if we just don’t have it that day, it’s going to be a non-competitive out to the opponent,” he said. “It makes it hard to score runs because you only get three outs per inning.”

The person most happy with the offense on Sunday wasn’t even in the lineup – he was on the mound.

UMass starter Sean Harney was tasked with opening for the Minutemen on the mound and it was far from his best performance. He couldn’t have been happier to have the run support.

“Especially as a pitcher, if you’re not confident with all your pitches that day or whatever it may be, having the offense behind you and getting the runs that you need to win a baseball game, it’s a great feeling,” said Harney. “It’s just going to help in the future to know that they’ll always be there for you.”

The trends of late have been in favor of the Minutemen. Since the 12-game losing streak, they’ve won four of the past five games and runs have been aplenty.

For Shapiro, the series against Saint Louis provided a chance to get some massive results. The leadoff man went 10-for-15 on the weekend with a walk off, eight RBIs and his first collegiate home run.

“It definitely feels good to see the ball find holes and get in the gaps,” said Shapiro. “Obviously it’s a big confidence booster but I never feel bad going up to the plate. I always feel like I see the pitches well. I always have a lot of confidence in myself when I step up there. It’s just added reward when you finally pay off.”

For the team as a whole, to have the offense firing on all cylinders is something that pleases Reynolds.

“I think so,” he said when asked whether or not this would help the team’s confidence. “Statistically, that was one of the better pitching staffs nationally. They have some really quality arms and to be able to do what we did against them. It should give us some more confidence for sure.”

Shapiro summed up the long-term effects of a complete offense best.

“I think one through nine if we can continue to not even have this good of a day, but to get contributions from everybody, we’ll be a dangerous team in the conference.”