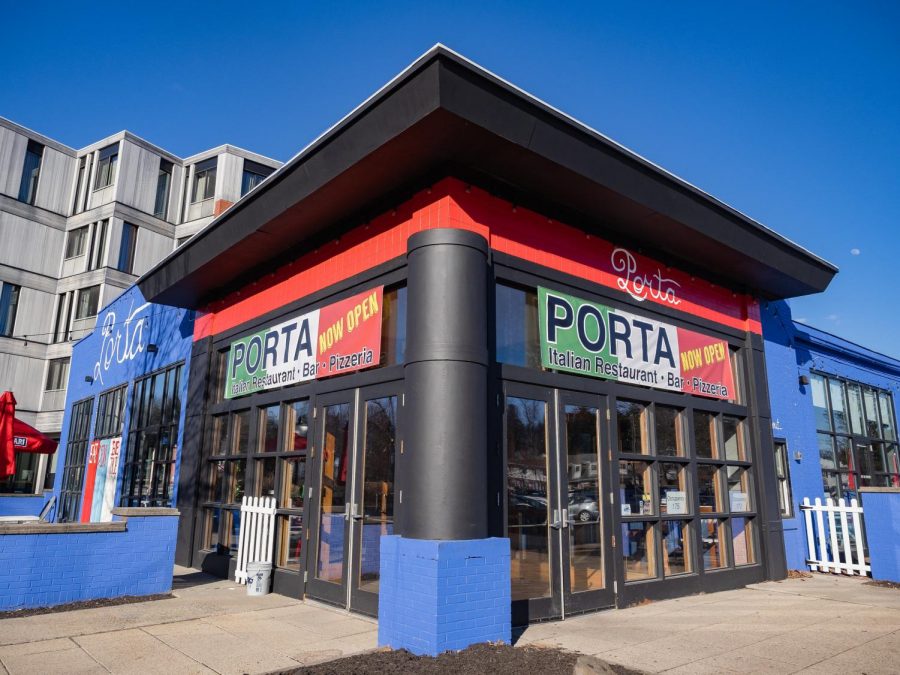 Despite the development, former investors and employees of Porta issued serious allegations against owner Richard Annunziata, who said he is making changes in restaurant operations and management to rectify the issues.

Building Commissioner Rob Morra also confirmed Porta’s certificate of occupancy to operate as a class II establishment, adding that this certification does not impact any ongoing investigations by the Amherst Police Department.

The six-week-old Amherst restaurant has been involved in multiple controversies, including a hacked Instagram account and a trademark violation lawsuit from a New Jersey restaurant of the same name. Recently, the Amherst Police Department began investigations of possible violations including serving alcohol to minors and serving alcohol after closing time.

However, one of the original financial backers of the Amherst restaurant blames Annunziata specifically for its controversy and failures. Ruben Luster of Myrtle Beach, South Carolina said he invested $150,000 in Porta with his business partner Phil Wright in December, and walked away from the business a month ago after unsuccessfully trying to convince Annunziata to leave the company.

Annunziata declined to comment on Luster’s involvement, but acknowledged he was a “starter investor.”

“If I had known then what I know now, I wouldn’t have worked with him,” Luster said, calling Annunziata a “shady character.”

The original business agreement, according to Luster, would require Annunziata to travel to Amherst and set up the restaurant, before eventually stepping aside to allow Luster and Wright to take over in directing management. Luster and Wright have extensive business experience, jointly operating seven establishments: seafood restaurant The Whiskey Fish, Crocodile Rocks Dueling Pianos Bar and five Bagel Factory locations, all in the Myrtle Beach area.

Visiting the Amherst area a few times during the winter, Luster felt it was “a great idea” to set up a restaurant in the college community. The focus was intended to be on the food portion, with the bar as an added bonus. Now, he feels that Annunziata has run the business like a nightclub, echoing a sentiment expressed by Amherst Building Commissioner Robert Morra.

When asked what went wrong with the business, Luster said, “Everything. Richie Annunziata to be specific.”

Luster and Wright have already written their investment off as a loss and don’t plan at this time to pursue legal action against Annunziata.

“He has more lawsuits against him than I have fingers,” Luster said. “[Porta] is out of money…eventually somebody is going to shut them down.”

In a post to the Porta Instagram account, Annunziata addressed the ongoing trademark lawsuit by apologizing to “everyone who was offended by the opening of [his] restaurant Porta” and claiming the New Jersey company was suing him due to greed.

“They’re trying to shut down a cool place for people to hang out when they never planned on opening one here in the first place. If they still operated to their original philosophy, they wouldn’t want to shut me down,” he wrote.

In a later interview, Annunziata said the lawsuit looked like it was moving toward a settlement, and said he believed some of the controversy surrounding his business was the result of a “litigation strategy” by the New Jersey Porta.

“Don’t listen to all the rumors,” Annunziata continued.

According to Belchertown electrician Jim McKemmie, invoices he sent several weeks ago continue to be unpaid. He added the complaint is common among contractors in the area who feel “jerked around” by Annunziata.

Starting in October, McKemmie completed multiple jobs for Porta, including the removal of existing lighting and bringing the restaurant to code. McKemmie said he began work on the condition of receiving cash payments each Friday but he then wasn’t paid for 10 weeks, at which point he received a check. Later, a second check bounced when McKemmie attempted to deposit it. After repeatedly confronting Annunziata, McKemmie received a partial payment for the check in cash from Luster, who was still involved at the time.

In early March, McKemmie sent an invoice for the final work he did with Porta, which was hanging speakers and setting up DJ equipment. While McKemmie did receive checks covering partial costs, he said these checks also bounced due to “insufficient funds” in the Porta business account. In addition to the bounced checks, McKemmie said he is owed $3,500 by Annunziata.

“It’s terrible, I’m giving him my services and not getting compensated. I don’t do this for fun, I need to pay my mortgage. I have bills to pay and [I need to] support my family,” McKemmie said.

In 30 years of business, McKemmie said he has never been in a situation like this before. Visiting Porta “on almost a daily basis,” he eventually went to the Amherst Police Department on Saturday, April 6 to file a complaint. Following advice from the authorities, McKemmie plans to go to the district court in Northampton if he doesn’t receive his money by Monday.

“I just want to be compensated fully,” he said, adding that he plans to use evidence of bounced checks to seek a lien on the business in case Annunizata plans to sell, which would require any debts to be paid.

Annunziata said the restaurant is processing the invoices and they are “not past due” on accounts.

“I would suggest that local contractors stay weary of him,” McKemmie said.

At the close of his interview, McKemmie said he knew that he wasn’t the only one facing payment problems from Annunziata.

“I was outside [of Porta] when a kid came up to Rich [Annunziata] asking for money,” McKemmie said, adding that he knew of kitchen staff who had quit shortly before.

Jack Kenney, a UMass senior, DJed at Porta in mid-March with the intention of becoming a regular, but he did not return after being asked to DJ at the Amherst Pub on the same night.

Kenney recorded a two-part podcast for his channel, “D’s Get Degrees,” interviewing multiple former employees of Porta to learn more about potential violations committed by restaurant management, as well as reasons employees chose to leave the restaurant.

In an interview with the Massachusetts Daily Collegian, Kenney remembered seeing free and discounted “Happy Hour” drinks, a violation of Massachusetts’ strict alcohol regulations including a happy-hour ban passed in 1984. Kenney said the night he worked went until 2 a.m., despite the fact he was told the restaurant wasn’t able to be open past 1:30 a.m.

“They’ve done a lot of things you technically aren’t supposed to do,” Kenney said. “It seems like they just think they’re like, these genius marketers that are doing things nobody else is doing, but everybody else would be doing them if they could be doing them.”

Annunziata listened to both episodes of the podcast after someone sent him the link by text. He felt the story “changed a lot” and that the end of the second episode, Kenney and his guests essentially “admitted that a lot of the stuff was made up.”

Brock Pereira, a UMass student who formerly worked as a bartender at Porta, said he was approached about the job while walking in downtown Amherst. While he felt early on that the restaurant had “a lot of potential,” Pereira felt the restaurant’s problems were with its owner.

“[Annunziata] f—ed it up,” Pereira said on Kenney’s podcast.

Lack of knowledge about local laws, Pereira explained, made it difficult for staff to communicate. Pereira alleged that taxes were charged on alcohol for the first few weeks and promotions like drinking hour took place, despite both being violations of Massachusetts law.

Annunziata said the new management in place “have all the certifications.” Previous management, he claimed, “just wasn’t working,” with many of them originally from New Jersey and unable to stay in the area.

Addressing violations of liquor laws, Annunziata said that a system of eliminating patrons with fake IDs has been implemented; he reasserted that his new general manager has previous experience with area restaurants and will be able to implement training to avoid breaking the law.

Pereira said he accompanied the women to file a report with the APD on Friday, March 29. The entry states that two women reported that the owner of Porta “had not paid them yet and owes each of them approximately $2,500” and “made harassing statements toward them.” A harassment order was not filed at the time.

Sara Larronde of Ware, Mass. began working at Porta on Feb. 28 after responding to an advertisement on Craigslist. While her primary position was working in food preparation in the kitchen, Larronde often cleaned the restaurant as well due to high employee overturn rates.

Larronde claimed that, while working in the kitchen, a lack of training led to all food being prepared in the same area even in the case of allergy warnings, which Annunziata said was being solved with new certification.

During the month she was employed with Porta, Larronde said she worked seven days a week, and even worked up to 17 hours in a day during the month she was employed by Porta. In total, Larronde said she worked 321 hours. In late March, she attempted to deposit a check for $900 in her bank account, but received a letter informing her the check had bounced.

She spoke with Annunziata, who asked her to wait a few more days before depositing her check as he added to the accounts. The next week, she attempted to deposit a second check, also for $900, but both checks – totaling $1,800 – bounced.

Annunziata said the situation was a “dispute about how much was owed,” and the method of payment for workers is being more closely managed.

Larronde, who is originally from Argentina, said that she felt Annunziata may have taken advantage of her lack of knowledge about local labor laws. She plans to contact the Labor Board to seek retribution.

Annunziata hopes to give his side “of the story on what [he] did with Porta” moving forward, and he believes that changes in management and a better understanding of local laws will solve the problems which have faced the restaurant thus far. Eventually, he plans to have a general manager “run the business” and has already begun to take a step back from day-to-day operations at the restaurant.

Editor’s note: A previous version of this article included Porta’s owner stating the establishment had been granted a class II license. The story has be updated with a confirmation of that information from Steven McCarthy, Amherst licensing coordinator, and Building Commissioner Rob Morra.