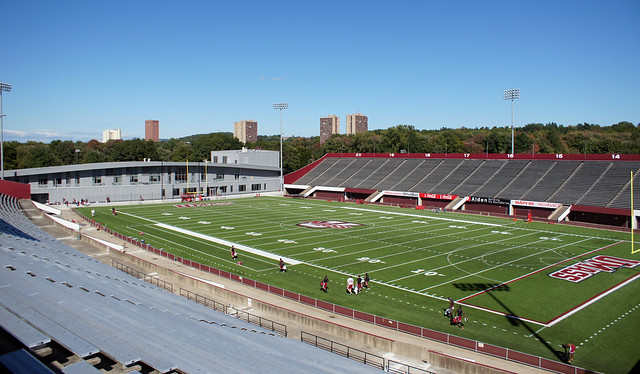 During the first half of the spring season, Paschall frontloaded the special teams with punt and kickoff return work, saying after practice on Tuesday that the coaching staff has “a pretty good idea of who’s going to be on those two units.”

Before coming to UMass, Paschall spent the 2018 college football season as University of North Carolina’s special teams coordinator. UNC’s special teams were top-ranked in several statistical categories in 2018. The Tar Heels finished tied for 10th in punt return defense, 16th in punt return average and tied for 19th in blocked kicks. They also were 35th in kickoff return defense, 50th in kick return average and 42nd in net punting.

The Minutemen’s 2018 special teams ranked lower than UNC in each of those categories, and sometimes significantly lower. The Minutemen registered no blocked kicks, were 116th in net punting, 84th in punt return defense and 83rd in punt return offense.

One way the coaching staff has tried to get the players to buy into special teams is by forcing every player, even the starters, to participate in special teams work.

“No special treatment for anybody,” said offensive lineman Larnel Coleman. “So it’s like, if you want to play, you want to start, you got to get on special teams, and that really makes people want to go all-out, because I know last year we were kind of ‘Aww, special teams? Here we go.’ Now it’s, ‘All right. This is part of the game. You got to get into it.’”

In addition to being the special coordinator, Paschall is also associate head coach and wide receivers coach. It seems like a lot to juggle, but Paschall asserts that he is handling all of his role fine.

“I’ve kind of been doing it for a long time, just without the titles,” he said.

In the limited time that he’s had this spring to lay the groundwork for the special teams, head coach Walt Bell is pleased with the progression of their units.

“That was kind of the best part of the scrimmage,” Bell said. “We got 12, 15 live full-speed reps. Hardly any loafs. And technically, for this point in the spring where we are, I was really proud of those guys and coach Paschall doing a great job.”

Freshman Josiah Johnson noticed that, compared to the previous coaching regime, there has been a greater emphasis on the fundamentals of special teams under Paschall.

“Coach Paschall takes it very, very seriously,” Johnson said, “and I think just puts such a huge priority on it, that I think it’s really going to help us understand how important special teams is and really change around our game and hopefully get us to win some more.”