The anti-Trump: Pete Buttigieg is the Democrats’ best chance for 2020

We’re ready for the youngest president ever 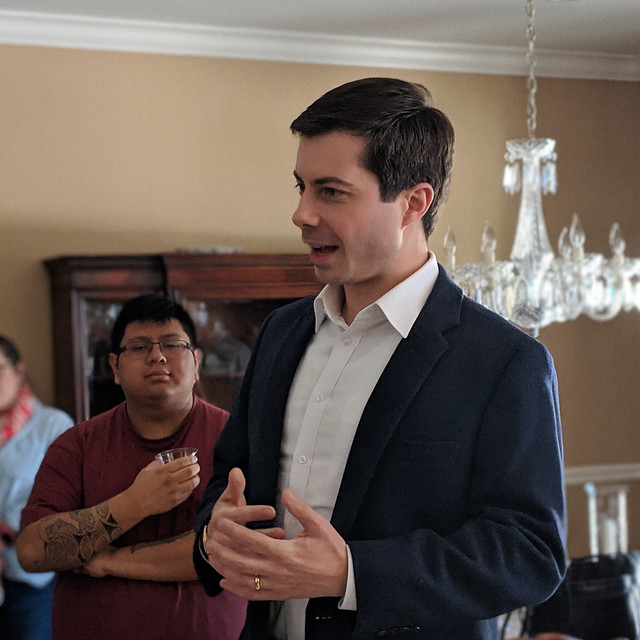 You probably can’t name a thing that he’s done. You probably haven’t even heard of his city. And you definitely can’t pronounce his last name.

Pete Buttigieg, the mayor of South Bend, Indiana, has recently dominated national news after word of his impressive and unique background spread. He has climbed to the third spot in Iowa polls leaving people questioning, “Who is this guy?” and “Can we just call him Mayor Pete?”

With a list of accomplishments longer and more diverse than most people twice his age, Buttigieg’s intelligence, drive and ability to succeed is undeniable. More importantly for the Democratic Party, he is about as different from Trump as possible, aside from skin color and gender.

Buttigieg became the mayor of South Bend in 2011 at age 29, making him the country’s youngest mayor of a city with over 100,000 residents. In 2014, Buttigieg took a seven-month leave to serve in Afghanistan as a lieutenant in the Navy. He came out as gay a year later, but it didn’t affect how voters felt – he was re-elected in 2015 with over 80 percent of the vote.

The son of a Maltese immigrant, it is no surprise that Buttigieg can speak more than one language. What is surprising is that he is a polyglot: he can speak Norwegian, Spanish, Maltese, Arabic, Italian, Dari and French, as well as English. Although Trump has family ties to Slovenia, Scotland and the Czech Republic, there is no evidence that he speaks any language other than English.

A recent video shows the candidate impressing a Norwegian reporter by answering a question in their native tongue. Buttigieg revealed he learned Norwegian in order to read the work of Norwegian novelist Erland Loe in the original language. Buttigieg even penned a book of his own, “Shortest Way Home: One Mayor’s Challenge and a Model for America’s Future.” I dropped French after just three classes and struggle to write a two-page essay. I’m impressed, and a little jealous, to say the least.

Buttigieg’s largest voting base would likely be millennials, who could make up about 27 percent of all voters in 2020. Obama praised Buttigieg in an interview with The New Yorker in 2016 as a promising leader for Democrats in the future. With a solid voting block and support from the former president, Buttigieg’s name may be correctly pronounced by a majority of the country in no time.

As a fellow millennial, Buttigieg will offer a refreshing perspective, with many well-known candidates being older and out of touch with the struggles of younger generations. Strong advocates of fixing the college debt crisis, such as Bernie Sanders and Elizabeth Warren, are decades too old to have first-hand experience dealing with the crippling debt from college expenses. At 37-years-old, Buttigieg has lived through it. He and his husband are still working to pay off college debt like the rest of us.

Buttigieg may also strike a chord with conservatives, surprisingly, as he comes from an extensive business background. A Rhodes Scholar with a degree in economics, he received the highest grade possible, called a “First.” He worked at consulting firms McKinsey & Company and the Cohen Group, proving that he does not lack in business experience and understanding.

Perhaps the only thing hard to digest about the young candidate (other than his sexuality, for some) is his last name. Don’t fret – according to his husband Chasten on Twitter, it can be pronounced various ways. Many other factors offset this minor inconvenience, though. Buttigieg plays piano and guitar and is restoring a formerly-vacant home in the neighborhood that he grew up in, a nod to his humbleness and normalness in a pool of larger-than-life candidates. The couple also have two rescue dogs, Truman and Buddy, and post about them on social media – how much more could someone ask for? Truman and Buddy also share a Twitter account, once advocating, “IT’S TIME TO PUT A PUGGLE IN THE WHITE HOUSE.”

Even considering all of his seemingly too-good-to-be-true characteristics, the mayor still has one thing to hold over his opponents – the cherry on top. There is no controversy surrounding him. No sexual assault allegations, no shady dealings and no insensitive comments from Buttigieg have surfaced. This will make it difficult for other candidates to criticize him and for Trump to make a nickname for him. He’ll probably think of something, but it won’t come naturally.

There is no doubt that electing the youngest and first openly gay president in 2020 is a long-shot, but Buttigieg will spark a conversation and set himself up for success in the future. Millennials will make sure of that, whether it’s to support his policies or to see more of his dogs.