Minutewomen hope to improve play on the road 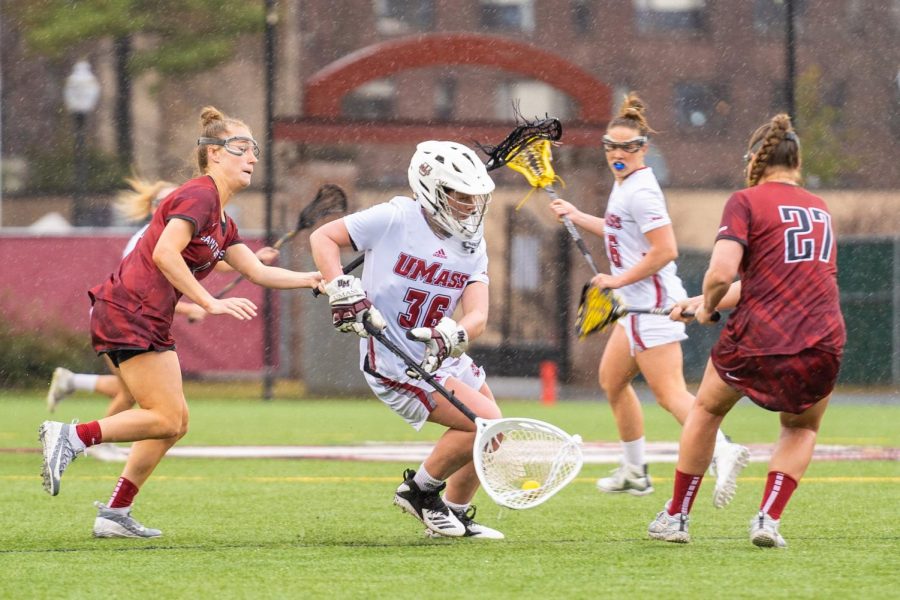 The Massachusetts women’s lacrosse team is set for its final road trip for Atlantic 10 play, starting with a trip to Duquesne on Friday night. This season has been strong for the Minutewomen (9-3, 4-0 A-10), as they are currently undefeated in the league.

After rolling George Mason 24-5 on Friday, the team faced its first real threat in conference play with Saint Joseph in Sunday’s 11-8 win over the Hawks. Cassidy Doster and Kelly Marra put the finishing touches on that contest with cushioning goals at the end of the final period.

“It was a little bit of a mixed bag, just overall, we had some plays, we made plays when we needed to, defense made some great stops,” head coach Angela McMahon said. “We were a little inconsistent throughout the whole game in every aspect. Definitely some things we want to improve on, and know we need to improve on as we move forwards, but happy to come away with a win.”

For the Minutewomen, offense has headlined most of this season’s action, but against the Hawks the defense really stepped up, especially in the end, holding off any final push that St Joe’s tried to muster up. Sophomore Audrey Fantazzia was able to corral three ground balls to go along with two caused turnovers, while freshman Amy Moreau registered a shot on net, matching up with one ground ball and caused turnover.

“I personally felt that our defense really stepped up through almost all aspects of our play,” said Moreau. “Communication, aggressiveness, getting second chances, all of the things that our coaches kind of preach, I feel like for the most part, all came together.”

Friday’s matchup comes against a Duquesne team (6-4, 1-3 A-10) coming off of its first conference win over Davidson on Sunday, they will be looking to stay in the winning column with home field advantage against a consistently tough UMass team.

“I think they have a lot of energy, they’re feisty and scrappy. I think they’re probably going to be excited to play us, a night game on a Friday night,” said McMahon. “I think we’re going to have to be sharp and make sure we’re trying to set the tone, and not coming out flat the way we did the other day.”

For the Minutewomen, going on the road has been a slight blemish in a strong season. They’ve gone 2-2 away from Garber Field to this point, and won their only road game of A-10 play over Davidson. However, their winning streak will be on the line, and they will be looking to keep the same intensity they have showed at home as of late.

“It’s no different, we do the same things, sometimes it’s nice to have a little bit of extra time that we can spend together with team meals, and some of the bonding that goes on on the bus or the plane and things like that,” said McMahon. “It’s really just business as usual, focus, being in the moment, not getting ahead of ourselves, not thinking too much about anything.

“It’s just trying to come away with a win on Friday that’s pretty much it, then we can take care of St. Bonaventure after that.”

After Friday’s matchup, the Minutewomen will set out for Olean, New York for a matchup with St. Bonaventure on Sunday at 12 p.m.

Cameron Sibert can be reached at [email protected] or followed on twitter @cameron_sibert.