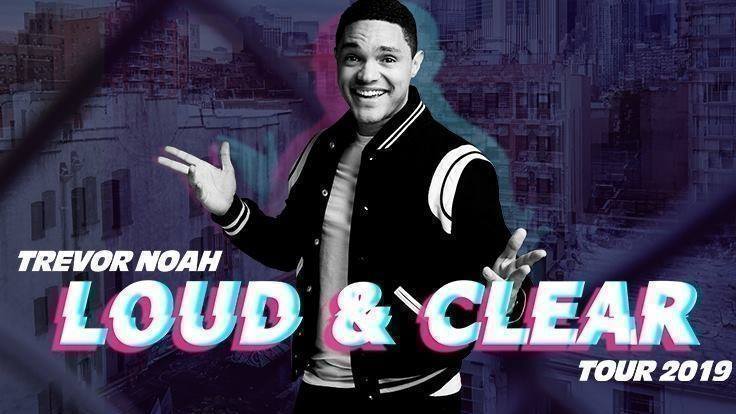 Trevor Noah, host of “The Daily Show,” stopped at the University of Massachusetts on his Loud and Clear tour last Friday, when nearly 1,000 people came to see the stand-up comedian perform at the Mullins Center.

Noah is able to find a healthy medium between easy jokes that anyone could laugh at and jokes that make him work for your laughs. Namely, Noah had the audience in a roar of cheers when he was able to compare his recent diagnosis of a UTI to women’s periods. The lesson of the joke being that men don’t get to complain about women’s body issues.

Another great round of laughs went to Noah’s take on President Donald Trump and, much like his work on The Daily Show, Noah didn’t hesitate to pull open his bag of impressions for this set. Noah likens the position of POTUS to being the pilot of an airplane, and he then walks through the various presidents that have flown America in progress.

Bill Clinton did some “naughty” things in the cockpit. George W. Bush flew the plane because his “daddy” got to as well. Everyone on the plane loved Barack Obama, even when things weren’t looking too great.

The peak of the joke came when Noah got to Trump, where he then mimicked a drunken version of the 45th president who confidently believed he could fly a plane over a woman who had been practicing how to to fly a plane her whole life (Hillary Clinton). Noah’s thick-shrieking-whiny Trump voice was the “zinger” to this whole joke, making crowds of people go wild over the hilarious exaggeration of Trump’s voice.

Noah’s humor is somewhere between slapstick and intelligent: The impression of presidents and typical white people jokes combined with nuanced discussions around sexism in America create an interesting feeling while watching the event. The audience is treated as just as smart as Noah is, and he even assumes that they are just as educated on hot button issues as he is and that they are on the same political page as him. At the same time, Noah doesn’t bore the audience with politics; he allows them to breathe from all the political nonsense with his “low-hanging fruit” jokes which often times get cheap laughs from the audience.

Noah presents much talent during his stand-up but that’s just it – he’s talented. If you attended the show knowing him from his work on “The Daily Show,” then you may have recognized that his style of humor on stage is not different from his presence on Comedy Central.

In an age where stand-up comedy is becoming more mainstream, especially due to the rise of Netflix’s several stand-up series, the medium is becoming more competitive, which only demands for newer types of humor. If Noah wishes to truly ‘wow’ a crowd with his brand of humor, then he may need to stretch beyond the typical jokes he tells on TV.

Don’t get me wrong, Noah is a comedic success. If he wasn’t, then there would be no reason for his Emmy nominations and win, or even the fact that he was chosen to take over as host of “The Daily Show” after Jon Stewart left in 2015. Noah is not a stand-out stand-up comedian, and maybe that’s due to the fact that Noah is still relatively early in his career as a comedian – he’s not as venerated as people like Dave Chappelle, Bill Burr or Jerry Seinfeld.

Understandably with the Loud and Clear tour, Noah is still trying to find his footing as a comedian. He’s still trying to figure out how to stand out amongst the crowd of late-night hosts, comedians and television personalities that have paved the way before him. And in that sense, it’s okay if he’s just good.