The Minutemen drop two of three at Dayton this weekend 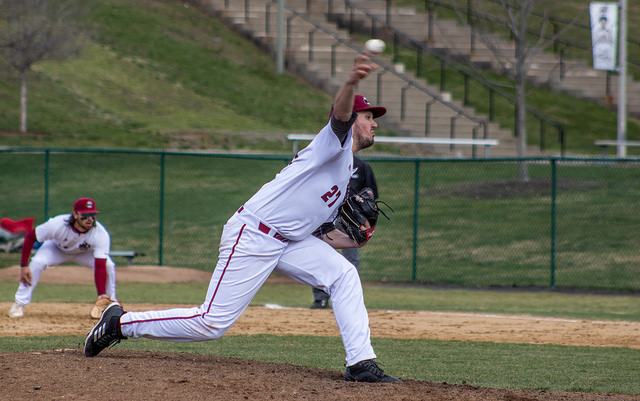 The skid is finally over, as the Massachusetts baseball team ended its 12-game losing streak with a 9-2 win over Dayton on Sunday.

“It feels good,” coach Matt Reynolds said of the win Sunday. “Kind of a relief. We knew we’d been playing a little bit better as of late, but the results weren’t there. It’s good to get a W.”

The turnaround came in the right arm of sophomore pitcher Sean Harney.

“He’s always given us good results but not always had great command,” said Reynolds of Harney. “He’s a strike-thrower. But today this was the best fastball command he’s had all year by far. He was really dominant. It was great to see. The good thing is he keeps getting better every single time out so we’re really happy with him. He was pretty electric today.”

Harney went 7 2/3 innings, allowing no earned runs on six hits with five strikeouts and two walks on 114 pitches. The sophomore’s only real hiccup came in the eighth inning.

Reynolds was impressed at the outpouring of support on offense but focused on how clutch his team was in big situations.

“At one point in the game, we were 5-for-6 when scoring guys from third with less than two outs,” said Reynolds. “That was great. That’s kind of been a thing for us. We haven’t been great at converting those so [it was] great to see the guys have some success there. I thought we swung it more confidently today.”

But not everything about this weekend was positive.

In the first game of the doubleheader on Friday, UMass senior ace Justin Lasko went six innings, allowing three earned runs on seven hits with a walk and six strikeouts on 104 pitches.

Heading into the sixth, Lasko had only given up one run on an Eddie Pursinger single to center field in the second inning. The sixth would prove to be the toughest for the hurler, as he gave up a three-run home run to Dayton sophomore Michael Cleary to make it 4-0.

Dayton tacked on two more in the eighth inning – one from a wild pitch and the other from a Cleary double – to cruise to the 6-0 win in game one of the doubleheader.

The story of the first game would continue into the second: a lot more runs for Dayton than for UMass.

The Minutemen jumped out to the early lead in the second when they plated two – one off a Dylan Judd single up the middle and another from a Thomas Pipolo single through the left side – to make it 2-0 UMass.

For the Minutemen, that would be the last time they would be in command of the game.

In the bottom half of the second, Dayton responded with six runs of their own, three coming off UMass starter Kevin Dow and three when Brad Collins took over during the inning. Collins’ were all unearned.

Dayton continued the onslaught, as they tacked one on in the sixth inning, a solo home run in the seventh, and three runs in the eighth to make it 11-2.

“We know that it’s no mystery right now that we’re trying to figure out who the third guy is on the weekend and we really don’t have that right now,” said Reynolds. “We’re kind of just doing it by committee on Saturdays.”

Despite the two losses on Friday, Reynolds hopes the team can use Sunday’s win as a kick-starter for success.

“We made most of the plays,” said the bench boss of his team’s 9-2 win on Sunday. “If we can just feel like we’re going to do the simple baseball things: throw strikes, make plays behind the pitcher, and swing the bat fairly well, we’ll give ourselves a chance to win all the time. But I do think having our monkey off our back, the streak if you will, just getting rid of that I think will be a little bit of a relief for us mentally that we can catapult off.”

The Minutemen look to build off Sunday’s win when they travel to Boston College for the first round of the Baseball Beanpot on Tuesday.