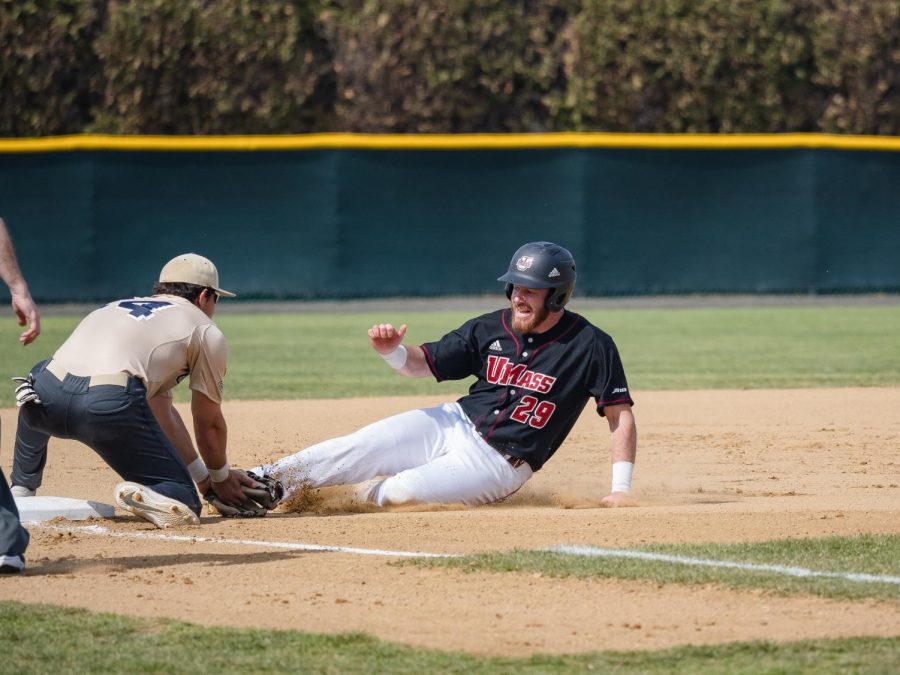 The Massachusetts baseball team was no-hit until the fifth inning against George Washington on Sunday afternoon, ultimately falling 4-2 in the series finale to end its three-game winning streak.

George Washington senior Nate Woods was the star of the game, going five and two-thirds innings and allowing no runs on one hit for the Colonials (21-15, 5-7 Atlantic 10). The Minutemen (10-17, 5-7 A-10) couldn’t muster a hit off of Woods until the fifth inning, when Luke Oliphant beat out a bunt down the third base line.

“[Woods] pitched really well and he did a great job of spotting his fastball on the outside corner,” coach Matt Reynolds said. “Obviously, it took us a long time to get ourselves going and it was just too little too late. It was just kind of a frustrating day at the plate.”

Colin Brophy, a redshirt sophomore center fielder, opened up the scoring for the Colonials in the top of the third. With runners on first and second and two outs, Brophy ripped a three-run homer out to left field.

The Colonials added a run in the top of the ninth when freshman catcher Anthony Frechette ripped an RBI single to left field to make it 4-0.

The bright spot on offense for the Minutemen came in the bottom of the ninth. With one on and no outs, designated hitter Logan Greene hit a two-run home run to left field for his second of the season.

“I was just looking for a good pitch to hit,” said Greene. “I mean we hadn’t been doing much with the bats all day. We were just trying to get baserunners there in the ninth, trying to serve something up.”

The home run made it 4-2 at the time, but the Minutemen couldn’t close the gap.

Sophomore right hander Sean Harney got the start on the mound for the Minutemen. He turned in a solid performance going seven innings, giving up three runs and four hits while striking out two and walking one. Harney did hit three batters but was able to work his way out of most jams.

“I came out there feeling really good, better than usual,” Harney said. “I got in a little jam in the third and missed my spot a little bit and paid for it, but overall the defense played really well behind me.

“The ball was coming out of my hand pretty well. After the third inning, I had to bear down and find a different way to get outs, and that’s what I did.”

Despite the offensive struggles, Reynolds isn’t concerned when looking ahead to the rest of the season.

Amid the offensive struggles, redshirt freshman Collin Shapiro had a streak of reaching base in 26 consecutive games snapped on Sunday afternoon. It was the first time in Shapiro’s collegiate career that he failed to get on base, going 0-for-4 on the day with two strikeouts. The streak was the longest for a first-year player since the stat was first recorded in 1996.

The Minutemen will host Connecticut on Tuesday afternoon at Earl Lorden Field before playing in the Beanpot Championship at Fenway Park on Wednesday against Harvard.

Ethan Nash can be reached at [email protected] followed on twitter @ethan_nash15.