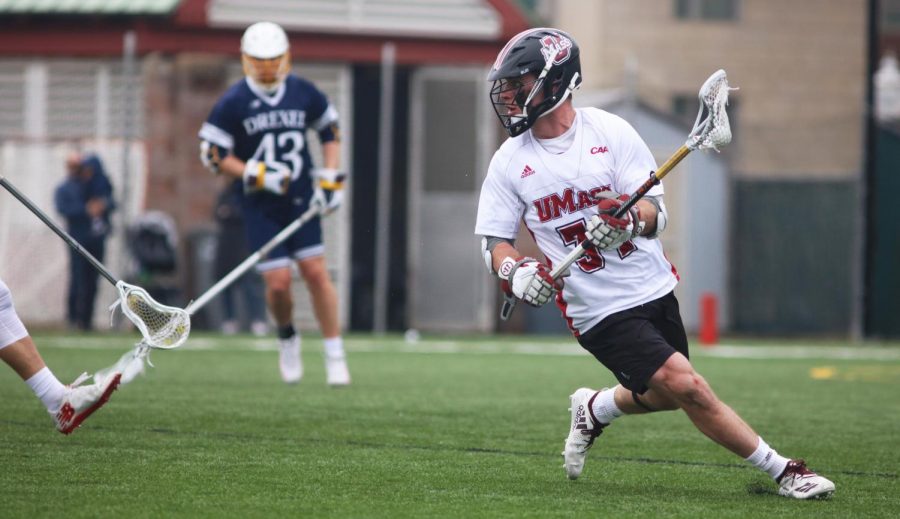 Coming off of a fifth consecutive win over Brown University last weekend, the Massachusetts men’s lacrosse team opened up conference play versus Drexel on Saturday. With 60-degree weather and a hungry attitude to defend their Colonial Athletic Association title, the Minutemen came out swinging.

The Minutemen struggled through a rocky first half, kept afloat by two goals from sophomore attackman Chris Connolly in the first quarter. UMass was beat out on two defensive possessions, putting them at a disadvantage as Drexel took advantage of the opportunities and tallied three goals in the first, ending the quarter with a one-goal lead over UMass 3-2.

From there, UMass lost momentum going into the second quarter. The Minutemen suffered a scoreless quarter which led a four-goal deficit, as Drexel scored three more goals in the second. UMass was left scrambling going into the halftime break, trailing 6-2.

“We had a lot of opportunities in the first half, and we didn’t cash in on them,” said Connolly. “For us, it’s the mindset of that we just need to keep doing what we’re doing and playing our game, it’s the only way we’re going to come back.”

UMass certainly did not stay down for long. Drexel was assessed a holding penalty shortly into the third quarter, and Connolly netted a hat trick on an extra man opportunity, assisted by senior midfielder Ben Spencer. From there the Minutemen began to slowly chip away at the Dragons’ lead.

“I think every coach asks their guys to play with intensity, play with their heads and make smart decisions on the field, but to also play together,” said coach Greg Cannella. “It shows that our guys hung together and stuck together and endured being down 6-2 and then chipped away. It’s about togetherness, in a nutshell.”

Junior Charlie O’Brien scored his first goal of the season after Connolly’s third of the day to bring UMass within two, 6-4. Drexel soon answered O’Brien’s goal to further widen the gap to 7-4, but it was the last of the quarter for the Dragons, as O’Brien struck again followed by a goal from redshirt junior Billy Philpott to cut the deficit to 7-6.

In the fourth quarter, Drexel struck first with a low shot goal from junior attackman Matthew Varian. Shortly after, Drexel had a third face off violation, and was assessed an illegal procedure penalty. UMass took advantage of the extra man opportunity with freshman attackman Gabriel Procyk’s goal, assisted by Connolly.

Varian answered Procyk’s goal to make it 9-7 Drexel, but it still wasn’t quite enough. The two teams went back and forth, before junior midfielder Jeff Trainor’s goal and Connolly’s no-look, over-the-shoulder strike tied the game with 7:04 left in the fourth quarter.

Senior face off specialist Tom Meyers dominated in the fourth quarter, earning possessions for the Minutemen to give them the advantage in the quarter. Meyers went 6-for-7 on draws in the final frame.

“The face off game is probably most important in that fourth quarter in tight games,” said Cannella. “Because if you get possession after possession, you’re going to be able to come back, or you’ll be able to close the game out.”

Meyers gave UMass the edge, and with that advantage Trainor scored the last and winning goal to push the Minutemen over Drexel 10-9.

Drexel did not have the opportunity to make it back, as they were called for two separate penalties for interference and slashing with 13 seconds left in the game.  The extra man advantage held for the rest of the game, ultimately sealing the win for them.

“The extra man opportunities we had were big in that second half,” said Connolly. “Special teams are huge, in any sport honestly. For us to score when it mattered on man up was definitely very vital for us in that win.”

The Minutemen head to Hofstra Saturday to continue CAA play. When asked what the team hopes to bring to Hofstra this upcoming weekend, Cannella didn’t reveal much.

“We hope to bring a good attitude to practice Monday, and we’ll start from there.”