UMass gives up last-second goal, loses in overtime of A-10 championship 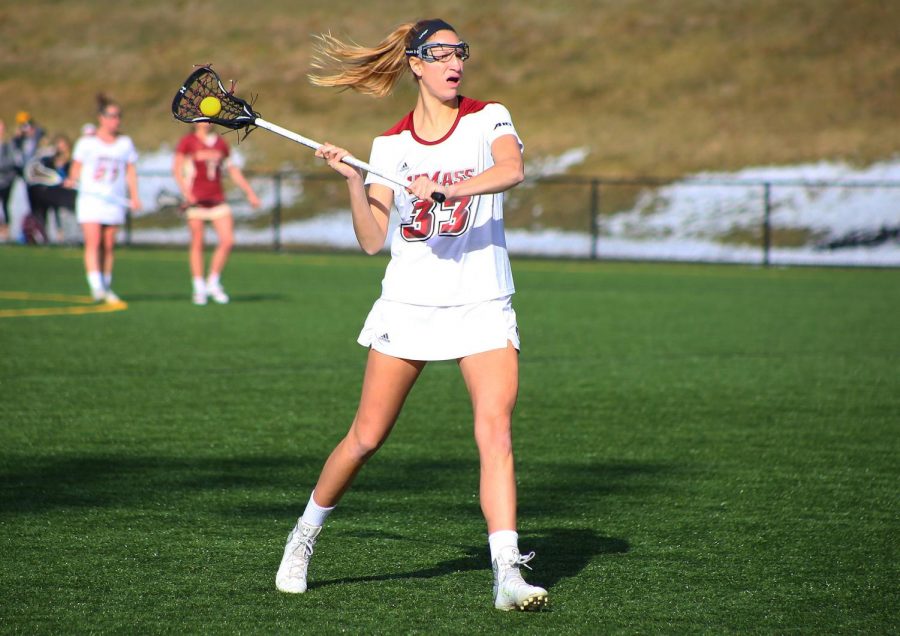 After a turnover by Richmond’s Madison Ostrick with a minute left, the Massachusetts women’s lacrosse team had the ball with a one-goal lead and the shot clock turned off in the Atlantic 10 championship game.

Instead, UMass (15-4, 8-1 A-10) committed its 20th turnover of the day with under 30 seconds to play, and Sam Geiersbach scored for Richmond (17-3, 9-2 A-10) with just four seconds left to force overtime. For the second straight year, the Spiders came out victorious in the extra period, as Geiersbach scored again after another UMass turnover to cap off a 19-18 win.

“They forced a turnover and were able to capitalize on it,” coach Angela McMahon said of the overtime period. “We did our best, we fought really hard. I thought we had plenty of chances to win, and Richmond was just the better team today. Or when it counted, I should say.”

Kiley Anderson staked the Minutewomen to an 18-14 lead with 8:46 remaining on her 67th goal of the season, and UMass seemed poised to hold off Richmond and reclaim the A-10 title. But the Spiders scored four more times as the Minutewomen stalled out on offense, managing just two shots against four turnovers after Anderson’s goal.

“They were putting a ton of pressure on us,” McMahon said. “Lot of pressure, and I think we had a couple turnovers, but it goes back earlier in the game. We had a lot of opportunities all over the field offensively, we could’ve put more shots away.”

UMass led 12-8 at halftime thanks to a last-second goal by Kaitlyn Cerasi from the edge of the circle at the end of the first half, and tacked on two quick goals early in the second half to stretch the lead to six. Richmond kept up the pressure, however, scoring three in three minutes to cut the lead to two.

The ending belied what was a strong day for the Minutewomen, who outshot and outdrew Richmond. Caitlyn Petro was particularly strong on the draw for UMass, coming up with 18 personally as the Minutewomen won 30-of-38 draw controls.

While the Spiders only won eight draws on the day, they came up with the ball at the start of overtime, and the Minutewomen never got a chance on the attack.

“It ended up going on the ground,” McMahon said. “Caitlyn was really successful winning it to herself [earlier], but this one went on the ground and became a 50-50 ball, and they won the battle for that ball.”

UMass was undermined by 22 turnovers, including two in the final 90 seconds of regulation and two in quick succession in overtime, and an attack that grew stagnant at the worst possible time. Goalie Lauren Hiller also struggled in the stat sheet, recording just seven saves while allowing 19 goals.

“I think some of the shots she was seeing were tough, right down the middle at her,” McMahon said. “We talk about trying to force low angles and forcing shooters to the outside, and I think a couple times they really turned a corner and were able to insert themselves into the middle.”

McMahon continued: “With talented players like Richmond has and players that go with such speed and intensity, when they start rocketing shots, there’s only so much that you can do. I thought we slowed them down a couple times, but they had too many chances.”

With the loss, UMass’ season is over.