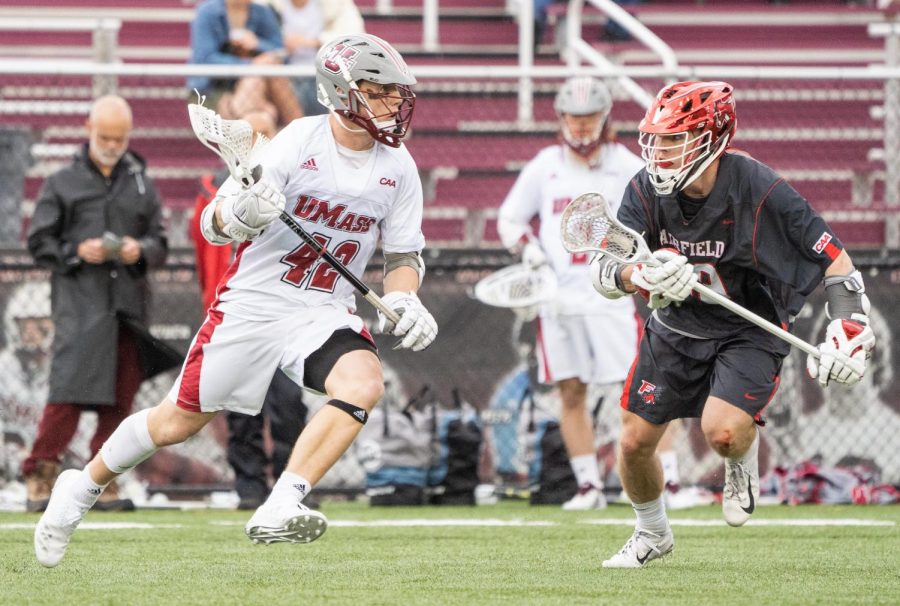 The Massachusetts men’s lacrosse team defeated Fairfield in dominant fashion on Saturday, 17-8, behind five goals from Gabe Procyk and 21 saves from Sean Sconone, a personal best.

The No. 15 ranked Minutemen (9-4, 3-1 Colonial Athletic Association) stormed their way to an early 7-0 lead a little over five minutes into the second quarter. UMass established its transition game early, with Isaac Paparo and Dan O’Brien each getting a shot on net within the first five minutes of the contest.

At the 4:54 mark in the first quarter, Jeff Trainor was fed the ball in stride during a semi-transition opportunity, and he sliced through Fairfield’s scrambling defense and fired in a goal, putting UMass ahead 3-0. Trainor, Charlie O’Brien, Gabe Procyk, and Chris Connolly accounted for the following four goals which put UMass on top 7-0 early into the second.

The Minutemen had success with passing the ball from X to up top, then back down for some easy doorstep finishes. Gabe Procyk benefited the most from the Minutemen’s ball movement. The freshman led all scorers with five goals on the afternoon.

In the Minutemen’s previous outing, they let up seven goals to Towson in the fourth quarter, nearly allowing their CAA foe to come back for the win after leading them 12-3 through three quarters. UMass was a little better closing out Saturday’s game, surrendering four goals in the fourth quarter while tacking on three of its own. Still, Cannella did not believe his team played a full 60.

The Minutemen will wrap up their regular season schedule when they host Delaware on Friday at 5 pm at Garber Field.

Sean Sconone, who entered the contest leading Division I in GAA with 8.09, had a brilliant day, making a career-best 21 saves with the help of his top-ranked scoring defense.

Isaac Paparo exited the contest early into the fourth quarter after appearing to have gotten “the wind knocked out of him,” according to Cannella. Cannella said that his star defenseman seemed “fine,” but did not have much comment beyond that. Paparo did not return to the contest.

The ’89 and ’69 men’s lacrosse teams were celebrated at halftime: the ’89 team for leading UMass to its first-ever quarterfinals appearance in the NCAA tournament and the ’69 squad for its undefeated campaign.