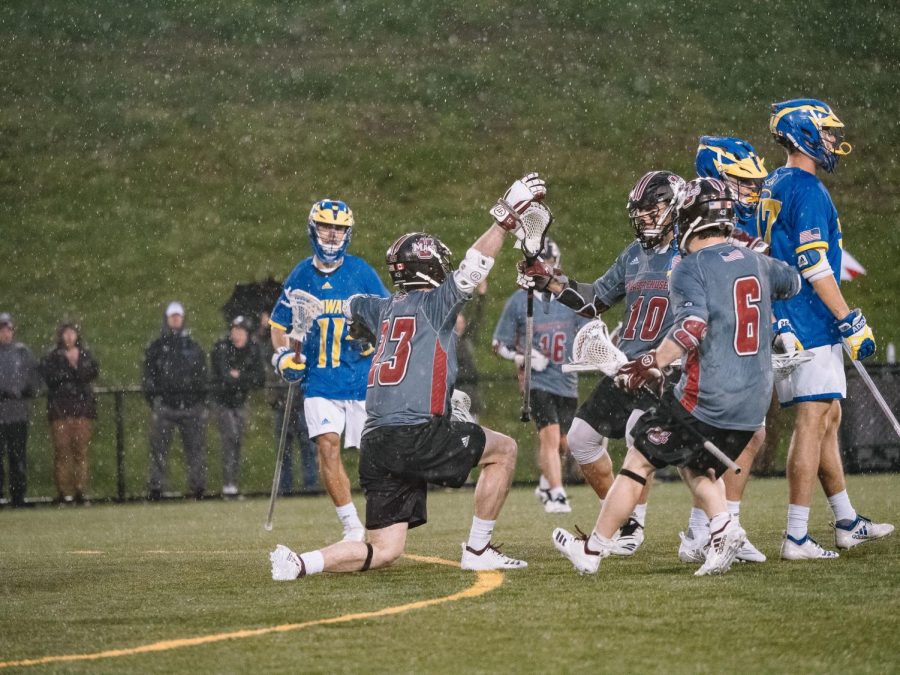 The Massachusetts men’s lacrosse team battled against cold and rainy weather to eke out an 11-9 senior day win over Delaware on Friday. With the win, UMass clinched the No. 1 seed in the CAA tournament, which it will host May 2 and 5.

Head coach Greg Cannella was proud of the way his team battled through the weather conditions in addition to the nicks and bruises everyone carries at this point of the season.

“We’re proud of our guys and the way that they finished the game, the way that they were able to be composed late in the fourth quarter when we really needed them to be,” said Cannella. “Earlier in the year, we weren’t in games, and fortunately for us we were tonight.”

With the score knotted 9-9 and 2:06 left in the contest, Jeff Trainor notched the go-ahead goal by rolling to his left and striking a shot past Delaware’s Matt DeLuca. Delaware called timeout at the 1:32 mark but was not able to score out of it. The Blue Hens pulled DeLuca, and Billy Philpott raced all the way up the field and around the back of the cage to stick in the dagger, and UMass walked away victorious, 11-9.

Kevin Tobin kickstarted the scoring when he drove right and slipped underneath his defender for a goal at the crease. Tobin ended up with five points on the day as a result of three assists and two goals. Nick Roy and Chris Connolly each added goals in the first quarter to give UMass a 3-0 less than 10 minutes into the contest.

Clay Miller finally got Delaware on the board with 3:34 left in the quarter to slow the Minutemen’s quickly built momentum. Delaware then scored three goals in the second quarter to make it a 5-4 contest in favor of UMass going into the half.

The wet field conditions seemed to cause numerous players to lose their footing and mishandle passes. However, Philpott said that the weather condition had little effect on UMass, citing that the team practices in brittle conditions all season long.

“I think it rained every Tuesday in the fall,” said Philpott. “All winter, even if it was snowing, we were on the field. We never went inside. So, when we saw rain, guys actually got excited. It was more comfortable for us.”

Tom Meyers controlled the face-off circle, winning 18 of 23 draws. Cannella was encouraged by the play of Meyers after the FOGO only won 13 of 25 face-offs against Fairfield last Saturday. Cannella was especially impressed with Meyers for how he responded after limping off the field early into the fourth.

“Tommy’s a warrior,” said Cannella. “He got knocked down, banged his knee, got back out there and still won the next three face-offs for us. We have a lot of confidence in Tommy and what he’s done for us this year. He’s had an excellent year.”

Charlie O’Brien was the first Minuteman to get on the board in the second half when he took a pass from Philpott and sprinted in for a score at the 9:54 mark in the third. By the 8:12 mark, UMass had torn off two more goals, one from Devin Spencer on a man-up opportunity and one from Dan O’Brien. Delaware proceeded to tear off three unanswered goals of its own, evening the score at eight apiece by the end of the third.

“We knew they were a good team,” said Isaac Paparo. “We figured that they wouldn’t stop fighting the whole game, and we were expecting that. So, they crawled back, we just sticked to our game plan…the ability to just hang in there and weather the storm a little bit but not change how we play is a great job by the guys.”

Chris Connolly and Charlie Kitchen were each responsible for the goals that sent the game to 9-9 in the fourth before Trainor and Philpott gave UMass the late lead.

The Minutemen will begin CAA tournament play on May 2 at Garber Field. The time is TBA.