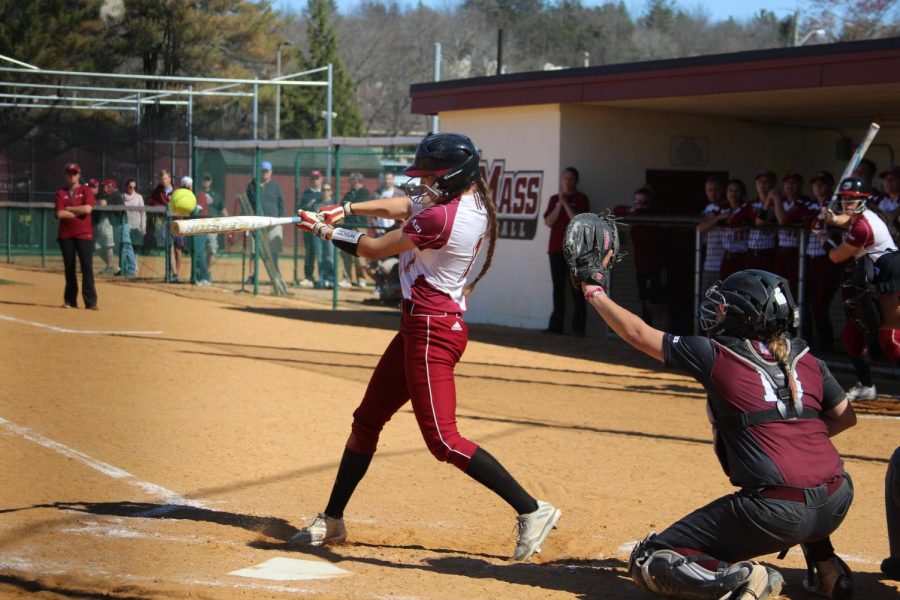 The Massachusetts softball team will take a mid-week break from conference play when it travels to Storrs, Connecticut to face the University of Connecticut Wednesday afternoon.

The Minutewomen (14-14, 3-1 Atlantic 10) are itching to get a leg up on their old foe as they lead the all-time series 49-45-1 against the Huskies (13-18, 2-4 AAC). The two sides haven’t played each other in two seasons following a weather cancellation that prevented the last matchup from happening.

UMass is also using this game as a bounce-back opportunity following a loss to Saint Louis over the weekend that ended its 22-game unbeaten streak in the conference. It will face a tough task against the Huskies’ pitching corps, which has a collective 3.83 ERA.

“We always have a plan,” said senior Kaitlyn Stavinoha. “I think we’ll go in and be really prepared. Ronnie [Gajownik], our hitting coach, does a good job of preparing us. We practice for who we’re going to see, and I think we’ve all been seeing the ball well lately so honestly, I think we just need to relax and focus on what we do best and hit the ball.”

It is definitely an interesting matchup for UMass in the battle of hitting versus pitching, but there are underlying advantages that the Minutewomen hold against UConn.

UMass has been on fire as a hitting group, racking up 23 hits last weekend. The team has been receiving incredible contributions from Stavinoha, who is batting an outstanding .407 and had six hits in the doubleheader against the Billikens. Stavinoha was recently named A-10 Player of the Week for the second time this season.

“It’s my senior year so the mindset for me is that I just need to step up for my team and do what it takes to win,” said Stavinoha. “I’m not really thinking ‘Oh, I need to get a hit’ or ‘I need to keep my batting average up’ or anything like that. It’s just what I can do to help the team and score runs and get people moving.”

Senior Erin Stacevicz in also only one run away from tying for 10th all-time in the program’s history.

“It’s definitely something that I’ll cherish when I get there,” said Stacevicz. “I just have to keep playing my game and do whatever I do on the field to get there and if it happens, it happens.”

The Minutewomen will look for matchup win number 50 Wednesday at 3 p.m. in Storrs, Connecticut at the Burrell Family Field.