Minutewomen fall in game one but take game two 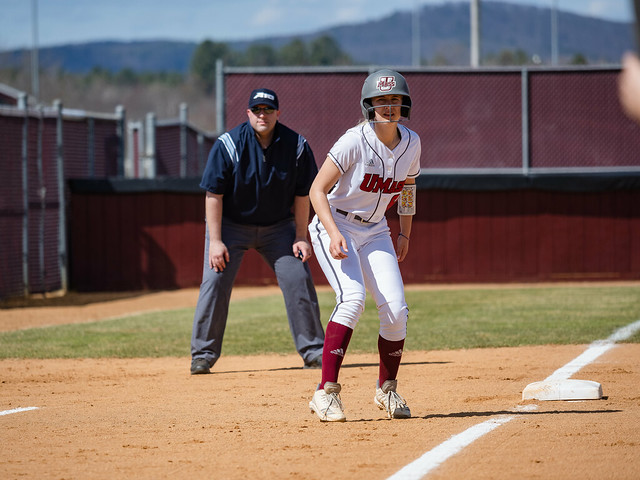 The Massachusetts softball team earned a split in its Wednesday afternoon doubleheader against Rhode Island. The Rams took game one 4-3 and the Minutewomen (21-18, 9-3 Atlantic 10) took the second tilt 2-1. Both games were closely contested and neither team was able to get comfortable at any point.

The latter half of the doubleheader saw a brilliant pitching performance from Quinn Breidenbach. Breidenbach made only one mistake – a solo homerun by URI’s Erica Robbles in the bottom of the fourth. Aside from that, Breidenbach silenced the Rams’ (15-26, 4-11 A-10) bats by only surrendering five other hits.

“Quinn did a really good job of getting ahead of batters early and often,” said UMass coach Kristi Stefanoni. “When she is able to do that, she is able to keep the rest of her pitches a little bit of the plate and we don’t necessary have to come with something that’s closer to the plate and have it get hit. She had a little bit more pop on the ball today, but she was able to get ahead in almost every single at bat.”

With the win, Breidenbach improves her record to 8-4 and Wednesday was her first complete game of the season.

In the second inning, UMass was able to get a run across the board. Melissa Garcia started the inning with a single before Jackie Kelly came into the game to pinch run. Danielle Ellis bunted advancing Kelly to second who was brought into score on a Kendra Allen single to centerfield.

UMass held the one run lead until Robbles’ fourth-inning shot evened the contest at one.

In the sixth, Ellis laced a double to left center with one out. Then, Stefanoni, after Allen popped up to second, elected to put Kristina Day into the game as a pinch hitter for Alyssa Lion.

“She has consistently been hitting the ball well and very hard,” Stefanoni said of Day. “I do not know; I can’t really explain it. I just had a gut feeling that it was time to put her in.”

The freshman made her coach look like a genius when she added the second double of the inning, sending a ball down the left field line off Rams starter Sarah Gunderson to score Caroline Videtto, who had come in to run for Ellis. The Minutewomen took the lead and never looked back, earning a 2-1 victory.

The first game of the day was another pitchers duel. Freshman Kenadee Rausch pitched well for UMass, only surrendering six hits and going the distance in the loss.

Becca Rogers and Julia Warasky were just a little bit better for the Rams. Rogers went six and Warasky came on in the seventh to earn the save and preserve the 2-1 victory.  UMass could only muster together three hits in the defeat.

The Minutewomen started the game off by scoring a quick run in the first inning thanks to an error by the Rams. URI would respond in the bottom of the first by scoring three runs, two of which came from errors by UMass.

They would add a fourth run in the fifth inning before the Minutewomen attempted to rally in the final two innings. They pushed two runners across in the sixth to cut the lead to one.

In the seventh, Hannah Bunker started the inning with a walk and advanced to second on an Erin Stacevicz bunt. Kaitlyn Stavinoha recorded the second out on a flyball to left. Kaycee Carbone walked to put runners on first and second for Melissa Garcia, but she grounded to second base to end the game and give the Rams the game one victory.

UMass will be back in action this weekend when it hosts Fordham at Sortino Field.