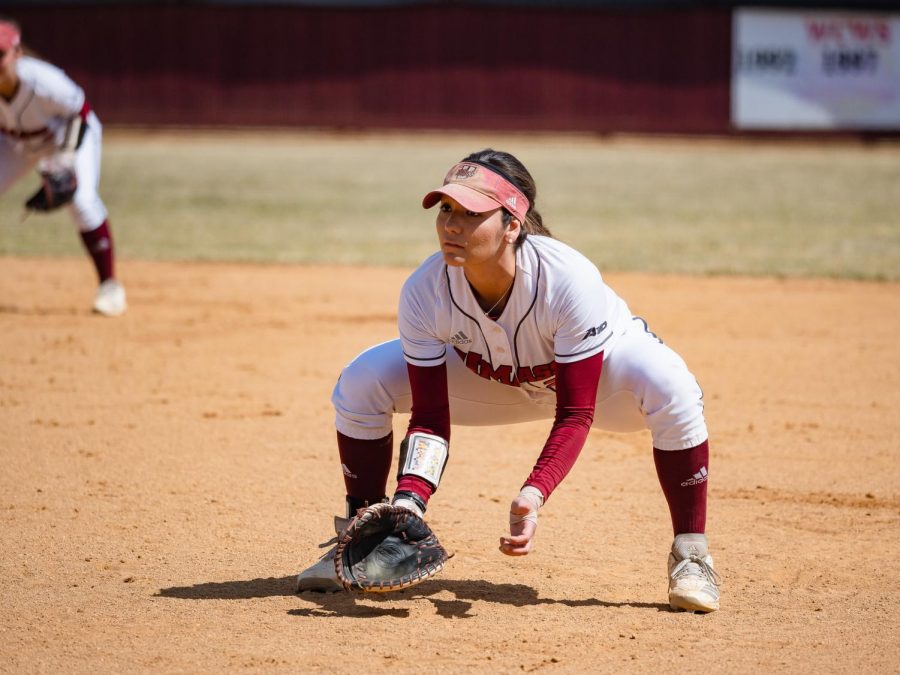 “I thought they were two really gritty team wins, probably more the second one than the first one,” coach Kristi Stefanoni said. “The first one I thought it was really good for us to get our first home win. It’s a conference game and sometimes you get a little bit of nerves playing at home in front of your home crowd.”

Committing four errors over the first two innings, the Minutewomen faltered behind La Salle early, allowing the Explorers to build a 4-1 lead off UMass starter Kenadee Rausch. Rausch, who was pulled after 2 1/3 innings, was charged with only one earned run as a result of the UMass fielding errors.

“[Coach Stefanoni] said we didn’t look really in it, we weren’t really ready for the ball,” Stavinoha said. “We were kind of on our heels. I think we just had to attack more and know that if we go out there and do our job, it’ll work out.”

Trailing to start the bottom of the third, the UMass bats came to life. Erin Stacevicz ignited the Minutewomen rally with a leadoff double. With two outs and two on, Alyssa Lyon came up clutch, ripping a two-RBI double to left center to give the Minutewomen a 5-4 lead.

Lyon was a key contributor in each of UMass’ games against La Salle, hitting four-for-five with five RBIs over the two games. Stefanoni thinks Lyon stuck to the hitting plan well during her performance on Saturday.

“[Alyssa]’s a really good line drive, fly ball hitter for us,” said Stefanoni. “She’s got a lot of really good power. Thankfully today, there were people who got on ahead of her and she was able to do her job with people on base.”

The Minutewomen added insurance runs in the fifth and sixth innings, highlighted by a Lyon sacrifice fly and a Stavinoha home run.

After Quinn Breidenbach gave UMass 2 1/3 scoreless innings of relief, the Minutewomen turned to their ace Kiara Oliver to finish the game and complete the save. Oliver slung the final 2 1/3 innings of the game, tallying two strikeouts and completing the save after pitching a shutout earlier in the day.

Oliver says she doesn’t mind pitching twice in one day.

“I did it a lot last year,” said Oliver. “We had Meg Colleran here and I used to come in sometimes with her. We would swap roles. I’m getting used to it, it’s not bad,” she chuckled.

Oliver was excellent in the pitching circle, allowing only two hits and mowing down eight La Salle hitters through a complete game six-inning effort.

“[Oliver]’s lights out,” said Stavinoha. “She knows that this year she’s going to have to carry a lot of the load and the other two are doing what they can. She’s awesome, you can’t say enough about Kiara. She’s great.”

Allowing batters to reach in each of the first four innings, Oliver quickly worked herself out of trouble, striking out five Explorers through the first two. She continued her early dominance on the mound by forcing double plays in each of the next two innings, including an impressive unassisted double-play by UMass first baseman Melissa Garcia to end the third.

The UMass bats got started early, as a two-out double from Kaycee Carbone knocked in Kaitlyn Stavinoha from first base to put the Minutewomen up 1-0.

To start the sixth, the Minutewomen made quick work to complete the mercy rule victory. A Kendra Allen hit-by-pitch paired with a Minutewomen walk and La Salle error put two runners in scoring position for Stavinoha. Stavinoha ripped another two-RBI single into right field to push the runners across and secure the 8-0 UMass victory.

“It’s always good to produce for the team,” said Stavinoha. “Just trying to score my teammates, they’re doing a good job of getting on base.”

Oliver’s performances on Saturday lowered her ERA to 2.33 through 114 innings on the season. Stavinoha has seen her batting average rise to .441, and her RBI total climb to 28.

“[Stavinoha]’s been phenomenal,” said Stefanoni. “Flick [Stavinoha] will give you a battle at the plate no matter what. She will just keep swinging until she finds a way. I think the team feels very confident with her at the plate right now. I think she feels really good. She’s also one of the most competitive kids on the team and she will find a way to get it done.”

The final game of the three-game series against La Salle is set for Sunday. First pitch is slated for noon.