UMass women’s lacrosse looking to cut back on turnovers

Fixing turnovers is a mental game 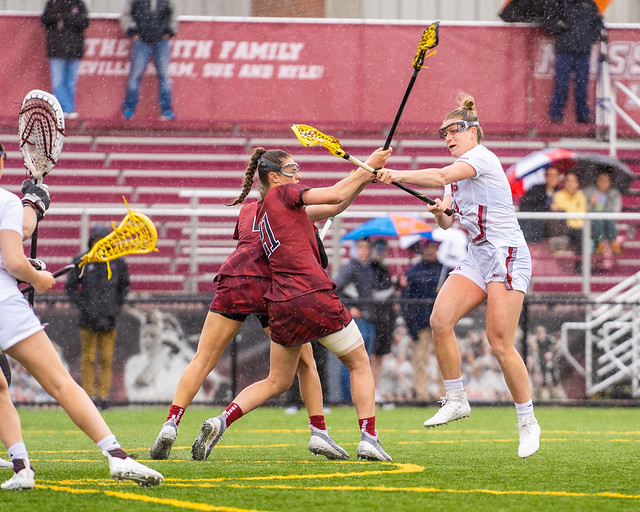 UMass (11-3, 6-0 Atlantic-10), with its last road game on tap for this Friday against La Salle (5-8, 3-3 A-10), will have to make some end-of-season adjustments sooner rather than later if they plan to be a well-oiled machine come time for the playoffs.

Cutting back on turnovers, for one, is a point of emphasis.

“It’s all mental,” McMahon said. “Is there physical pressure? Yes. But we’re fully capable of physical pressure. We’ve showed our resilience through that. I’m not overly concerned about it, it’s just something that we’re trying to minimize.”

In games against Saint Joseph’s and Duquesne, the Minutewomen combined for an ugly 51 turnovers. It wasn’t until the most recent game, against St. Bonaventure, where the team started to cut down on turnovers, recording just 14.

“With any sport, if someone makes a mistake and they dwell on it then the outcome won’t be great,” McMahon said. “We’ve got to move on, focus on the next play and focus on the task at hand.”

That’s exactly what the Minutewomen did on Sunday, nearly halving the number of turnovers from the prior two games.

“I don’t think necessarily that it’s been a problem for us all season long,” McMahon said. “We want to minimize those opportunities where we’re giving the ball to the other team—we want to have more possessions than them.”

To put things into perspective, the Minutewomen had the most turnovers in a season in program history in 2017, with 355. Through 21 games that season the average turnover per game was 16.9—a number that is uncomfortably close to the turnover average this season.

Maybe there isn’t a cause for concern, though, because the Minutewomen capped off that 2017 season with another perfect A-10 performance, as well as a trip to the second-round of the NCAA tournament.

This year, the Minutewomen continue to do what they do best—stay perfect in the A-10. McMahon and company are just looking for ways to tighten up the team before even more meaningful games start coming their way.

“It’s [about] increasing the pressure,” McMahon said. “Just facing that intense, physical pressure consistently; working through it and identifying the times it comes up in practice.”

“It’s about taking a breath, relaxing and playing calm; really being positive minded. Having a positive, confident mindset is 70 percent of the battle. It’ll just be about us bringing good energy, intensity and confidence.”

It’s a long season, but UMass women’s lacrosse is no stranger to playing deep into the spring. They’ll need all the positive energy they can get going into the final home stretch this year.

UMass will be in action next on Friday against La Salle. Game is set to start at 2 p.m. from Philadelphia.