Minutewomen overcome 25 turnovers to stay undefeated in the Atlantic 10 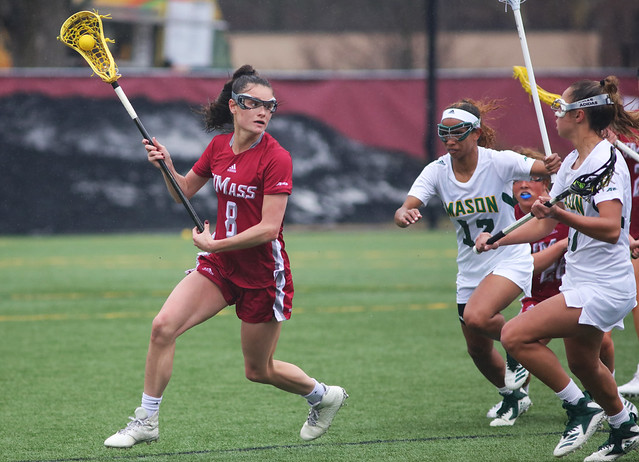 With seven minutes to go in the first half Friday night, the Massachusetts women’s lacrosse looked like it was on the way to another big win.

“Came away with the win, really happy about that,” coach Angela McMahon said, “but we’ve got to help ourselves a little bit more by not putting ourselves in that situation, especially when we have a lead like we did at the beginning of the first half.”

After Ally Murphy forced a turnover midway through overtime, senior Hannah Palau scored the winning goal off an assist from Stephanie Croke with 19 seconds left. It was the fourth goal for Palau and the second assist for Croke, who tied Palau for the team lead with four goals.

“Steph Croke in particular has really been stepping up over these past couple games, just playing great, and she had a really great feed to Hannah on the inside,” McMahon said. “Credit to our defense too, for making stops to get us the ball for us to put the game away.”

For the second straight game, UMass got off to a slow start, allowing Duquesne to score first as the Minutewomen were shut out on the attacking end for the first six minutes. When they broke through, though, they scored three goals in under a minute, the start of a 9-1 run.

That run left UMass with a seven-goal lead, but Duquesne wasn’t going away quietly. The Dukes put together five goals before the end of the first half and four more to start the second to reclaim the lead.

“They were putting a lot of pressure on us,” McMahon said. “When they were putting on that run, we got a little defensive. We got away from our aggressive side of play a little bit, but they came at us hard, and we have to be able to handle that better going forward.”

After Haley Connaughton scored with 1:30 left in regulation to give UMass the lead back, Duquesne won the draw and went back on the attack. Just 48 seconds later, Rilee Bradshaw scored her sixth goal of the game to force overtime.

“We just lost the draw,” McMahon said. “Once we scored, we really needed to come up with the ball, and they won the draw control.”

Although the Minutewomen pulled out the win, it was a shaky effort all around, as UMass committed 25 fouls and 25 turnovers on the day. The Minutewomen fell just one short of their season-high in turnovers, set last Sunday against Saint Joseph’s.

“They definitely stepped up on D,” McMahon said. “We had our chances, it was just lack of execution. Lack of execution and some careless turnovers, things we need to clean up. But they came at us hard. They’re a much-improved team than they were last year and they really fought and have some pretty good players, so they’re going to continue to get better.”

With the win, UMass remains undefeated in the A-10 with four games to play. Next up is a road game at Saint Bonaventure, currently 2-11 and 1-4 in the A-10.