An entire garbage trunk was sorted 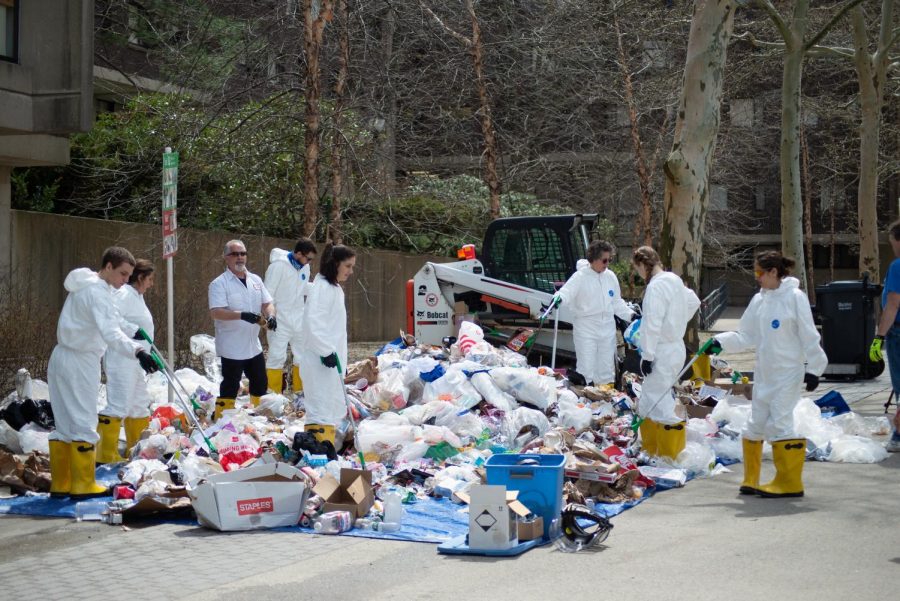 Pizza boxes, beer cans and a diaper amongst other pieces of garbage were placed in neat piles on a blue tarp on Monday afternoon, as part of a campus effort to call attention toward the importance of recycling in the Southwest Residential Area.

The Earth Day waste sort lasted two hours on the Southwest concourse and had about 10 volunteers at a time rip open trash bags and sort through to find materials that could be recycled or composted. The Southwest Residential Area was chosen specifically because it has a lower recycling rate than any other area on campus.

Laurie Simmons, the sustainability manager for UMass Residential Life, explained that the purpose of the sort was to “illustrate first, how much waste we create just in our everyday lives, but also how much of it didn’t have to go to landfill.”

“There’s probably a pretty significant portion of this giant pile of trash that could have been either composted or recycled,” Simmons said.

Although the pile of trash was not weighed beforehand, it was able to fill an entire garbage truck. Most of the trash was collected Monday morning from residence halls, with a few bags picked up over the weekend. Simmons said each residential hall from Southwest had one of their bins dumped into the truck, so the pile was a representative sample.

“We hope passers-by leave realizing that we create more waste than is really necessary,” Simmons said. “[We also hope people] start paying attention to their trash because it’s so ingrained in our culture that we don’t think about it at all. So this is just meant to help people.”

Among the volunteers sorting through the trash in white coverup suits, yellow boots and black gloves were Campus Sustainability Manager Ezra Small, Director of the Office of Waste Management John Pepi, ResLife Marketing and Communications Coordinator Lacey Olson and Waste Reduction Coordinator for the Town of Amherst Mimi Kaplan.

Each year, UMass produces 3,000 tons of waste to landfills, according to the UMass website.

Also according to information provided by UMass ResLife, “The amount of trash thrown away by residents each year is enough to fill 47 percent of one of the Southwest Towers.”

Alexia Perides, the Student Government Association secretary of sustainability, volunteered today because “It’s a really great way to bridge students and faculty staff together to really get a clear, honest look about what is going on with our waste system.”

Perides hopes this event will give students an inside look at the work people do once their waste is sent off to a landfill.

“I’m a little weathered, this isn’t really a surprise anymore,” Perides said when he first saw the pile of waste. “But I’m excited to go in and see what dorms are producing because they are different from somebody who lives off-campus versus obviously classrooms and different things. So I think really getting in will give me a better feel.”

Perides echoed Simmon’s sentiment that the waste produced by students living on campus is different from other areas and populations of the UMass community.

“We’re going through student waste, and it reflects on UMass, but it’s also is the students. Like if you look at how staff deals and waste, like people who are actually working within OWM, are doing a great job. So I don’t want this to reflect poorly on their job.”

“You have to be educating students on what goes where and so, are we doing it the right way? Are we getting to students, or students just not very receptive? Those are always the big questions.”