Members of the science community came out to address climate change 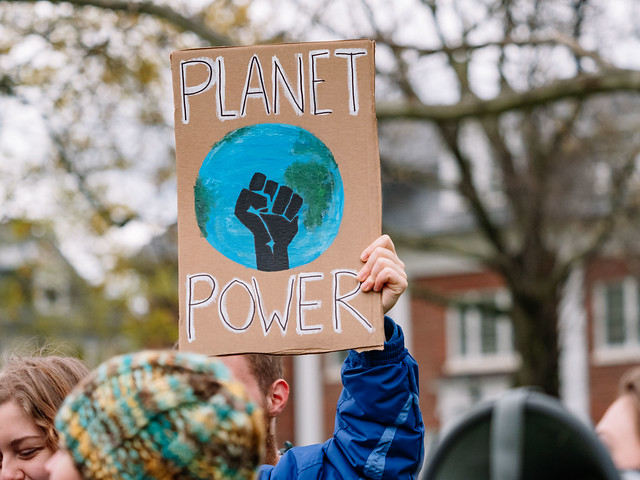 A group of about 30 scientists and citizens concerned about promoting science and making it accessible to the general public met for the 2019 Western Massachusetts March for Science.

The participants met at 9 a.m. at Kendrick Park and proceeded to the Amherst Town Common at 10 a.m. for the 10th annual Sustainability Festival. First held in 2017, the march was organized by the University of Massachusetts That’s Life [Science] blog and the Amherst chapter or “pod” of 500 Women Scientists.

“It came out of the 2016 election with getting more women into STEM,” said Michelle Jackson, a member of the 500 Women Scientists. The organization gets its name from an open letter published by graduate students at the University of Colorado Boulder in support of “science and for women, minorities, immigrants, people with disabilities, and LGBTQIA.”

Their original goal was to get 500 signatures of support, but they have since obtained over 20,000, and numerous pods of individuals looking to take action and build community have sprouted up across the country and the world.

The pod, which meets once a month and has about 56 members, has conducted other activities, including voter registration drives in UMass science buildings.

“We registered 100 people to vote in the last election, and I bet we inspired another 200 to find their local polling station,” said Kristen DeAngelis, a microbiology professor at UMass and co-chair and founder of the Amherst 500 Women Scientists pod.

Eve Beaury, a UMass graduate student, helps run the That’s Life [Science] blog, a website made up of articles written by graduate students from a variety of scientific disciplines. The website serves to provide information about life sciences to the general public.

“We have a rigorous editing process to make sure our blog is written clearly, accurately and accessible to anyone who wants to join the conversation,” Beaury said.

“We’re here to speak as descendants of the land about how we understand stewardship and what we understand our position is,” said Rolf Cachat-Schilling, who said a Nipmuc prayer for the group before the event began.

Marchers held signs that read, “There is no Planet B,” “Science is Real!” or “Face the Facts! Climate change is Real!”

“It’s sad to think that people are so divorced from their own mother planet that they’re thinking about leaving here,” said Rolf Cachat-Schilling in response to the concept of a “planet B.” “But we’re perfectly adapted for this planet.”

Despite chillier-than-average April temperatures and light rain, the group kept spirits high, chanting “science matters,” and “single use has got to go” as they progressed through downtown Amherst.

“We need to get more people involved in this because it’s really important that people understand that climate change is real,” said Laurie Weinstein, co-chair of the Amherst pod of 500 Women Scientists.

The march ended at the Amherst Sustainability Festival, where many stayed to check out ideas for waste reduction and sustainability among like-minded people.

David Geddes Jr. can be reached at [email protected]