Why one cactus is being criminalized to death, and why it should be saved 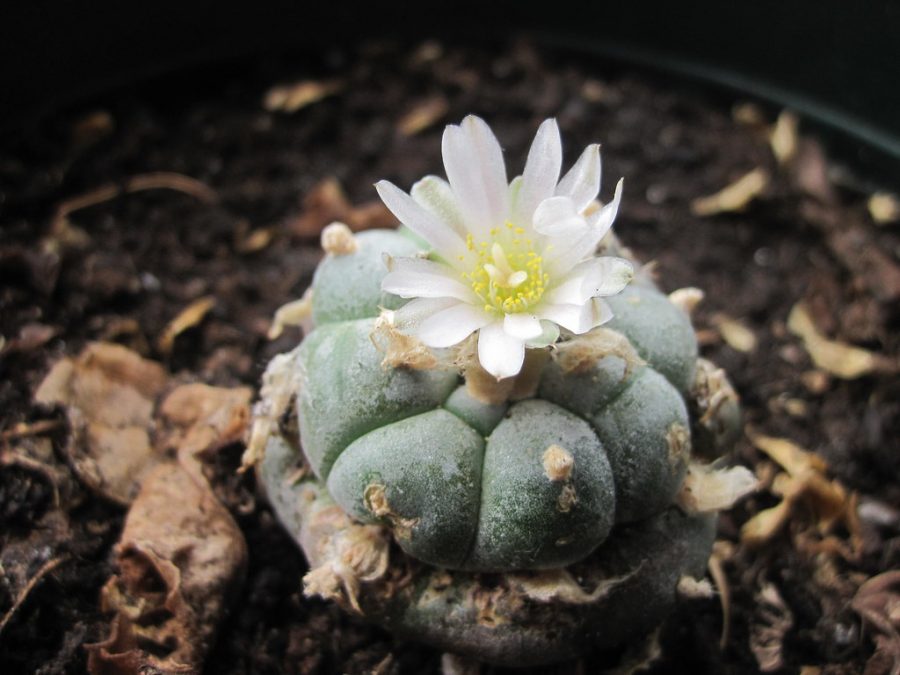 By Quinn He, Collegian Contributor

Growing in the desolate desert of Northern Mexico and the Southern region of Texas there lies a cactus whose history is as vast as the desert it inhabits.

The “Lophophora Williamsii,” commonly known as the peyote cactus, is a spineless succulent that grows low to the ground and can be as large as two to 12 centimeters in diameter and seven centimeters in height. This circular, buttonlike cactus will blossom a beautiful pinkish white flower upon maturation. Growth to maturity is slow, as the cactus can take up to 20 years to grow from seed.

The most fascinating characteristic of this cactus comes from its psychoactive alkaloid, mescaline. When dried, “Lophophora Williamsii” contains about three to six percent mescaline, which is more than enough for a significant psychedelic experience. The older the cactus gets, the higher the mescaline content. Native Americans refer the oldest peyote as “Grandfather Peyote” because they can be so old that their seeds have produce many lines of offspring. A peyote cactus the size of someone’s fist could be well over 30 years old.

The psychoactive effects of peyote are similar to other psychoactive drugs, but its uniqueness is what makes it so desirable. Psychological effects include an unfastened sense of reality, hallucinations, synesthesia and intense happiness that could be juxtaposed with anxiety and fear. One aspect that makes peyote different from more common psychedelics is the increased potential for nausea, vomiting, chills, stomachaches and dizziness, though these unpleasant symptoms subside after an hour or so.

This psychedelic – and some would argue healing – effect of the cactus is what brought many Native American and prehistoric cultures to use it in rituals and spiritual practices. Native Americans have used the cactus to heal illnesses, communicate with the spirits of dead relatives and inspire various religious ceremonies. The cactus was also used to treat toothaches, colds and fevers among indigenous people. Mexican cultures also used this cactus in multiple religious ceremonies. The “Lophophora” was to Mexico as the cross is to Christianity: a divine symbol representing happiness and religious ideals.

With radiocarbon dating of peyote buttons found in a cave near the Rio Grande, scientists were able to trace the plant back to around 5,000 years ago. So why don’t we hear much about one of the oldest psychedelic plants ever discovered? Thank the Spanish conquistadors, and later, the Controlled Substances Act.

During the Spanish Inquisition, priests condemned the use of peyote and led a crusade to eliminate a cactus that didn’t accord to their Christian teachings. Their intolerance to this cactus led to the persecution and eradication of the beautiful and spiritually significant “Lophophora Williamsii,” which led the reluctant Native American and Mexican tribes to go underground with their religious practices.

Today, “Lophophora Williamsii” is illegal to grow and possess as per the Controlled Substances Act of 1970. Peyote is a Schedule I drug, marking it as one of the most dangerous plants known to society, according to the government. There does happen to be a way to legally possess and ingest peyote, but the right is given only to members of the Native American Church – an organization exempt from this law thanks to the First Amendment of the United States Constitution. The right to express religious freedom protects the use and cultivation of “Lophophora Williamsii” for members of the NAC. In 1993, the church was granted permission by the U.S. government to legally harvest and use peyote.

Unfortunately, the naturally-growing peyote the NAC uses is edging toward becoming an endangered species. The once-abundant cactus has diminished from the deserts it once thrived in. Due to improper harvesting methods, poaching, urbanization around the natural habitat and lack of involvement by the government, peyote has seen a decrease in availability since the 1990s. “Lophophora Williamsii” is not getting the attention that it rightfully deserves in the realm of mediation for endangered plants.

Far too many people see the plant as a drug and while that’s true, it has a more significant role it plays in the lives of many people and our environment. The illegality of the peyote cactus prevents regular people from growing this cactus in their homes as per the government’s “War on Plants,” but this is doing far more harm than good. The cactus needs to be recognized as more than the outdated perspective seeing it as an insidious drug that only brings harm to a society. People need to be aware of the endangered status of the potentially medicinal cactus and the threat of extinction it faces.

This sacred, historic plant is part of our natural environment and for too long has been pushed to the side by decades of fear and ignorance. It is in need of more help now than ever before in the plant’s long history and without it, the once glorious “Lophophora Williamsii” could fall from history and disappear from the deserts it once generously thrived in.