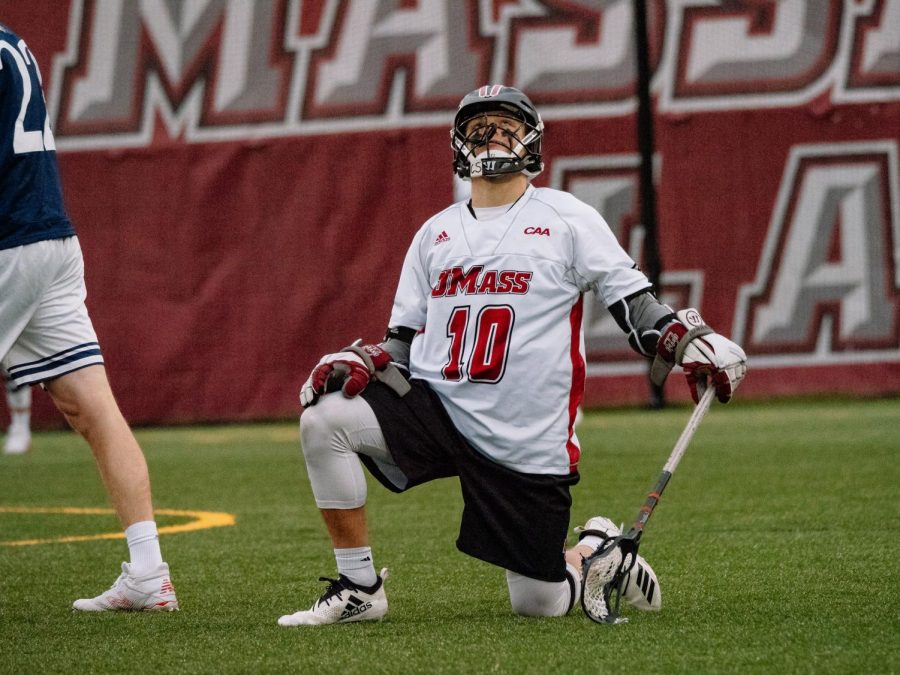 A sloppy first quarter plunged the Massachusetts men’s lacrosse team into an early 5-1 hole in the first round of the Colonial Athletic Association tournament, and UMass went on to fall 15-12 to Drexel on Thursday night.

UMass (10-5, 4-2 CAA) had several opportunities in the second half to mount a comeback, but poor execution and penalties hindered the Minutemen, and Drexel (7-7, 3-3 CAA) emerged victorious.

Head coach Greg Cannella said that the game was lost early on, with the Minutemen committing seven turnovers in the first quarter.

“I don’t know if we really had the chance to come back,” said Cannella. “Their goalie made some saves in the third and the fourth quarter…and then we let up a couple goals that we kind of bailed on, which you can’t do.”

Cannella indicated after the game that year-end awards snubs enabled Drexel to play with a bigger chip on its shoulder.

The first half was an ugly one for UMass. Nerves seemed to rack the Minutemen in the beginning, translating to poor fundamentals and execution on the offensive end. Described as “edgy” by Cannella, UMass wasted several possessions in the first half due to careless passes, some of which were induced by Drexel’s ride game, which bothered UMass the entire contest. The Minutemen never fully recuperated and looked shaky on offense the entire game.

“We turned it over, and they were unforced turnovers,” Cannella said. “There were a couple, three times where we just threw the ball away into the stands. So, that would be fundamental, yes.”

UMass was able to generate brief windows of momentum, including a moment in the second quarter when Sconone made a save and lofted an outlet pass to Charlie O’Brien in stride, leading to a quick transition goal for Devin Spencer on the other end.

The sequence exemplified the Minutemen’s transition-oriented style, but aside from that one play, UMass struggled to get its fast break going. The choppy pace of the second half, a result of the seemingly endless penalties—10 total penalties were assessed throughout the game—prevented UMass from being able to run and gun.

After losing all seven face-offs in the first quarter, Koita got the best of Tom Meyers in the second quarter, winning six of eight. In the second half, he continued to battle Meyers, taking eight of 15 face-offs over the last two quarters.

Koita’s efforts visibly animated the Drexel sideline, which seemed to feed off of his play.

“[Koita] did a nice job,” Cannella said. “I think Tommy wound up beating him by a couple, but [Koita] beat him in the second half, did a nice job controlling the ball to himself, took some fouls as well. Give him a lot of credit.”

Missed offensive opportunities also doomed UMass from coming back. With a minute left in the third quarter, Kevin Tobin turned the ball over during a man-up opportunity. UMass got the ball right back after Drexel turned it over while attempting to clear, giving Chris Connolly a wide-open run at the net. Connolly got all the way to the crease uncontested, but couldn’t cash in, with the Drexel goalie making an outstanding one-on-one save.

Then, in the fourth, Drexel turned the ball over on back-to-back possessions, leading to two decent looks on the other end for UMass, which couldn’t convert.

“It definitely would’ve helped to score those late opportunities,” Ben Spencer said, “but I thought we showed a lot of fight in the end of the game, and [there were] maybe some spots where there was a lack of finishing, but it was still a good fight.”

With the loss, the Minutemen’s season is likely over. It’s unlikely UMass will receive an at-large bid in the NCAA tournament given the small size of the CAA.