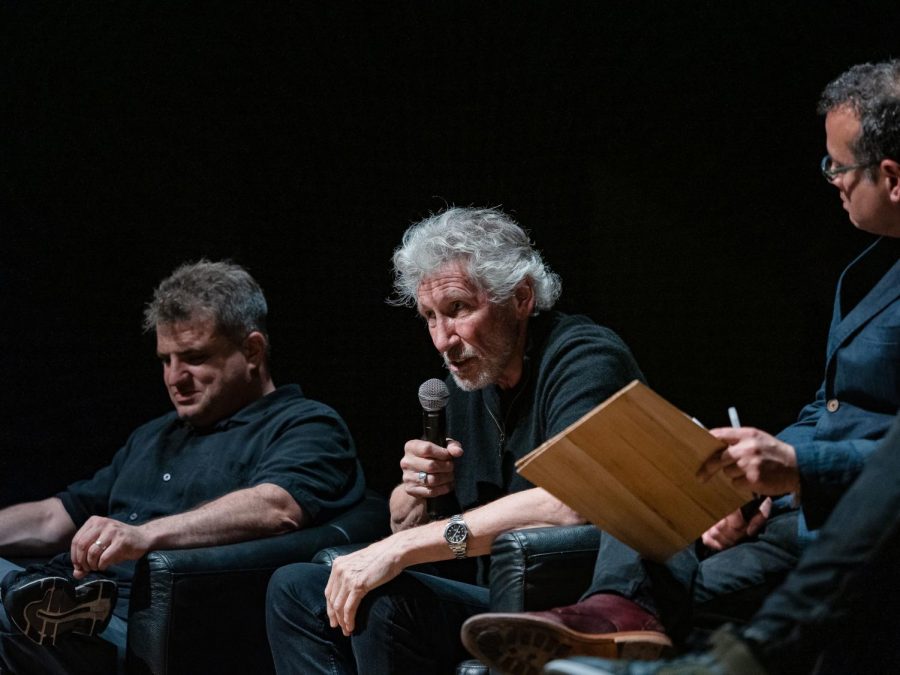 By Alvin Buyinza and Abigail Charpentier

Outside of the University of Massachusetts Fine Arts Center, hundreds of people from all over New England lined up to claim tickets to one of the most anticipated events of the spring semester,  “Not Backing Down: Israel, Free Speech and the Battle for Palestinian Human Rights” on Saturday evening.

The event, which featured Linda Sarsour, co-chair of the Women’s March and co-founder of MPower Change, Marc Lamont Hill, former CNN commentator and professor at Temple University, Roger Waters of Pink Floyd and Dave Zirin, sports editor for The Nation magazine, was aimed to address the Israeli-Palestinian conflict and issues of free speech in regard to the ongoing pro-Palestinian backlash within the political atmosphere.

Since its announcement, the event has garnered mass amounts of attention. Most recently, an anonymous group of students at UMass filed a lawsuit requesting a preliminary injunction of the event on the basis that the panel speakers “have a publicly known reputation for either being anti-Semitic and/or supporting known anti-Semites.” However, the injunction was denied by a Suffolk Superior Court Judge on May 2.

Despite the legal controversy leading up to the event, the Concert Hall at the Fine Arts Center was filled.

The event began with opening remarks from the communication department chair and professor, Sut Jhally. Jhally is also the executive director of the Media Education Foundation, the organizer of the event.

“I think it’s safe to say that very few events in recent UMass history have garnered as much attention and argument as this one,” Jhally said. “So the event actually has already served its primary function: to stimulate thought about… the discussion of the Israeli-Palestinian complex.”

Jhally then spoke about the lawsuit and thanked everyone who worked toward ensuring the panel would be put on, including Rachel Weber, the attorney from Northampton who spoke in court on behalf of Jewish Voice for Peace before the injunction was denied.

“It [the lawsuit] was not about this event. It was about the next one that may be planned by some other group. It was an act of intimidation and bullying about the future,” Jhally added.

Vijay Prashad, director of Tricontinental Institute and moderator of the panel, shared a few remarks on the situation before playing a video sent in by activist Angela Davis, who was unable to attend the panel in person. Prashad then read the “Zero Tolerance Policy” for audience members, warning them that they if they speak or interrupt speakers, they will be given three chances before being asked to leave.

Then, one by one, the panelists spoke for about 15 minutes about the work they have done and their thoughts on the lawsuit.

Waters told the story about how he first became involved with the issue in 2006 when he canceled a concert of his in Tel Aviv and moved it to an agricultural community halfway between Tel Aviv and Jerusalem, called Neve Shalom. Toward the end of the concert, he made a comment about how  “this generation of young Israelis is going to help us make peace with your brother and sisters in the neighborhood.” The crowd of 60,000 went from cheering to silent “in a heartbeat.”

“It was one of the most chilling sights I’ve ever seen in my life,” Waters said.

After Waters read a poem of his titled “Is This the Life We Really Want,” the panelists started answering various questions from Prashad, including ones about the Boycott Divestment Sanctions movement, activist-athlete Michael Bennett, Rep. Ilhan Omar and being labeled as anti-Semites.

One of the most heated moments of the night came when Hill was answering an audience question about hundreds of rockets fired into Israel earlier on Saturday. One audience member continued to interrupt Hill when he spoke and was asked by Prashad to leave after violating the “Zero Tolerance Policy.” Hill asked the audience member to stay and share their thoughts once he had finished speaking.

After the incident, Sarsour made the observation that the most opposition had been made against Hill, the only Black man speaking, during both his speech and his answers throughout the question and answer session.

“Sometimes you got to put it out there and as a Palestinian-American, I’m telling you that it’s better for you to wait and listen and then disagree, because you came here already with whatever. Give us a chance to speak and in fact, give the Black man a chance to speak,” she said.

The event ended at 9:30 p.m. with a standing ovation for the panel and members of the audience chanting “Free, free Palestine.”

Luiz Batista, 33, came to the event along with a group of neighbors and wanted to support the event after hearing about it on Democracy Now!, a popular radio show. Batista said he’s not on any “side” of the Israeli-Palestinian discussion and was coming to learn.

In contrast, his friend Lamia Barakat, 26, is on the “Palestinian side” of the discussion, however, much like Batista, she was also willing to learn from the event’s different perspectives.

During the wait before the event, slight tensions broke out between people, namely between supporters and dissenters of the event. Conflicts began when an individual passed out tote bags that seemingly looked in support of the event.

“I assumed [the tote bag] was from the organizers of the event,” said Sarah Perno, a UMass junior political science major, “and then when I opened it up, I saw the flyer, which was kind of against the event.”

The flyer claimed the event is “anti-Semitic,” and the Pittsburgh, Poway and Charlottesville synagogue terrorist attacks all started with attacks on Jews and Israel.

“I feel like that’s kind of deceptive of them to do that, it’s a little weird,” Perno continued.

Additionally, a few members of the line had pointed out on the lower left corner of each tote bag was written “This event made possible by” and directly beneath was the UMass logo next to the flag of Hezbollah, a terrorist organization in the Middle East.

Other members such as Ken Schneider, a resident of Rhode Island, came all the way here to see how much “hate there is.”

“I’m kind of amazed that there’s so many people [who] would come to something like this,” Schneider said as he wore the Israeli flag draped around his shoulders. “I can’t even imagine that people would want to hear the people that are speaking here.”

Referring to the panelists, Schneider believes that they are all “Israel-haters” and “Jew-haters,” due to what they “espouse” and what they say.