UMass softball looks to win first A-10 tournament since 2012 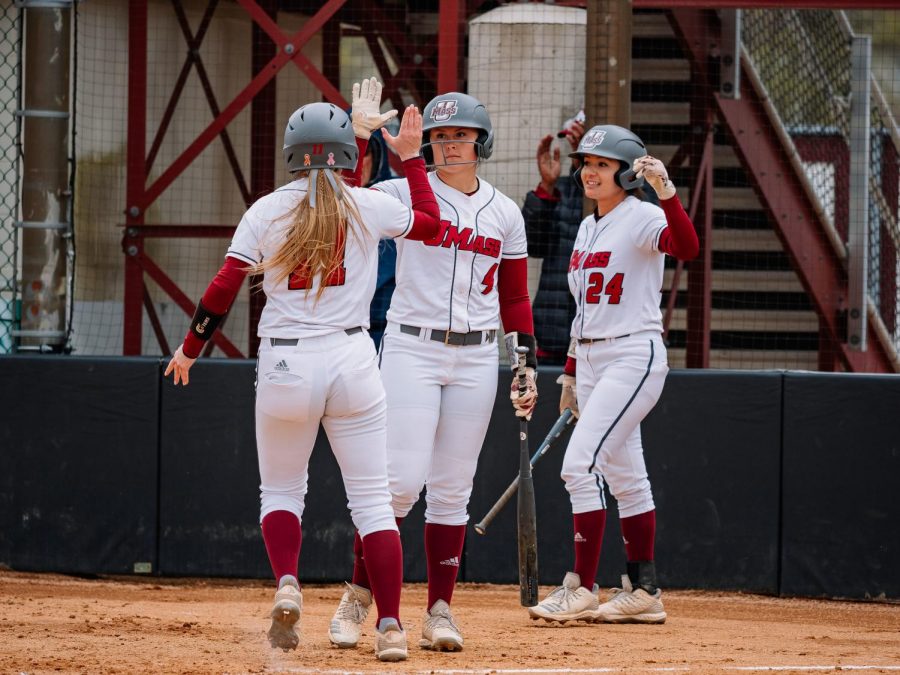 The Massachusetts softball team welcomes five other teams to Sortino Field starting Wednesday for the Atlantic 10 Tournament. UMass has earned a bye, finishing in second in the conference regular season with a record of 12-5, while rival Fordham is the top seed after narrowly beating out the Minutewomen with a 16-6 conference record.

UMass (25-20, 12-5 A-10) will face the winner of third-seeded George Washington and sixth-seeded Saint Louis on Thursday while Fordham will take on the victor of Saint Joseph’s and Dayton earlier that morning.

On paper, Saint Louis would be the easier matchup. George Washington has the best overall record out of any team in the A10 at 39-15. This can be attributed to the non-conference schedule, in part, but they still feature a deep and powerful lineup.

“We are so familiar with both teams,” senior Kaycee Carbone said. “They are both good teams, so I don’t really care who we see. I feel confident facing either team.”

During the regular season, the Minutewomen split their two games with Saint Louis and took two out of three against George Washington.

In their late March series, Kaitlyn Stavinoha had her way with Billikens’ pitching, going 6-of-8 overall and knocking in a couple of runs. UMass won the first game 8-5 but Quinn Breidenbach struggled in game two, allowing four runs and failing to record an out as UMass dropped its first conference game of the year 7-5.

Saint Louis is led by Sadie Wise at the plate, whose average eclipsed the .400 mark and currently sits at .410. She’s also added six home runs. In the circle, the Bilikens’ ace is Kallen Loveless, who has started 29 games, more than the other SLU starters combined.

The UMass-George Washington series was highlighted by a couple freshmen. In some of her first starting action of the season, Danielle Ellis seemingly could not get out, going 3-of-3 in the first contest when UMass did not have the bats going. Down 3-1, she scored when another freshman, Kendra Allen, picked the perfect time to hit her first collegiate home run to tie the game. The Minutewomen rode the momentum of Allen’s bomb to win the game in extras and dominated the second leg of the doubleheader, winning 14-1.

The Colonials would respond in a big way in game three, however, by hanging a 12-spot on UMass pitching as UMass fell 12-4.

GW’s stars are Jenna Cone and Sierra Lange. Cone leads the conference in homers with 19 and RBIs with 63. Lange’s stat-line is even more impressive. Not only is Lange’s .426 average tops in the conference as a hitter, she leads the A-10 in wins as a pitcher.

Despite the big names for the Colonials, the Minutewomen believe that being successful in the tournament is about controlling what they can control.

“We have to take that passion and use it against everyone,” Carbone said. “It needs to be the same no matter who we are playing. It does not matter what their jersey says. We have talked about it and we need to take that every single game.”

UMass is less familiar with the teams in the other opening round matchup. Saint Joseph’s was the only Atlantic 10 team not on the Minutewomen’s schedule originally, while when UMass traveled out to Dayton for a weekend series in April, the weather did not cooperate, and all three games were lost to rain.

The third team on that side of the bracket, UMass and the rest of the conference is very familiar with. Fordham comes into the tournament as defending champions for the sixth consecutive year. UMass has lost to the Rams in the championship game in consecutive years.

While beating Fordham to win the conference would be the ultimate revenge for last year, the Minutewomen are not letting themselves look ahead to a showdown with the Rams.

“They are our biggest rival and we want to beat them more than anyone,” Stavinoha said. “But we have to play game one to get to that game, and who knows? So, we just can’t focus on them, we need to focus on ourselves.”

During the regular season, UMass took two out of three against Fordham at Sortino Field. Breidenbach was brilliant, pitching two consecutive complete games earning a victory in both starts.

The Minutewomen will look to capture their first A-10 tournament since 2012 starting on Thursday. First pitch is set for 1:30 p.m.