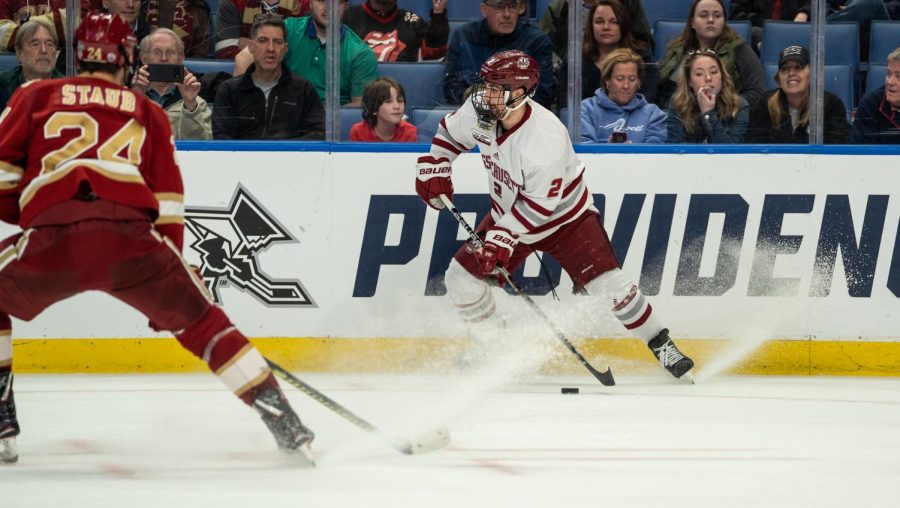 Jones, a highly touted incoming freshman, was drafted in the third round (68th overall) by the New York Rangers. Del Gaizo, coming off an impressive freshman campaign playing alongside Cale Makar, was taken in the fourth round (109th overall) by the Nashville Predators. Lindberg, whose efforts in net helped lead UMass to the national championship game last spring, was acquired in the seventh round (197th overall) by the Minnesota Wild.

The picks at Rodgers Arena mark the 28th, 29th and 30th selections in UMass history, while Jones’ selection at No. 68 becomes the program’s fourth highest draft pick ever. Upon their selections on Saturday night, the trio joins the likes of Cale Makar, Mario Ferraro and John Leonard as recent Minutemen draftees.

Jones is one of seven freshmen announced to join UMass on its upcoming roster in 2019-20. He comes to Amherst from the United States Hockey League, where he dominated right off the bat and was named Rookie of the Year. In 56 regular season games with the Tri-City Storm, he racked up 52 points on 45 assists and seven goals. After losing the back-end talent of Makar and Ferraro to the professional ranks, Jones will play a major role in helping fill the void on UMass’ blue line this fall.

Del Gaizo, who set a program record with 29 points in 41 games as a freshman defenseman last season, is set up for a promising return as a sophomore. Aside from his impressive stats next to the skillset of the 2019 Hobey Baker winner in his first season in the NCAA realm, Del Gaizo also scored the memorable OT-winner to advance the Minutemen to the national championship last season.

Lindberg was another freshman who played a major role in last year’s runner-up campaign. The Espoo, Finland native started seven of the final nine games in net for the Minutemen, generating a 6-2-0 record along the way with four shutouts. His back-to-back blankings of Harvard and Notre Dame in the NCAA Northeast Regionals propelled UMass’ run to close out its best season to date.