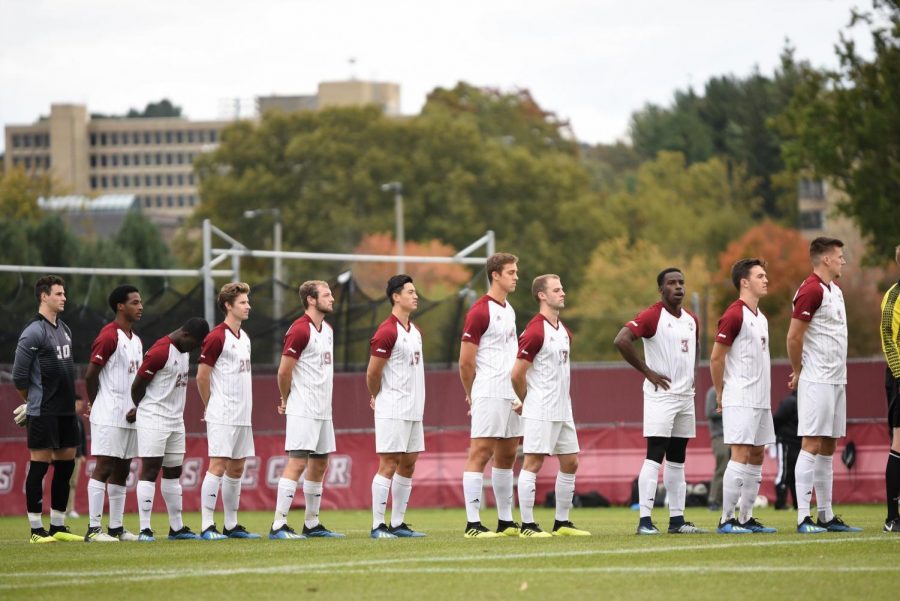 There is a fresh air of excitement and curiosity surrounding the Massachusetts men’s soccer team, almost unrecognizable from a year ago as it heads into its season opener at Northeastern University.

Entering the year, UMass has lost 13 players from last season’s squad, most notably Konrad Gorich and Brandon Merklin, the center back duo who were each named to All-Conference teams and won two trophies with the program. Hometown favorite and former leading goal-scorer Davis Smith also departed, transferring to Providence College following two stellar years with the program.

The Minutemen will be split evenly this season, anchored by a strong roster of 14 returning players along with 14 newcomers. UMass carries 18 freshmen and sophomores in 2019, only a couple of whom saw meaningful minutes last fall.

“We’ve lost a lot of talented players,” UMass coach Fran O’Leary said. “Guys who contributed a lot over the last few years. But there’s an excitement and new energy because there’s opportunities now. We graduated our entire back four, so there’s a lot of chances for people to win playing time. The new guys have mixed really well with returning players, returning players have done a great job in welcoming them, and now everyone is just competing.”

The returning core features some talented players, some of whom managed to find playing time in the crowded side last year, eager to see an increased role.

“Well, it’s a fresh start,” senior captain Ryan Saul said. “The guys that left last year set a standard for this program that we all have to try to follow in their footsteps and stuff, but this is a new team, new identity. All of the new guys that came in are full of energy, they’re willing to learn, to work really hard. That’s kind of the impression I’ve had of this team so far. We do have a lot to learn, but everyone is eager to learn, everyone is eager to work really hard, and that is really, really exciting. I think we have a lot to look forward to this season.”

UMass may have a glut of new players on the field, but that has not lowered expectations around the program when it comes to the finished product.

“We’ve got to get ourselves ready for the conference,” O’Leary said. “We’re trying to go five years in a row to the conference playoffs, which for us would be a great accomplishment. No doubt we’ll get some weaknesses exposed in the coming weeks, as we’re a new team, and like always we’ll try to fix those weaknesses and hopefully be ready come conference time.”

Losing two of the best defenders in the conference isn’t easy. Losing an entire back line that included those two defenders is significantly worse. The only players on the squad that featured on defense last year were Ryan Saul, who played heavy minutes when Konrad Gorich was out with an injury to start last season, and Jared McCleary, now a redshirt junior who has seen sporadic action in his two seasons with the program. Nathaniel Cardoza is a natural wing defender, but only saw minutes as an attacking winger last year, so expect him to also be in the mix on the back end.

“We’ve got a mixture of old players and we’ve brought in some talented new players, so they’ll compete,” O’Leary said. “We’ll send a group out this weekend, I think three of the back four this weekend will have been with us for a number of years and now is their time to stake a claim.”

It wasn’t just the defense that was depleted by the roster turnover. The attacking unit saw some major holes open as it lost last year’s top goal-scorer DeAndrae Brown and 2017’s top goal-scorer Davis Smith. The squad also lost Jack Fulton and Samuel Asamoah, two players who contributed major minutes on the attack.

From the group of returning players, only two, Yosuke Hanya and James McPherson, will have had experience playing for the side entering the season.

“We had a very good spring,” O’Leary said. “We won four out of five in the spring. James McPherson scored five goals in five games, so obviously we’ll be looking for him to have an impact. But it’s a collective. I think we look for goals. Any time we’ve been competitive, we’ve got goals spread throughout the team. Whether it’s defenders chiming in on set pieces, fullbacks getting assists from crosses, goals from the midfield or up front, we don’t care where they come from. We just want to make sure that we get some.”

The loss of so many senior players has impacted the Minutemen on the field, but it has also left many holes off of it. The players that left were mentors to the young guys for multiple seasons and their presence won’t be felt by the new class coming in. In their absence, some of the returners have stepped up to help the Minutemen gel together and show them what UMass soccer is all about.

“Some of the upperclassmen have to step up and be leaders because we don’t have many of them,” junior midfielder Eli Cronin said. “… I think we’re going to do really well. Fran kind of harps in on the freshmen really knowing what UMass is all about, what UMass soccer is all about. We’re a type of team that is not really technically the best, but we’ll always give 100% effort out there and 100% intensity through all 90 minutes. The freshmen seem like they’re getting used to that part of the program really well.”

The depth of upperclassmen in previous years prevented fans and spectators from really seeing some of the players that will step into major minutes this season. With so many spots opened up all over the field, expect many of the sophomores that didn’t get to play much last year, if at all, to compete for those starting slots.

“I think James McPherson, I think Nathaniel Cardoza are both guys, and then Cam Pattison had a terrific spring,” O’Leary said. “So there’s some of the guys, and Graham Brenner―so these are guys who are now going into their sophomore year and it’s a real opportunity for them all. As I said, James had a terrific spring, Nate’s just recovering from surgery so he’s back and flying about; he’s made a fantastic recovery. So we’re excited, now is the time. Now is their time to stake a claim and say ‘I can be a Division I varsity athlete’. This is their opportunity.”

The goal of the program is to stay competitive and improve. If the spring and preseason exhibitions are any indications of what the future holds, it will be an interesting season to watch.

The Minutemen open the season at Northeastern University Friday, August 30th at 2 p.m. at Parsons Field in Brookline, MA.