A-10 Notebook: Standings shaken up in A-10 men’s soccer 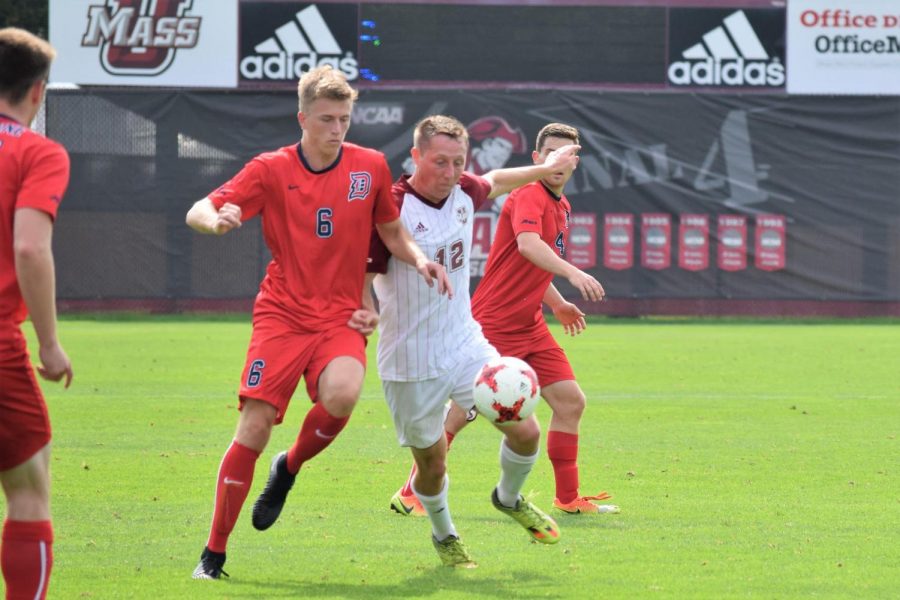 The Atlantic 10 has yet to start conference play, but with roughly five games in the books, the conference is beginning to shape up ahead of A-10 games.

It was a completely one-sided event in the Bronx, New York on past Saturday as the Fordham men’s soccer team dominated Holy Cross in a commanding 5-0 victory.

Fordham came out energetic in the second half, scoring four of its five goals in the last 40 minutes. Five minutes into the second half they scored their second goal which would set the tone for the rest of the match.

Bart Dziedzic, while only scoring one goal, scored in fashion with a beautiful shot off the crossbar and in with four minutes left to cap off the easy victory. The goal came only three minutes after Dziedzic provided an assist to McNamara who slotted the ball into the top right corner of the goal.

Fordham will travel to South Carolina for their next game on Tuesday, Sept. 17. Kickoff will be at 7 p.m.

Two first half goals keep Duquesne atop the Atlantic 10

Duquesne (4-0-1) earned a scrappy 2-1 non-conference victory over California Baptist (1-4-1) on Sunday in Pittsburgh.

Zach Hall opened the scoring for the Dukes, with a goal just past the two-minute mark in the first half with an assist from Nate Dragisich.

Four minutes into the second half, California Baptist would get onto the scoresheet. Forward, Tete Vacas scored after applying constant pressure throughout the game. Vacas had all four of his shots on target, showing his consistent accuracy and focus in the final third of the field.

Duquesne was awarded a penalty kick after California Baptist’s goalkeeper, Albert Escuin, committed a foul inside the penalty area, and was shown a yellow card. Moritz Kappelsberger converted the penalty, leaving the Lancers in a two-goal deficit heading into halftime.

Duquesne is quickly being trailed in the standings for first in the Atlantic 10 conference by Massachusetts (4-2-0) after impressive wins from the Minutemen. Both teams have four wins to their name but the Dukes one draw grants them placement advantage over the UMass’ one loss. They will face off against one another on Saturday, Oct. 17, in Pittsburgh.

The two universities have a rivalry dating back to 1972, and a Bronze Boot game also holds the record for largest attendance at an NCAA soccer game, when the Billikens faced the Cougars Oct. 30, 1980, in front of 22,512 spectators at Busch Stadium in St. Louis.

At the end of double overtime in front of 3,107 fans, freshman Kip Keller headed home the game winning goal for Saint Louis for a 2-1 win, crowning Saint Louis Bronze Boot champions for the year.

The Billikens opened the scoring quickly with a goal by senior forward Leo Novaes, assisted by Devin Boyce, in the 11th minute. Novaes also provided the assist off his cross to Keller for the game winning goal.

The Cougars would answer with a goal of their own 16 minutes later when Joergen Pettersen, a recruit from Norway, slotted one home.

Because NCAA rules and regulations set the overtime rules to golden goal —once one team scores the game is over unless time runs out — SIUE was not able to attempt once Saint Louis scored in double overtime.

The next head to head matchup between these two teams will be next year in a rematch for the Bronze Boot, where the Billikens hold a 22-5-2 lead in the series.